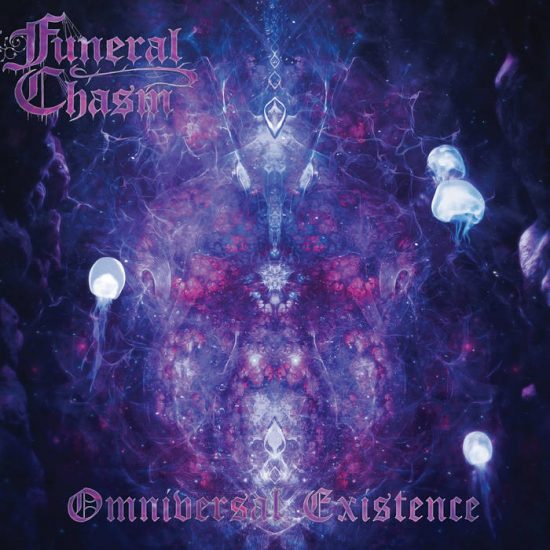 The song we’re presenting today from the debut album by the Danish duo Funeral Chasm is a formulation of funeral doom that seems to occupy a dream state between life and death. Haunting, harrowing, and beautiful, the multi-faceted track fashions both an experience of ghostly elegance and grandeur — and one of torment, turmoil, and ravaging upheaval.

At least lyrically, “Mesmerising Clarity” was based upon a pair of mushroom trips by the band’s Danny Woe, one so disturbing that he terminated the trip and a second that reached a point of completion and became therapeutic. Whether intended or not, the music seems to trace such an experience as well, though (as suggested above) the music is capable of generating other visions in the listener’s imagination, and of making other emotional connections. 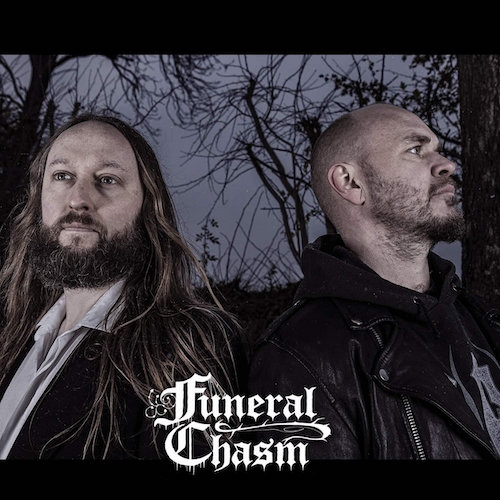 Funeral Chasm was formed in February 2020 by the afore-mentioned Danny Woe (Altar of Oblivion, ex-Woebegone Obscured) and his long-time friend Morten ”Sjaelepest” Lund (ex-Devil, ex-Kaos666). Both of them had played together in the black metal band Above Ravens but shared a desire to experiment with slower and more atmospheric music, and Funeral Chasm became the vehicle for that experiment.

After digitally releasing an initial EP that same year (later released on tape by Old Skull Productions), they’ve now completed a new album named Omniversal Existence, which will be out on July 2nd via Aesthetic Death. It draws influence from the music of such bands as Fields of the Nephilim, Sisters of Mercy, Celtic Frost, Burzum, Ved Buens Ende, Thergothon, and Vangelis — and you can detect many of those disparate influences even in the single song we’re premiering today.

In “Mesmerising Clarity” a slow and sorcerous guitar line winds through the sonic shimmer of organ-like tones and steady, hard-punching drums. The sound swells in volume and magnificence as piano keys glitter and truly abyssal growls rise up from punishing depths. There’s a sense of wonder inspired by these sounds, but the song seamlessly transforms into more desolate sensations; seething guitars build tension and the growls spear upward in torment.

The harsh vocals are replaced with intensely heart-felt singing that soars in the midst of a shining crescendo of grief, but the music continues to change, becoming hallucinatory and then calamitous, the vocals continuing to trade off between those monstrous roars and agonized singing, the drums detonating like bombs, and the backing sounds becoming saturated with fear and pain. Yet the song again becomes mist-like and mysterious, and the singing drops deeply before rising again like the wail of a bereaved phantom.

If there’s a unifying lyrical theme across the album, it has to do with Danny Woe‘s lifelong struggles with insomnia, alongside the anxiety, depressions and issues that arise from living with that illness. But as noted earlier, the song you’ve just heard is based on a more specific experience with mushrooms. He tells us:

“The lyrics for the song “Mesmerising Clarity” I wrote straight after coming down from a challenging mushroom trip. I hadn’t much experience at the time, so I decided to only take 3 g. Just to have a nice relaxing time tripping in my forest. I’ve had other sessions where I did 7-8 g, so I didn’t expect it to be that mindblowing. However, mushrooms can be deceiving in what they present to you, and the strain was way stronger than I anticipated, so I was completely thrown into another dimension. I purged (vomited) several times and the visuals were so strong that I couldn’t see straight and had to lie down on the floor. It got so intense that I actually decided to take a tripkiller. A thing I never tried before or after this one time. I came down after what felt like an eternity, and felt somewhat cleansed, but I didn’t really feel any resolution.

“Normally after a trip, I don’t feel the need to converse with the shrooms for weeks or months, but this time it was different. It felt unfinished. So I arranged set and setting for another session with the rest of the shrooms a week later, and made sure my goal was clear: to get through the trip and just feel the whole journey thoroughly. Alas, I dosed a little lower, but the come-up hit me hard again, and I continued exactly where I left off and stopped the last time.

“I braced myself mentally for the ride, took some fruit, nuts and water and wandered into the forest. One foot in front of the other. The trees breathed down my neck, and I felt extremely vulnerable and weak. I walked for maybe 5 hours straight, before I could feel the comedown rushing through me. I watched the sun set its golden glow over the cornfield by the forest, and felt a indescribable relaxing sensation throughout my body. I was completely exhausted mentally, but at the same time I felt strong and almost reborn. This therapeutic experience showed me (besides respect for the mushrooms) how to work through the harsh times, and I still use the experience to this day.”

Omniversal Existence was recorded by Danny Woe, was mixed by Christian Nørgaard, and was mastered by Greg Chandler at Priory Recording Studios. The cover art is by Cadies Art.

Below you’ll find relevant links, plus a lyric video for the album’s first single, “Sunrise Vertigo“. You can also check out the second single, “The Truth That Never Was“, at this location.