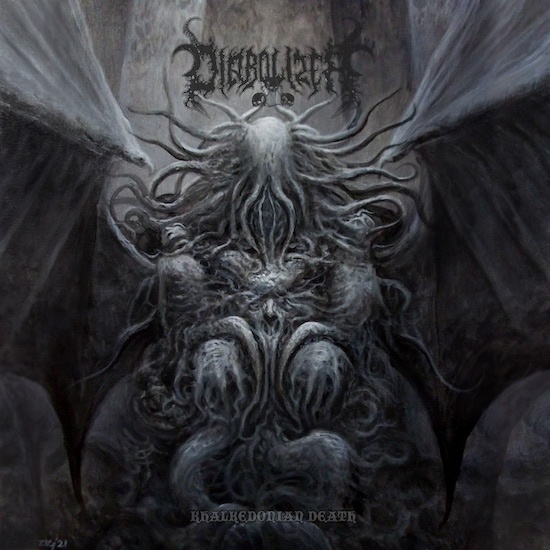 (Nathan Ferreira prepared the following introduction to our premiere of another song off the forthcoming debut album by the Turkish death metal band Diabolizer, due for release in early July by Everlasting Spew Records.)

I’m going to drop a name for you: Mustafa Gürcalioğlu.

If mentioning that name made the hair on the back of your neck stand up, you’ve probably already pre-ordered Khalkedonian Death and don’t need to read much more of this article. Good on you for knowing where to find the primo shit.

If that name inspired more confusion and curiosity than it did excitement, you’re exactly the person I wrote this for. To put it boldly, with the possible exception of Phil Tougas, there isn’t anyone else in the game right now who is as versatile and prolific while also maintaining a high quality standard for their music. Any new album from the four major projects he is involved in should be auto-buys (and the stuff he released with Burial Invocation is badass too!), and to make an even bolder claim, Diabolizer may be the best band of the bunch. 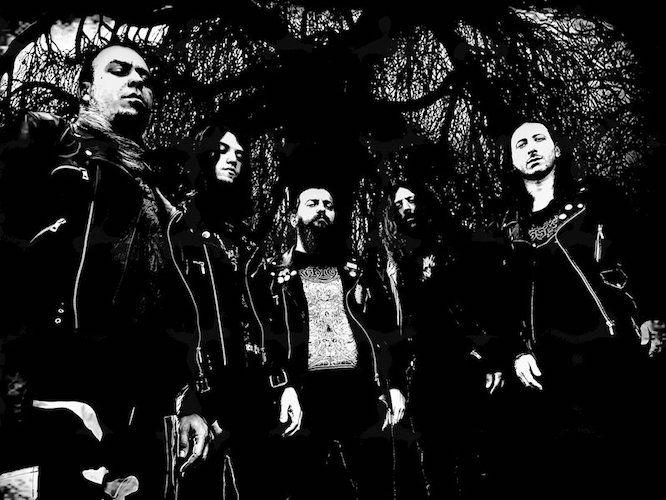 Formed in 2012, Diabolizer was created by Mustafa and drummer Aberrant with a desire to make music that was faster and more aggressive than anything else they had done before. At first, you wonder why they couldn’t have just channeled these ideas into one of their other projects, but it takes mere minutes for this thought to dispel as you’re immediately immersed into Khalkedonian Death. It takes the speed (and a few of the technical intricacies) from Decaying Purity, the brutal death metal component of Mustafa’s oeuvre, and mixes them with ’90s Floridian death metal and a dash of black metal in the tremolo.

There’s a few tools that the guitars borrow from the OSDM-focused Mustafa band Hyperdontia, though with less snaking in the riffs and more thick, stomping grooves instead. With music like this that is such a concentrated explosion of fury, it’s pleasantly surprising that the moments where they dial it back on Khalkedonian Death are the strong point in a style where normally they’re written through an obligation to balance out an album’s dynamics. The midpaced breaks in “Maelstroms of Abhorrence” (linked below) are absolutely decimating. Usually with stuff like this there’s certain riffs you tune in to and your attention will fade on the bridge-builders in between, but Diabolizer has this thing they do where they make each riff feel like it’s even better than the one that came before it.

This brings us to the nexus of why Khalkedonian Death is unbelievably good. When you block out all the background noise and get right down to it, metal is all about the riffs, and oh baby does this album ever riff. The secret sauce in the guitars (and pretty much all Mustafa Gürcalioğlu projects, really) is the juicy mids that cut through the haze like a meat cleaver chopping butter. In a sub-style of extreme metal that is so predisposed to turbulence and filling every possible hole of dead space with noise, underlining the most important part of your music is essential to creating something with replay value.

With all of my verbose fanboying above, you can imagine how excited I am have to have the opportunity to do the third track premiere for Khalkedonian Death and to introduce to you, the reader, the song “Cloaked in an Aura of Madness”, which also happens to be the third track on the album. Coming after the riff extravaganza that is “Maelstroms of Abhorrence”, the song showcases Diabolizer’s ability to pace themselves and keep a song interesting solely through subtle shifts in momentum.

The thunderous, familiar chug that makes up the main riff of the song is an idea you’ve heard tons of times before, but it’s got a ton of meat and just enough frills on the delivery to feel fresh. Moreover, even though I wouldn’t call this playful, you get a sense that the band is just having fun with it, like they’re playing the whole song while winking at you and smirking like a supervillain. All of this is couched in the boisterous fury of a ravenous man-beast hybrid that gets a sick sense of pleasure with everyone it disembowels.

The song also features the nastiest bass line on the album, with the performance of Malik Çamlıca in general being an underrated feature that adds a new dimension and covertly provides the album with a lot of that meatiness I love, standing out in a genre where it’s especially difficult for bassists to properly make their mark. There’s a reason Malik was also tapped for duty in Hyperdontia and Decaying Purity – the man knows what he’s doing.

Khalkedonian Death comes out on July 2, 2021, on CD from Everlasting Spew Records, with a tape release on Dessicated Productions, and a vinyl edition via Me Saco un Ojo. The album was recorded by Ozan Yildirim and features cover artwork by the ubiquitous Jon Zig. Diabolizer is recommended for fans of Severe Torture, Deicide, Sinister, Hate Eternal, and anything else Mustafa Gürcalioğlu plays in. More to come on this one-man riff factory soon…

5 Responses to “AN NCS PREMIERE: DIABOLIZER — “CLOAKED IN AN AURA OF MADNESS””