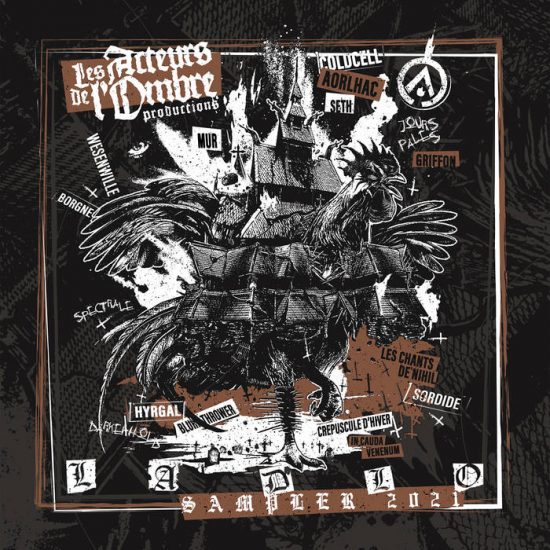 Did you think there would be no SHADES OF BLACK today? If so, you were very nearly right. I had a repeat of the Friday-night/Saturday-morning experience which I reported in yesterday’s video roundup: going out with a big group of friends last night, staying up really late, overindulging intoxicants, and sleeping like a hibernating bear until very little was left of this morning. I nearly decided to just abandon this column for one Sunday. But the old NCS obsessive-compulsive disorder finally wouldn’t allow that.

So what did I hurriedly decide to do? I decided to pick three new songs off a giant sampler released on Friday by Les Acteurs de L’Ombre Productions.

The sampler includes 24 songs. It’s available on digipack CD if you buy something else from LADLO. It’s also available as a “name your price” digital download at Bandcamp. It includes a lot of song premieres from forthcoming LADLO releases in addition to songs from albums that are out now.

I haven’t yet made my way through the whole sampler or determined the full list of songs that are brand new. So far I’ve noticed a half-dozen new ones. But for this hurriedly prepared SHADES OF BLACK I focused on three bands who are new to the LADLO roster — Hegemon, Adoperta Tenebris, and Corpus Diavolis. All three are French black metal bands, and all of them have new forthcoming albums. I thought all three of the song premieres from those bands were tremendous, and so that’s what you’ll find below. I wish I had time to provide mini-reviews of what you’ll hear.

I also encourage you to check out the sampler as a whole. Among other things, it includes advance songs from new records by Aorlhac and Pensées Nocturnes (the latter is a live album), and tracks from a new split by Limbes (formerly known as Blurr Thrower) and Mütterlein from Debemur Morti Productions. And that’s just the new stuff I know about so far.

You can pick up the sampler here:

And now for those three songs I picked. The Hegemon track is from a new album named Sidereus Nuncius. The Adoperta Tenebris song (which features Mephisto from Natremia on vocals) is from a new album entitled Oblivion: The Forthcoming Ends. And the Corpus Diavolis track is from a forthcoming album named Apocatastase. I’ve included Facebook links for the bands, along with the streams. Enjoy! (and forgive me for not doing more with today’s edition of this column)