(Andy Synn continues his long-running love affair with Amenra by delving into their unusual new album, which is set for release this Friday on Relapse Records)

There’s a certain type of person, and I might be one of them, who seems to think that Amenra can do no wrong.

And, truth be told, a quick glimpse at the band’s history would seem to prove them/me/us right.

But just because the band have yet to disappoint doesn’t mean you should think you know exactly what to expect from them, especially when it comes to their new album, De Doorn. 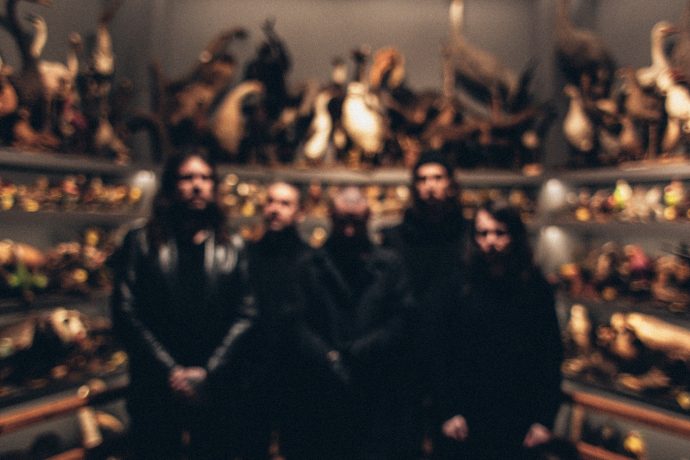 The eagle-eyed amongst you will have quickly noted that Amenra’s latest record is the first in their long career not to bear the title of “Mass…”, and there’s a good reason for that.

Not only does it have a different feel to the band’s previous works – more reflective, more introspective, but somehow also more expansive – but they also themselves freely admit that its genesis and its creative approach were both far different from their normal way of working, resulting in an album that, while not a total reinvention by any means, seems to represent a subtle, but purposeful, inversion of the group’s signature sound.

You can hear this immediately during opener “Ogentroost”. Whereas previously the band’s use of atmospheric elements would have been largely in service of their increasingly anguished and angst-ridden bouts of fury and frustration, here the reverse is true – the dynamic has been flipped and turned inside out so that it’s the brooding ambience which takes centre stage, moment by echo-stained moment, with the eventual eruption of metallic darkness serving more as a climactic release for the gathering tension which has been built up.

Yet even when the band do drop the doom-laden hammer, as they still do at key moments throughout this album (with cathartic centrepiece “De Evenmens” being perhaps the closest to “traditional” Amenra in this regard), there remains a much greater focus on negative space – the gloomy gaps between the crashing chords, the drawn-out, breathless pauses between the vocals, the lengthy passages of eerie, enigmatic emptiness – than we’ve seen or heard from the group before.

And while not a concept album per se, De Doorn definitely has the feel of one, the sense of a single, coherent story being told through discrete, but interlinked, chapters, whose overarching atmosphere, from its plethora of sombre, spoken-word vocals, to its evocative interplay between clean and harsh vocals (with the former taking on more prominence than ever), is meant to be experienced as a singular, unbroken whole.

Much like the way in which the band themselves are both a unique, discrete entity and one arm of a larger collective, De Doorn is a record that feels very much like a creative offshoot of Amenra’s own established legacy, a fork in the road, a branch on the tree, that may or may not bear further fruit in coming years.

Because of this it’s difficult to compare it to the group’s main discography, as it requires a different set of ears, a willingness to fully embrace this more atmosphere-focussed version of their sound – without which the dreamlike delights of a song like “Voor immer” will doubtless go unheeded and unappreciated – to truly understand what the band were going for here.

It’s not going to be for everyone (not even all the band’s existing fans), and if it’s not for you that doesn’t mean there’s anything wrong or that you’re somehow lacking. It just means, quite simply, that it isn’t your thing.

But even if it seems that way at first, I still recommend giving it some time to really sink in. It’s a slow-goer, and a grower, and one which both demands and deserves that little bit of extra attention and dedication to fully unlock all its secrets.

And, you never know, given enough time you might find that it begins to open up for you too.