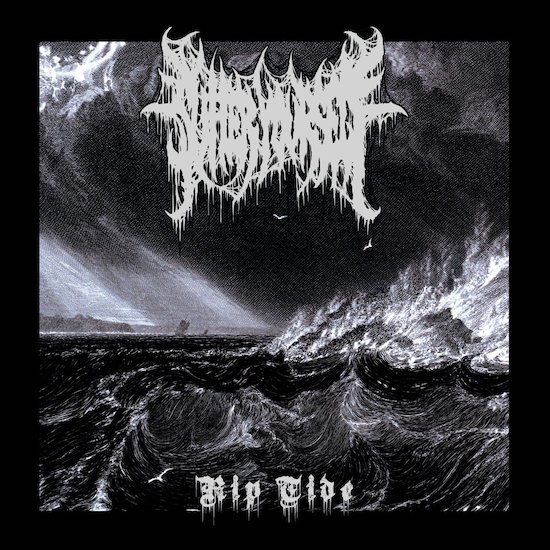 During a falling or ebbing tide the outflow of water through constricted channels can create a powerful surge capable of carrying a person caught within it far offshore, or dangerously submerging them in the surging flow, with little ability to escape and find air once again. This phenomenon is called a rip tide — and when you listen to the remarkable new album by Suffer Yourself you will understand why they chose Rip Tide as its name.

This multinational funeral doom collective, which first began as the solo project of Polish musician Stanislav Govorukha and then blossomed, like a night-blooming flower, into a full band, has released two previous albums, 2014’s Inner Sanctum and 2016’s Ectoplasm. On this third one, they’ve expanded and altered their musical range in ways that bring them closer to the deathly terrain of such bands as Esoteric and Evoken — though it would be a mistake to push that comparison too far, because Suffer Yourself possess their own distinctive identity and have drawn within their music a multitude of stylistic and tonal ingredients that make each song different from the others and the album as a whole an unconventional experience.

You’ll be able to discover all of that for yourselves today, because we’re now premiering a full stream of Rip Tide on the eve of its release by Aesthetic Death. 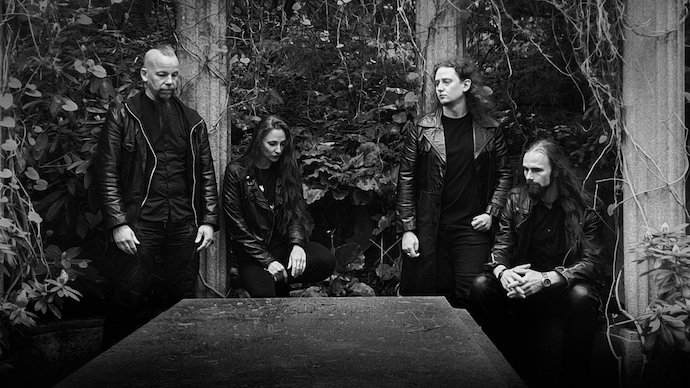 The album consists of three tracks, the centerpiece of which is the opening song “Spit in the Chasm“, an astonishing 20-minute monolith. Unlike some other formulations of funeral doom, the song creates a tremendously frightening atmosphere, due in part to the horrifying vocals, which range from predatory blackened howls and screams to monstrous, cavernous roars. But the music’s terrors also derive from the immense, crashing and crushing, chords, the bone-splintering impact of the drumming, and the eerie, desolating wail of guitars and cello.

As a 20-minute song, “Spit in the Chasm” undergoes transformations. In softer passages, the cello weeps in grief, barely comforted by the bass. In its more destructive moments, the song savagely jolts the listener in electrifying (and highly headbangable) fashion or slowly and methodically pounds with earth-quaking force, as if bent on reducing giant boulders into rubble. Slow, streaming melodies flow across the decimation like miserable poltergeists, lost in the ether, lending the music an unearthly and desolate aura. And by contrast, the guitars also shiver in shrill paroxysms of pain and madness.

Once you hear the song, any doubts you might have about why the band chose to begin the album in such daunting fashion will be erased. It’s the kind of music that’s so transfixing that it’s very easy to lose track of time passing. You reach the end, confounded — did 20 minutes really just go by? And at least in the case of this writer, my first impulse was to experience it again.

But whether immediately, or after being pulled into the rip tide of “Spit in the Chasm” again, you’ll reach the second track, “Désir de trépas maritime (Au bord de la mer je veux mourir)“, which Google Translate renders into English as “Desire for maritime death (By the sea I want to die)”. After the immense maelstrom of the opening track, it shifts the sound, creating a melancholy dream. The bass and drums are diminished, allowing a place of prominence to the slow bowing of the cello and the magical gleaming ring of the guitar.

But the song changes. It become heavier and more harrowing. Distorted chords create a sense of paralyzing peril; the melodies become manifestations of anguish and agony on the verge of derangement; and those monstrous growls bring cruelty to the misery. On the other hand, distant droning tones, dissonant radiations, ghastly spoken words, and lonely piano keys create a special chill on a wind-scoured coast of death.

And last, the album reveals “Submerging“, which is the shortest piece and just might be the most frightening. Its collage of ambient sounds and distorted voices spawns visions of a drift into a watery underworld, a slow drowning in the midst of water-bound wraiths and spectral lights.

So maybe you get the sense from these words that Rip Tide isn’t conventional funeral doom. It’s a multi-faceted experience that exerts a powerful, ice-cold, grip that pulls you out, far from shore, and has the power to haunt a listener long after it ends.

I want to share this further detail about the album from the PR materials: “Throughout Rip Tide there is an undercurrent of suffocating drone – with all tracks being built upon the claustrophobic foundations of a drone score created by Belarusian artist UGASANIE“.

Suffer Yourself is composed of Lars Abrahamsson (Guitars), Kateryna Osmuk (Drums), Johan Selleskog (Bass), and of course Stanislav Govorukha (Guitars, Vocals), who also produced and mixed the album (it was mastered by Greg Chandler). The marvelous cello parts were performed by Jiro Yoshioka, and the drones were created by the afore-mentioned UGASANIE (Pavel Malyshkin). The artwork is a fragment from “The Mew Stone at the Entrance of Plymouth Sound, Devonshire” by J.M.W. Turner (1816).

The album will be released by Aesthetic Death on June 25th.

4 Responses to “AN NCS ALBUM PREMIERE (AND A REVIEW): SUFFER YOURSELF — “RIP TIDE””