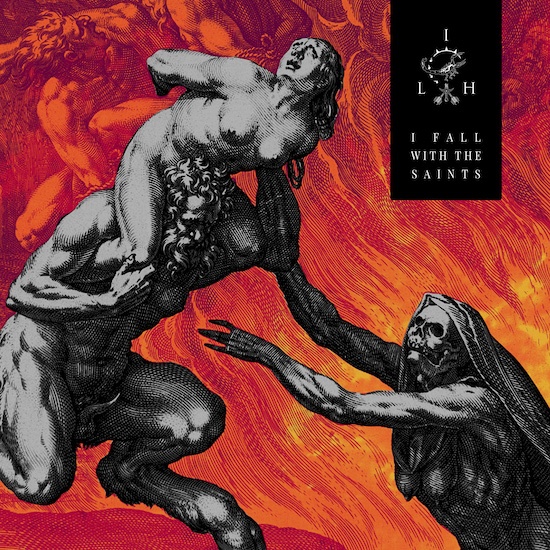 2021 marks the 20th anniversary of the fascinatingly distinctive Italian black metal band Laetitia In Holocaust. To celebrate the occasion, the band have recorded a new three-song EP entitled I Fall With the Saints, and Brucia Records is releasing it on a limited run of tapes, along with a book that includes photos and an exclusive interview with the band covering much of their history. Today, in addition to sharing this news, we’re reviewing the EP and premiering one of its three songs, “Hair as the Salt of Carthago“.

For those who may only now be discovering this band despite their longevity, Laetitia in Holocaust was formed in 2001 by Stefano G. and Nicola D.A. That duo self-released two demos, one EP, and two albums before being joined by drummer Marcello M. for the release (by Third I Rex) of the remarkable (and enormously surprising) Fauci tra Fauci in 2019, which we had the thrill of premiering here. And they followed that with the release last year of the transfixing Heritage (via Nifihel Records).

It’s possible to make comparisons of this band’s idiosyncratic creations to the avant-garde stylings of a few other bands, but the truth is that they really don’t sound like anyone else I’ve encountered. Trying to sum up their music in succinct sentences would be a daunting challenge. Forgetting the music after you’ve heard it would be an impossibility. This new EP is a vivid demonstration of all that. 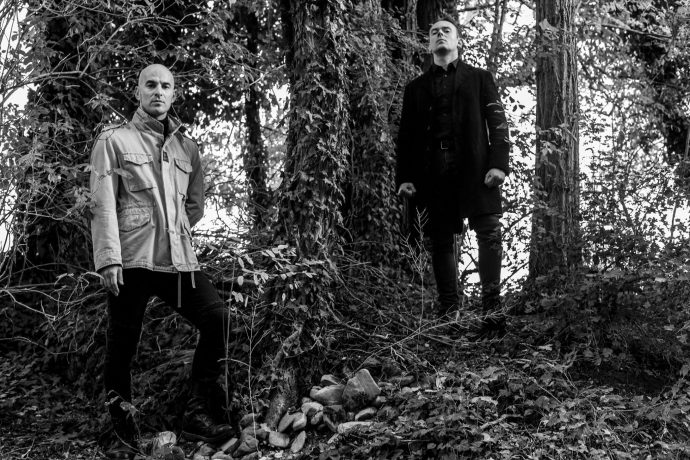 The band have given us comments that elucidate the inspirations and meanings behind the new EP’s three tracks, and I’ll begin with those before furnishing my own impressions of the music:

“The dream of falling in the eternal fire, in great triumph, watching around burning holy bodies falling and screaming, while the dreamer copulates with a goddess which moans and rejoices.

“We think that the “I Fall With The Saints” EP it’s a quite strange release for LIH: three songs and three completely different feelings and lyrics.

“The title track, a delirium of destruction and blasphemous power; ‘Crypts of Rain and Confabulation’, the last of the trinity, an oniric and visionary dialogue with dead souls; and then ‘Hair as the Salt of Carthago’, an old song.

“It’s unusual for LIH to revisit past creations. This one was firstly released as the opening track on The Tortoise Boat, the most disturbed LIH album to date. It’s a lyrically obscure song, a misanthropic enigma, along with bizarre musical parts, badly recorded vocals, drum machine and guitars without distortion. Now we have taken this sinister oddity and completely revisited the general sound, vocals, arrangements, interpretations, lines. We think it has a special taste, a special power”.

Speaking of power, the production of sound on the EP gives it bracing clarity bonded to tremendous visceral force. This quickly becomes evident through the title track that begins the EP. “I Fall With the Saints” is a big rumbling juggernaut powered by enormous yet mercuria bass lines, clobbering drum progressions, and brazen, blazing riffs. Scorching vocal vitriol; ringing, quivering, reptilian guitar leads and solos; and murmuring fretless bass tones enhance the song’s atmosphere of supernatural menace, and bursts of machine-gun percussion and feverish fretwork shift the mood into one of convulsive derangement. It’s an eerie and dangerous experience, yet one that creates a kind of weird glamor that’s powerfully seductive.

And then we come to “Hair as the Salt of Carthago“, the song that’s the subject of today’s premiere, the old one that LIH re-arranged and re-recorded to give it new life. Almost immediately, maniacal bass throbbing, riotous drum racing, and flickering, darting, and swirling guitars generate sensations of wild and exultant derangement. The vocals are still a cruel and vicious assault, but choral screams, the bubbling of the fretless bass, and surges of jolting, start-stop dissonance all combine to channel a feeling of frenzy that’s both unsettling and electrifying. The guitar gibbers in shrill tones like the bleating of a madman as the drums rapidly attack, pause, and attack again. The bass takes the spotlight near the end, backed by sounds of searing, unhinged glory.

And finally, the band deliver a strange twist in the path of the EP with the hallucinatory “Crypts of rains and confabulations“. Peculiar electronic vibrations rise and fall against a backdrop of spacey synths and a collage of glimmering ambient radiations, providing the pulse of the drumless music. Chilling, gasping growls shiver the spine with their demonic utterances, and glistening reverberations increase the aura of mystery. Incantatory singing lends the music a dimension of ritual, and xylophone-like chimes, given a space all their own, create the strange finale.

Laetitia In Holocaust are…

…and we wish them a very happy anniversary.