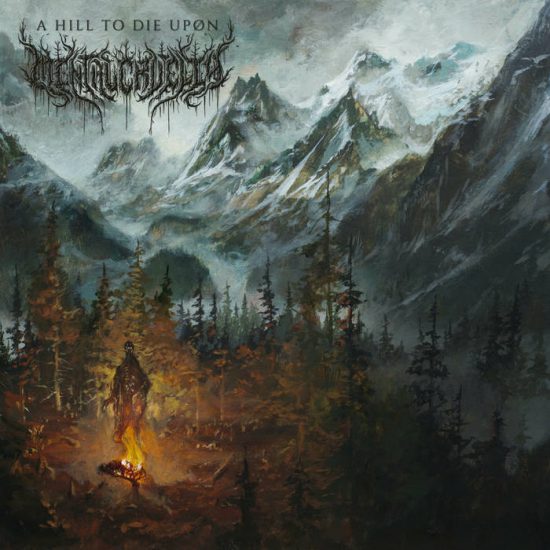 (We present DGR’s extensive review of the new album by Germany’s Mental Cruelty, which Unique Leader released at the end of May.)

For the sake of complete transparency this one is going to begin with a minor confession; One of the driving reasons for the choice to deep-dive German group Mental Cruelty‘s newest album A Hill To Die Upon is because the idea made me laugh.

It’s no fault of the band themselves, who are in the midst of something of a soft re-branding on their latest album, having shifted further and deeper into a symphonics-assisted world after two albums of whirlwind brutalizing deathcore. It’s because around here we’re fans of the black metal group A Hill To Die Upon, and something about seeing those words – admittedly a common phrase – on an album cover with a logo gave me the fun sort of “world-inverted” dynamic that you’ll see put to use in comedy from time to time.

So, in the sort of drunken crashing around that normally determines whether I’ll glance at a band, sometimes it’s some strange coincidence, no matter how stupid or small, that manages to catch my attention. 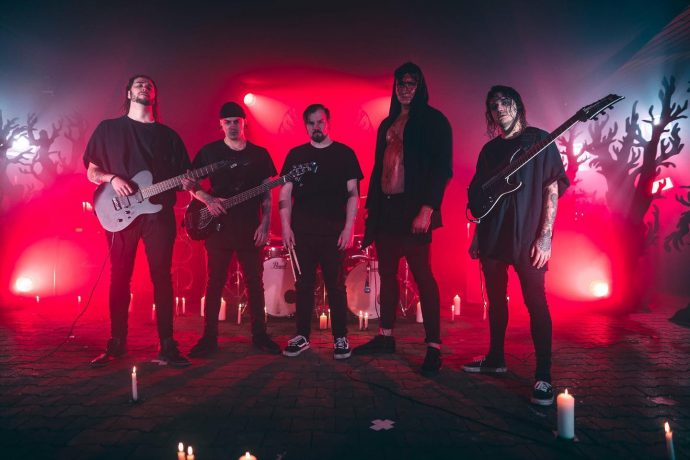 Of course, Mental Cruelty are an entirely different beast than the aforementioned black metal group — younger upstarts on their second round with Unique Leader and coming out of the gates with a much grander focus than what was present the first time around, and placing them well within, if not way at the forefront, of their peers on the strength of some remarkably catchy songwriting and a vocalist who has a knack for knocking out just about every line with the sort of ease that would make one jealous.

As metal continues to evolve and mutate it’s been interesting to watch as its more -core oriented offshoots also sprout new limbs and feelers as a way to adapt to whatever direction the scene might be headed at the moment. Like tech-death prior to it, it has seemed like the deathcore offshoot in particular has been in an arms race, a quest for heavier and heavier fields, often absorbing so much from other influences that bands find themselves caught in a hurricane where they otherwise wouldn’t have found themselves, for the sheer fact that they occasionally like to play a chugging riff. Observing as that particular subset of metal has reached out in a variety of directions has made for a fun exercise. Right now it seems to have resulted in something of a three-pronged pathway.

One is groove-oriented and actually a little lighter in overall tone, where Fit For An Autopsy seem to be carving their path with a heavy helping of inspiration from Gojira’s guitar-sliding and snake-writhing riff style. The second is the more caustic and low-speed approach, with the sort of sneering “fuck you” that a band like Black Tongue seem to inspire. And the third seems to have taken a cue from symphonic death metal’s approach, in that it has become all bombast all of the time. It’s big, brawny, loud, and very blunt, with a melodic tinge.

In the midst of those three evolutions you currently have the maelstrom of brutal death and death-core bands all dancing around each other like atoms bound to eventually collide. This is where Mental Cruelty currently are with their latest release A Hill To Die Upon, after having laid a pretty good blueprint with their two previous albums. It’s a much darker approach than before and even more overtly Satan-themed than in their earlier works, at times giving A Hill To Die Upon an overarching theme that works particularly well for them. 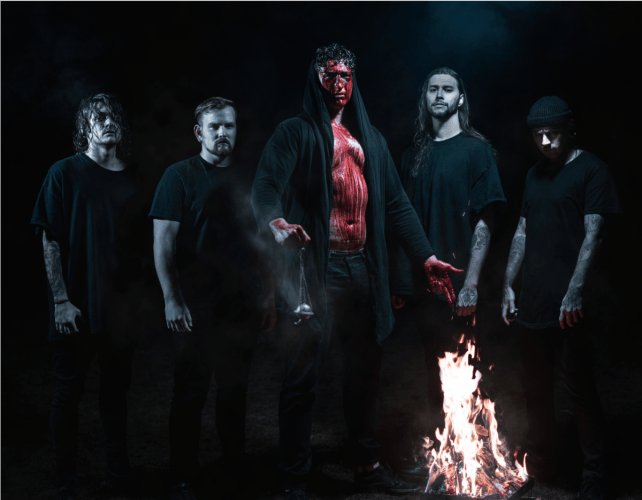 In many ways, Mental Cruelty are the latest speakers of a commonly known tongue, the latest re-shapers of a well-drawn blueprint whose components are long known, the re-designers of machinery that has been proven to work for a few decades now. You’ll notice this immediately in A Hill To Die Upon‘s first few songs, especially as the album shifts gears from acoustic opener “Avgang” into something much more recognizable in the bear-mauling that is “Ultima Hypocrita”.

It seems like the backing symphonic work is further evidence that a lot of groups took notice within the past decade of what bands like The Breathing Process (now fellow label mates, due to the recent announcement that their new one Labyrinthian will be out via Unique Leader)  were working toward, and have decided to run with it. Given the rise of groups like Shadow Of Intent, though, it makes sense that many of those bands may not be getting their time to shine. We’ve finally cycled around to those who felt a little ahead of their time now being current.

Like many of the songs on this new album, “Ultima Hypocrita” hits like a jackhammer, and the band are more than happy to serve that purpose. As an opening number meant to introduce everyone to the group’s much darker ambitions than before, it’s very effective. While they overfill the cup during “Ultima Hypocrita”, it spills plenty over into the songs that follow it.

If it seems like “Abadon” comes out of the gate swinging, that’s because it picks up the baton in the breakdown-relay and runs with it for a pretty beefy near-six minutes. It is one of Mental Cruelty‘s lengthier sagas on this disc, with only closer “The Left Hand Path” (more on this weighty fucker later) crushing it in run time. However, it does make a pragmatic sort of sense that “Ultima Hypocrita” and “Abadon”-follower “King Ov Fire” were chosen as lead-off singles, because “Abadon” serves as a mighty bridge between the two – or an explosive charge if you wanted to treat it like mining, and say that “Abadon” basically blasts through multiple geologic layers to unveil the more surgically violent following song.

A Hill To Die Upon is one of those albums where the instrumental track is a welcome breather. Most of the time the instrumental number inhabits the “oh this is pleasant” segment of the brain whenever it pops up on a disc, but it’s rare when they have the staying power one might want. In this case, after spending the better part of twenty-five minutes being caught in an in-progress avalanche, it’s nice to get a breather before the last three songs.

When you consider that the previously mentioned “Left Hand Path” lies in that subsequent mix, and how fully it uses its seven-plus minutes to close out A Hill To Die Upon, that song alone could have justified the break. But of course you have to wrestle through a grappling match with the two songs before it.

Since Mental Cruelty apparently felt that things weren’t overtly Satanic enough, “The Left Hand Path” treats you to what is basically the whole album summed up: You’ll get a surprisingly catchy melodic line, some of the heaviest vocal work combined with some of the most violent start/stop tempo-switching the band have in them – near neck-snapping at times – and you’ll get hit with a multi-pronged attack that has everyone in the band creating their own particular highlight. Like the genre as a whole, it’s a big, booming spectacle, and has become one of this writer’s more frequent go-to’s along with “Death Worship” and “King Ov Fire” from this same album.

Released back in May, Mental Cruelty’s A Hill To Die Upon is the latest among a humongous slab of signees with Unique Leader to lean heavily into the crushing and pulverizing side of the -core scene. While the label still has a solid lineup on the brutal and tech-death fronts as well, this newer batch has been on a pretty steady release of about one per month. Save for Alustrium’s latest high-speed pyrotechnics showcase, these must have been on the V-shaping weight benches by sheer force on the heaviness scale.

A Hill To Die Upon sits well among its peers, I’ll likely bring it up by way of comparison in future write-ups, as it seems like 2021 is going to be heavy on the prefix-core scene after the flaming shitshow that was last year. If you caught me joking about having a review slate called “deathcore power hour” a while ago, this was one of the ones I was referring to. Mental Cruelty, in that context though, shed a pretty healthy amount of straightforward brutality in favor of sheer bombast and crushing spectacle.

If it seems like their new one is a big album, that’s because every element present here is outsized in an extreme measure: The production work is huge; the symphonics sound grand and provide much of the melodic work; the vocal work between their main guy and the rest of the band is intense; and the music just moves from one bludgeoning hammer to another. It’s a ton to take in, but if you’re looking for one of your “heavy machinery knocking over boulders” style of albums this year, A Hill To Die Upon is a strong candidate.

One Response to “MENTAL CRUELTY: “A HILL TO DIE UPON””