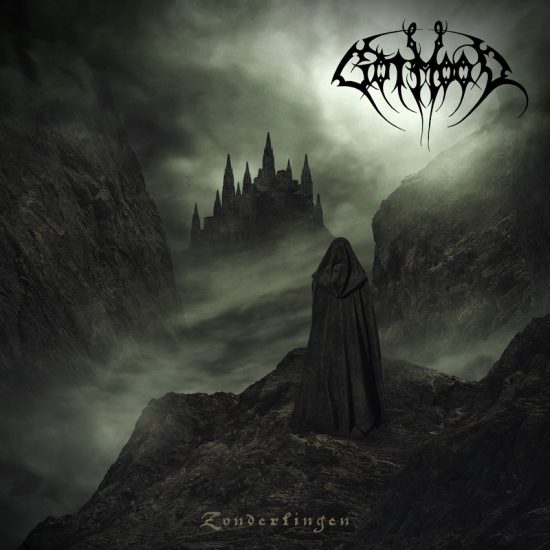 Here in the US we’re in the midst of a big weekend holiday, the biggest of the summer in normal times, and in this time also a celebration of release from covid bondage, though whether it’s anything more than a temporary furlough remains to be seen. But here at NCS I pride myself on observing no holidays, only hangovers. And since I don’t have one today I decided to get a head start on what has turned out to be a two-part edition of this column.

What I’ve chosen for Part 1 are four songs from forthcoming albums, and one from an album that’s been out for five months. I’ve thoroughly enjoyed all of them. Though Part 2 isn’t written yet, what I have in mind is a selection of recent new full releases. Barring a hangover, it will arrive in the usual spot on Sunday.

To begin, I decided to celebrate a different incidence of independence than the one our holiday here commemorates. To explain, I’ll summarize the historical background, which I learned from investigating the Dutch lyrics to this opening song, “Verheft het Vaandel” (“Raise the Banner” in English), by the Flemish band Gotmoor. 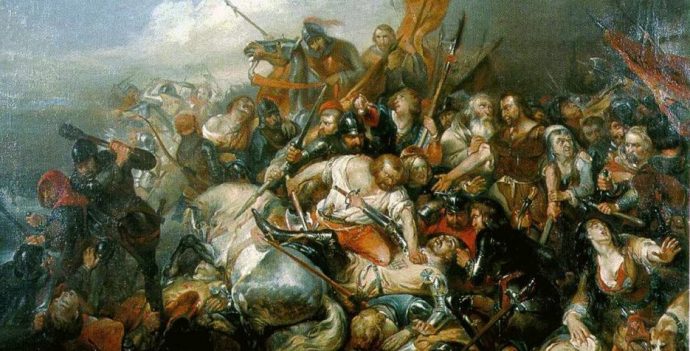 Through a bit of tedious work with Google Translate, I discovered that the opening explanation in the following lyric video concerns the invasion of Flanders in 1302 A.D. by the French army, directed by King Philip IV. In the French assault on the town of Kortrijk, and against all odds, a militia of unmounted Flemish farmers defeated a cavalry of knights on horseback in what became known as “The Battle of the Golden Spurs”.

In doing some further reading at The Font of All Human Knowledge, I learned that the French had mounted a series of invasions of Flanders between 1297 and 1302, which led to France successfully conquering and occupying the country. But a Flemish insurrection began in the spring of 1302, and soon only a couple of cities remained under French control, including Kortrijk.

When the Flemish besieged Kortrijk in July, the French sent a powerful army of knights to crush the rebellion, and that’s what led to the clash of forces in an open field on July 11 in the battle referred to above. (The 500 pairs of spurs that were captured from the French horsemen gave the battle its popular name.) The French defeat returned full independence to Flanders for the next two years. 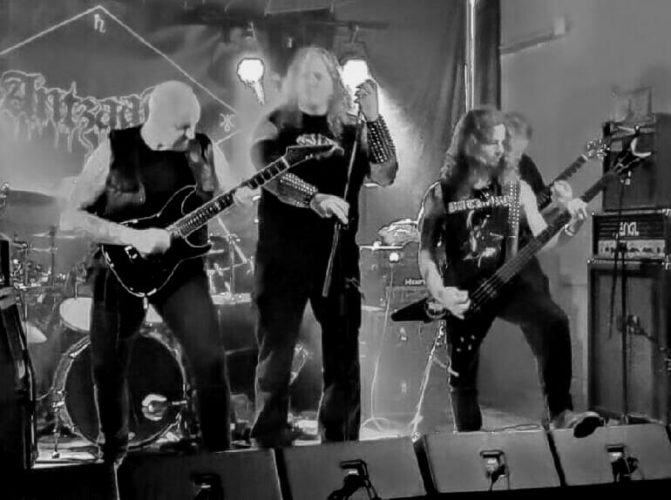 With such dramatic and inspiring events at its heart, it’s no wonder that “Verheft het Vaandel” is such a dramatic, grim, and ultimately valiant piece of music. You get a sense of building determination in the song’s momentous opening, and of fiery passion in the hammering drums, fierce riffing, feverish leads, and savage growls that follow. It’s further fitting that the melody has a bit of a medieval air to it. This one got its hooks in me deeply the first time I heard it, and I’ve gotten the same thrill every time I’ve repeated it over the last week.

The song appears on Gotmoor’s second album Zonderlingen, which followed their first full-length by nearly 16 years. The new record was released in February 2021 by Headbangers Records, though I’m only now discovering its existence. 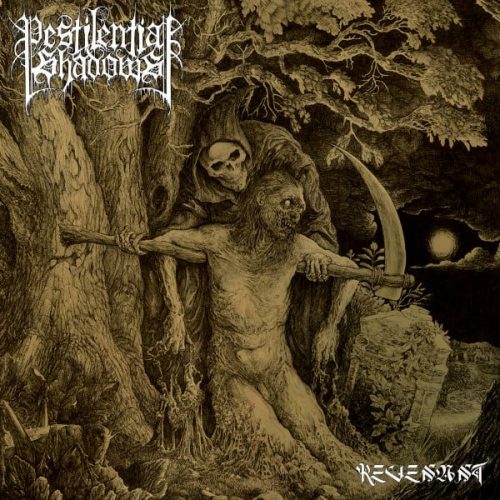 Gotmoor’s song was dramatic, but if anything this next song is even more so. It proceeds like a dire march, bleak yet defiant. The fiery, flickering leads, vibrant bass, and unhinged howls contrast with the grim and grinding riffage and the cold, stalking cadence. The song is segmented by the magical, ancient-sounding glimmer of zither-like melody, and that becomes the prelude to burning ferocity. The beat is still measured, but the music soars in a way that consumes the senses in glorious but dangerous fire. The press materials refer to a “regal-yet-gritty grandeur”, and that certainly rings true when you hear this song.

“Hunter & Reaper” appears on Revenant, the sixth album by these Australians, which will arrive seven long years after their last one. Its set for a September 3 release on multiple formats by Seance Records. 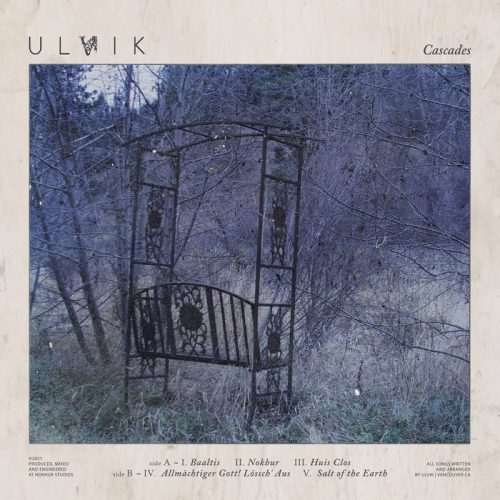 Continuing with the musical theme of powerful drama established by the first two tracks in this collection, I’m moving next to a song named “Baaltis” off the debut album by the British Columbia band Ulvik (the duo of Jade Fadel and George Allen) — but this is a different kind of drama, a portrait that’s both haunting and horrifying.

Shimmering synths and shining strings create a feeling of ghostly mystery. Raw, roiling riffs, throat-shredding roars and screams, and deep, excavating bass frenzies become a flood of derangement. Slowly strummed abrasive chords and moaning low frequencies undergird the reappearance of those high, apparitional sonic mists. The majesty of the music mounts, without lessening the fear it encompasses, and it becomes a haunting phantasm of sound again at the end.

You would know something sinister was afoot in this song even without the video, but the video underscores the feeling. It seems to portray a marriage, but there’s no exchange of rings. The monstrous groom wants the woman’s teeth, as a bloody and disfiguring testament to her devotion and desire.

Ulvik’s upcoming album is entitled Cascades, to be released by Avantgarde Music (CD/LP/Digital) on July 16th. 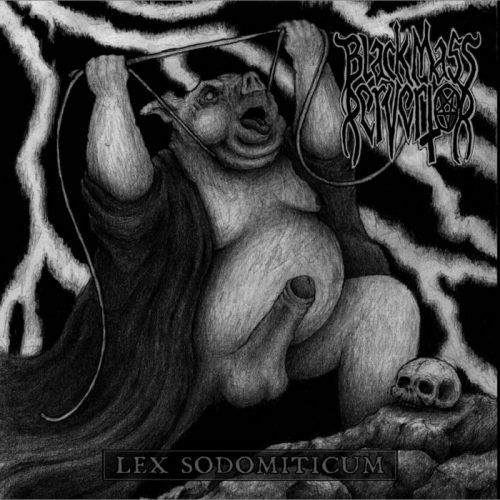 Now I’m taking a big turn in the path of this collection’s music with “Last of the Imperial Cult“, part of a six-song, 16-minute, EP by Black Mass Pervertor. Entitled Lex Sodomiticum, it will be released on July 30th. The song below is as priapic as the cover image. The sound is thrusting and blaring, battering and boisterous, but the feverishness of the riffing and the maniacal nature of the vocals ensures that it’s a deviant and devilish piece of work too.

The song is so short that it’s not much more than a teaser for the EP as a whole, though the EP as a whole will make quick work of you too. I’ve heard the rest of it. Sometimes the music heaves and groans, and sometimes it goes berserk in a thrashing, sneering frenzy. The band are capable of generating sounds of dismal cruelty and primitive oppression, as well as imperious stomping and onslaughts of crazed, blood-lusting mayhem. In the longer songs, they combine several of these sensations within the same temporal framework. And all of it sounds convincingly demonic.

As the band accurately proclaim, this is “black heavy metal shaking hands with old school thrash and punk”. The EP’s themes deal with “man’s persistent urge to conquer, destroy and humiliate, and to gain power, knowledge and spiritual freedom by experimenting in the fields of the occult, and violent morbid sexuality”. 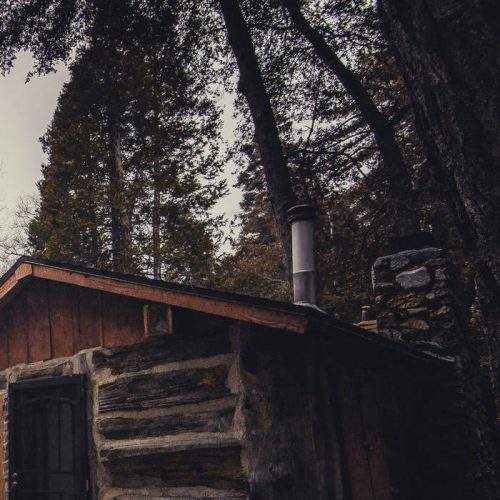 And to conclude Part 1 of this weekend collection, here’s another sharp turn in the path, with a new song by Ramihrdus, the solo project of Wisconsin musician Bryce Witt.

The sounds of “Blackfire Sky” are entrancing, yet heartbreaking, in keeping with the lyrical theme of witnessing “The breathing trees / In the sea of green / Burn to the ground / To feed our machine”, the kind of event we here in the Pacific Northwest (and elsewhere) are doomed to experience again during this parched and overheated summer.

Through beautiful flowing synths and the pinging and ripple of Lustre-like keys, the song weaves a spell, and there’s a feeling of joy in the pulse of the drums. But the strangled snarls and the scratchy gloominess of the riffing give the music a feeling of unmistakable bleakness, which persists even when the drums begin to clatter in a fever and the riffing seems to boil. There might be high, wordless voices in the mix near the end, contributing a sense of reverence when the amalgam of ethereal tones returns.

The song will appear on this project’s third album, The Sorrow of the Evergreens, due for release by Anthrazit Records on August 20th.