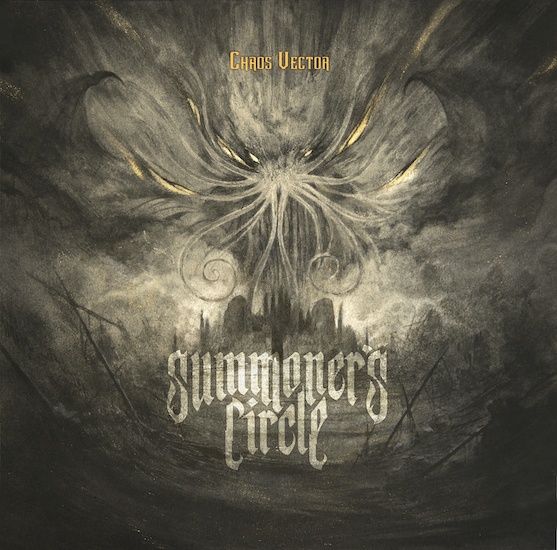 Today it’s our devilish pleasure to help spread the word that on August 27th the Tennessee sextet Summoner’s Circle will release their third album, Chaos Vector. And to draw further attention to that welcome news, we’re also premiering an extravagant music video for the album’s equally extravagant title track.

The song itself is sonic alchemy, not merely because it creates a frightening atmosphere of dark magic being practiced and dangerous forces being unchained, but also because it blends together different sensations and stylistic ingredients from the realms of black, death, and gothic metal to create an experience that’s greater than the mere sum of its parts. 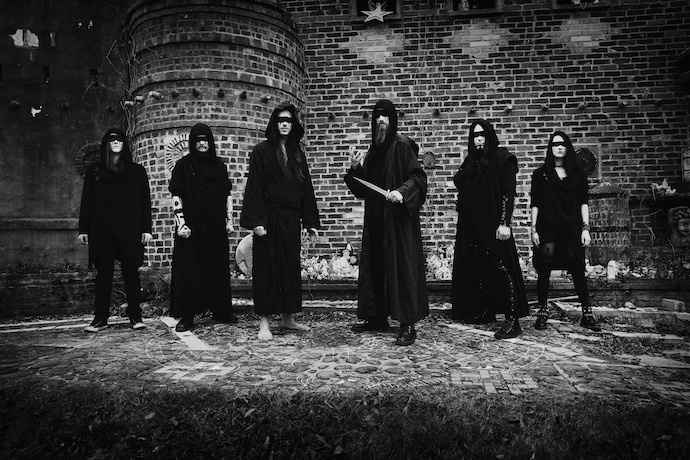 On the one hand, “Chaos Vector” is viscerally jolting, thanks to heavy, throbbing riffs, deep bass undulations, and gunshot drumwork. But as effectively as the music activates your reptile brain and slugs your spine, it also creates overtones of sorcery and infernal menace.

Eerie, shimmering synths lend an aspect of gothic horror; mercurial, fleet-fingered fretwork enhances the aura of the supernatural; and murmuring bass riffs create feelings of sinister allure (and they’ll get stuck in your head too). The vocals, on the third hand, are ferocious (but intelligible), and those serrated-edged snarls, ravenous growls, and feral screams make the song feel even more sinister and perilous.

As if all of that weren’t thrilling enough, the song comes with a professionally executed video that’s a feast for the eyes. No doubt, there were many hands involved in its making, and they all deserve a bow, but principal credit goes to the director Thomas Mortveit.

We’ll also share with you these thoughts by Summoner’s Circle about the approaching album release:

“The last year has been difficult on us all. Many of us lost friends and loved ones, and none of us in the band thought it would last this long or end up this bad. We figured early in 2020, before the pandemic hit, that we would finish the album, get it released, and immediately get back to touring. That didn’t happen.

“Now there is hope for the future, and this amazing album we sat on for over a year is finally being released. We couldn’t be happier with how it turned out – a concept album that was first conceived over two years ago is now here. Our love of story-telling and cosmic horror has given us inspiration for a story that [vocalist] Blind has wanted to tell since our formation in 2015.”We wanted this album to elicit an entire range of emotional reactions in a post-Covid-19 world.

“While this album, in a literal sense, has nothing to do with the pandemic, we are certain that the content will appeal to metal fans and give them what they may need going forward as the post-pandemic clouds part. \This album is the culmination of ever-growing musicianship, new blood, old blood, staying true to our tastes, and growing with new experiences and goals. As we continue this journey with all of you, we can’t wait to share this creative endeavor with fans, both new and old. We have scratched every creative itch with this album, and we hope you find as much enjoyment out of it as we have in creating it.”

The album will be released via Blood Blast Distribution, powered by Nuclear Blast, and it’s recommended for fans of Dimmu Borgir, Behemoth, Immortal, Opeth, and Tribulation. For more release news, watch these spaces:

One Response to “SUMMONER’S CIRCLE: AN ALBUM ANNOUNCEMENT AND TRACK PREMIERE (“CHAOS VECTOR”)”