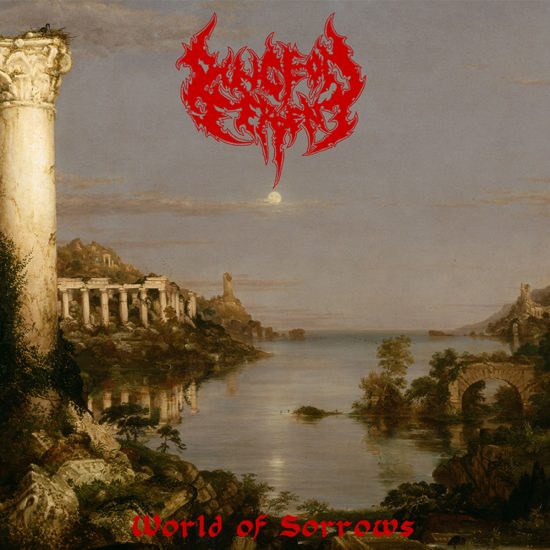 Who doesn’t love a breathtaking surprise? The sight of meteor showers blazing at night, a sudden murmuration of starlings overhead, the penetration of sun rays through heavy clouds… such things create a sense of wonder. Other surprises are more frightening and destructive — earthquakes, flash floods, gunfire going off in crowded gatherings, bombs raining on villages.

Such thoughts have come to mind in listening to World of Sorrows, the debut album of the death metal band Dungeon Serpent from Vancouver, British Columbia. It comes out of left field, preceded only by a two-track 2020 demo (though the demo itself was a very promising surprise). And like those other contrasting surprises mentioned above, it both inspires a sense of wonder and also inflicts breathtaking levels of sonic obliteration. The music is morbid, mauling, and merciless, but also home to both emotionally evocative melodies and the kind of pyrotechnic guitar mastery that drops jaws.

And there’s an especially big surprise at the end.

Little wonder that we leaped at the chance to present a full stream of the album today in advance of its July 16 release by Nameless Grave Records. 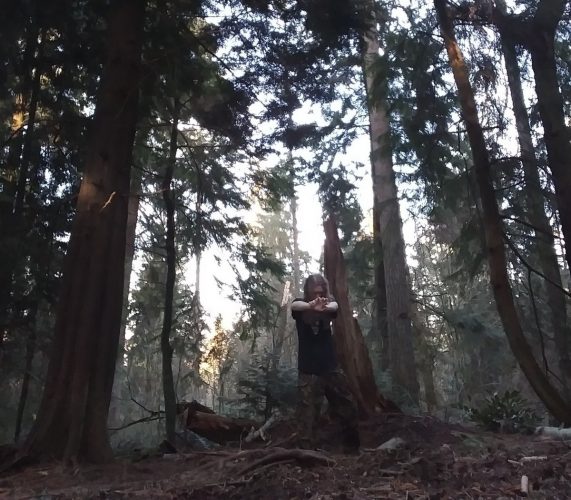 Yes, the album is a stunner, and even more stunning because it’s the work of one person, who goes by the name Arawn. Sometimes musicians confoundingly seem to hear in their songs something no one else hears, but in this case Arawn’s comment about the album will ring true after you hear the music:

“I went into World of Sorrows with a very specific intent. Looking at it even 5 months after I finished songwriting, it surprises me just how precisely I achieved that goal. I wanted an album that was fast, brutal and morbid, yet also introspective and highly melodious. That is exactly what I got. Everything flowed out of me and coalesced into the 5 tracks presented. Indeed, it is a majestic structure that conveys my miseries, my triumphs and my passions with arrogant and excessive splendour.” 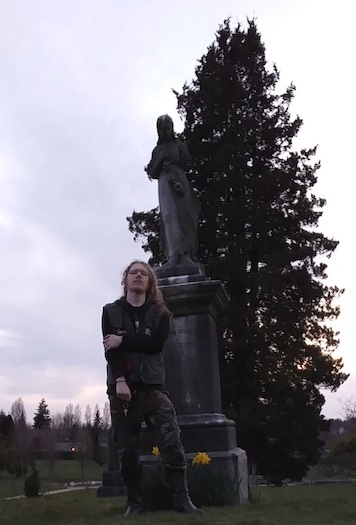 The album consists of five substantial songs, culminating in the 11 1/2 minute track that shares the album’s name. On the subject of brutality, the music brings to bear super-thick, gruesomely distorted guitar and bass ravages, hammering drums, savage barking growls, and rabid cries. The mangling and mauling impact of the riffing is stupendously ruinous, evoking visions of titanic granite-crushing devices gouging through the earth’s mantle at berserker speeds, and the frenzied swirling and darting leads that spear out from that sonic barrage are equally maniacal (and electrifying).

The speed of the barrage really is furious, and the music reaches further heights of crazed ecstasy thanks to soloing that’s feverish, fluid, and fire-bright. But at times the soloing is also beautifully spectral, strikingly hopeless, and soulfully moving. And at other moments, such as some of the phases within “Cosmic Sorcery” and the title track, the music also becomes brazenly majestic.

Dungeon Serpent does occasionally pull back on the hell-for-leather attack, to make room for the infliction of crushing stomps, to exhale miasmas of abysmal gloom and pestilential peril, and to lower the mood into troughs of grief and despair. There are also digressions from the usually turbocharged momentum that are genuinely surprising, and surprisingly welcome, such as the glistening ethereal tones that conclude “Decay”, the mesmerizing, banjo-like arpeggios that surface above the jolting grandeur of the afore-mention “Cosmic Sorcery”, and the combination of bright, dancing keys and seductive classical strings that end that same song.

The blazing fretwork is multi-layered and technically very impressive, but always deployed as tools in the service of a paramount mission — to create overpowering sensations of unchained chaos, anguished delirium, or frightening ebullience. Yet it probably can’t be overemphasized that the songwriting pays equal attention to emotionally evocative melody, which gives the rampant barbarity a dimension that’s often lacking in other bands’ displays of such extreme metallic slaughter.

As alluded to at the outset of this write-up, the very long closing track is worth special attention, in part because it’s such a wide-ranging departure from much of what precedes it (though hints of its achievements are definitely to be found in the earlier songs). First and foremost, “World of Sorrows” is entirely instrumental, and it’s a true guitar tour de force. Dungeon Serpent dials back the brutality and draws on influences that seem to reveal an affinity for power metal and “classic heavy metal”. There’s often a “sword and sorcery” atmosphere to the music, and it’s home to some fantastic dual-guitar harmonies — including beguiling acoustic-guitar duets with a medieval resonance — as well as extended solos that are absolutely enthralling. But of course, it will also kick your adrenaline into overdrive with ravishing displays of nimble fretwork and battering percussion.

MORE DETAILS: World Of Sorrows was written by Arawn, who performed guitars, vocals, and bass, and programming. It was recorded at 6085 Productions by producer J. Hook (who provided additional programming), mixed by Andrew Lee, and mastered by Dan Lowndes at Resonance Sound Studios. The record features interior Illustrations by M. Lin, photography/graphics by Arawn, layout by Arawn and Brandon Corsair, and Thomas Cole’s “The Course Of Empire: Desolation” as the main cover.

Nameless Grave is releasing the album on CD and digitally, and a vinyl pressing will follow late in the year. 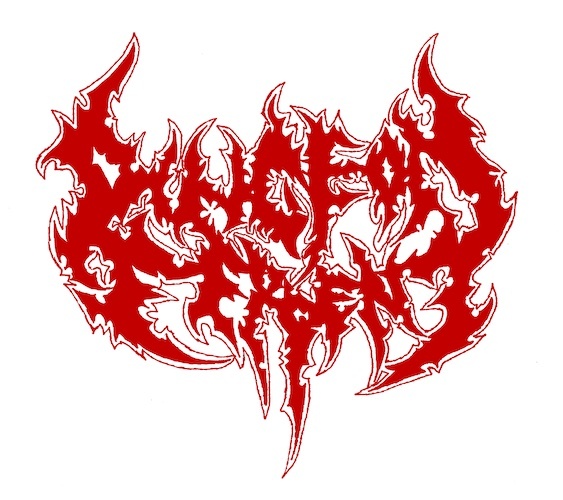 One Response to “AN NCS ALBUM PREMIERE (AND A REVIEW): DUNGEON SERPENT — “WORLD OF SORROWS””