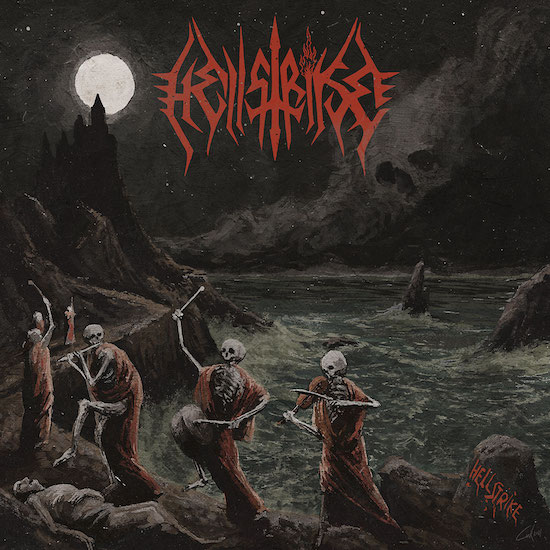 The allure of some metal releases begins and intensifies even before you hear a single note. Sometimes that allure is even more intense when you don’t have a previous musical repertoire from the band that would more concretely tell you what to expect, which is the case with Hell Strike‘s debut EP Hellstrike.

In the case of this writer, the allure and the intrigue were first kindled by the pedigree of Hell Strike‘s line-up, which features members of Ascended Dead, Ritual Necromancy, and Bloodsoaked. And then it intensified upon seeing the EP’s cover art by Misanthropic Art (which turns out to be an effective visual rendering of the diabolical atmosphere of the sounds). And then the allure became greater still upon seeing comparative references in the press materials to the likes of Sadistic Intent, Grotesque (Sweden), The Chasm, Necrophobic, Mortem (Peru), and Order From Chaos.

Sometimes after becoming intensely enticed in such ways, we’re left downcast and disappointed after listening to the music. But as you’ve no doubt already guessed from our hosting of the EP’s full streaming premiere a couple days before its release, all the excited expectations were not merely fulfilled, but exceeded. 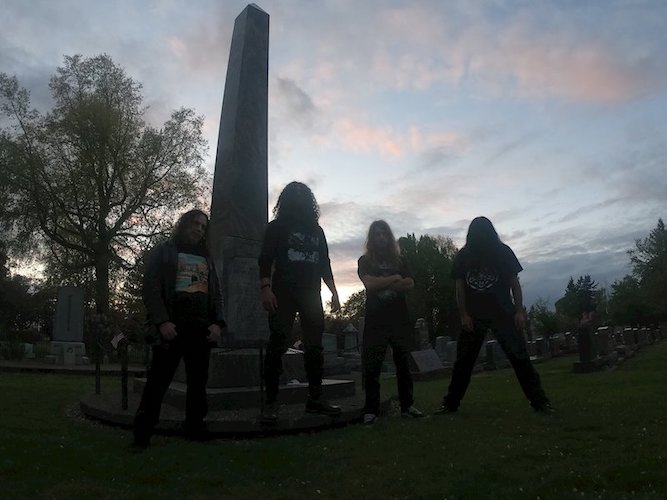 This Seattle/Portland band’s creations derive from a masterful amalgam of death and black metal that evokes old remembrances. But the music is so devilishly vivid, the songwriting so multi-faceted and mature, and the execution so adept, that the EP goes far beyond a mere nostalgia trip. Moreover, it’s the kind of release that tells you the band knew exactly what they wanted to achieve, and beautifully coalesced around that objective.

And what they’ve achieved is music that really is diabolical, dangerous, and macabre in its atmosphere, generating sensations of dread and derangement, of misery and mayhem, spawned by the imagination of the frighteningly supernatural. As the cover art suggests, Hell Strike share their revels in the kingdom of death. 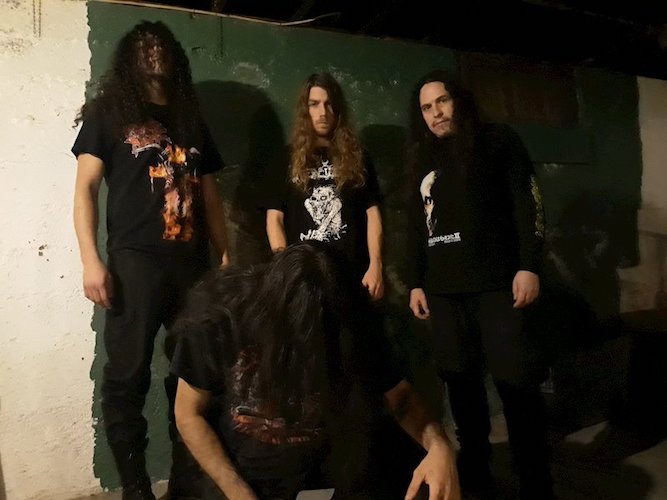 In such songs as “Cadaveric Requiem” and “Re-Abortion“, the fleet-fingered guitar work generates skittering, darting, and seething sensations over hammering drums and rapidly pulsating bass tones, accompanied by the vocalists’ maddened, throat-cutting snarls and vampyric howls. There’s a palpable sense of madness and cruelty in the music, and when the chords blare and jolt, and the drums rumble and stomp, a feeling of ominous, sinister menace courses through the sounds.

“Chains of Frost” is no less menacing but elevates the danger to heights of alarming grandeur, and slow, whining chords add moods of abysmal misery, while a slithering, swirling guitar solo sounds like a vector of disease. The song also slashes and burns in surges of unhinged barbarity, with all performers going flat-out and the vocalist venting absolutely vicious rage.

Although manifestations of misery surfaced in “Chains“, they become dominant in the opening of “First Born of Fire” — before the riffing ignites in a scathing frenzy. As you listen, by now it will be undeniable that Hell Strike are capable of unleashing hellish paroxysms, and intertwining those with moments of oppression and hopelessness, and “First Born…” is a prime example. The rapidly vibrating dual-guitar harmonies and magma-like bass gurgles succeed in painting portraits of delirium, whose impact is exhilarating as well as scary.

Hell Strike are also capable of mounting punishing juggernaut assaults, and “Morbid Abnormality of the Ages” is an example of that, though the dynamism of the songwriting comes through again as the band continually shift gears, again creating passages of towering, brazen, blood-freezing grandeur and spasms of blood-lusting lunacy.

The band end the EP with an instrumental piece that reveals some further dimensions of their talents. The overture of “Transylvanian Funeral” becomes an enthralling rendition of melancholy and anguish — and then, surprisingly, a clean guitar duet rings like chimes, still sorrowful but also mysterious and mesmerizing. The rhythm section are subdued in this final track, but the harmonized riffing becomes more hectic and harrowing, picking up that gripping opening melody and driving it even more intensely into the mind. It’s a haunting way to close things out.

Hellstrike will be released by Chaos Records on July 16th, on CD, cassette tape, and digital formats. You can (and should) pre-order now: