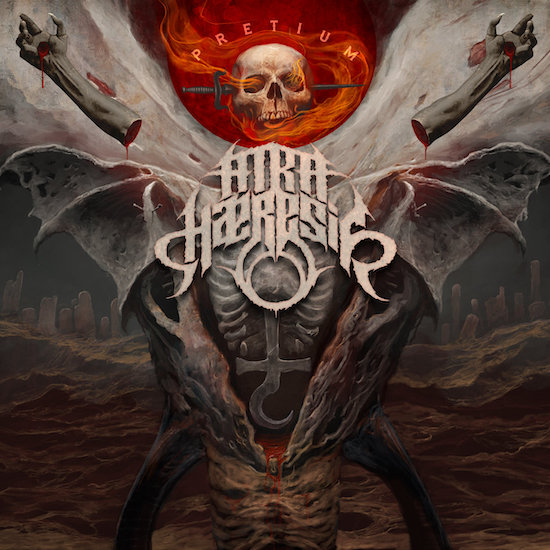 The song we’re about to premiere through a lyric video is one of those which we sometimes accompany with a warning — that you’d better take some big gulps of air before diving in, because it’s so exhilarating on so many levels that you’ll need the extra oxygen. And on top of that we should add the warning to loosen up your neck muscles, because its powerfully hammering grooves will trigger the good old headbang reflex in extravagant fashion.

The song we’re talking about, “Pretium?“, is a powerhouse track from the debut album by Atra Haeresis, an international black/death band that features members from such other projects as Ethir Anduin, Obscuration, and Навьяра, along with mastermind Alexander Dorokhin and a trio of guest performers. The album, named Pretium, is set for a joint release on August 26th by Satanath Records, Kryrart Records, and Death Portal Studio, and a tape edition will also be available through Void Wanderer Productions.

In this new song, whose bleak philosophical lyrics are featured in the video, Atra Haeresis immediately set the hook hard with a big, jolting, neck-bending riff augmented by percussive spasms that foreshadow the brutal battering and crazed riffing to come. The lead guitar spears outward in gloriously feverish fashion, sending the music sky-high (even as it simultaneously pounds like a pile-driver), just as the vocals convert from bestial growls into intense, sky-bound wails.

The guitars seem to scream, bridging a line between electrifying ecstasy and nerve-shredding fear, propelled by vivid bass tones and drums that blister and clobber in ruthless fashion. The song becomes a tornado of fire, but in the midst of that fantastical maelstrom the band still give your neck no chance to relax — the highly headbangable grooves are too compelling for that.

But a brief reprieve of sorts does eventually arrive. The drums ebb, the bass more prominently surfaces, and the dissonance of the guitars creates a feeling of eeriness — a feeling that intensifies as the drums mount a new surge and a weird and wailing guitar solo rises. And then the song hammers and harrows again, reaching a truly breathtaking crescendo of instrumental explosiveness.

The album’s fantastic cover art, which plays a prominent role in the video, was created by Vladimir “Smerdulak” Chebakov. It will be released on pit-art CD in a jewel-case edition with an 8-page booklet, limited to 500 copies, as well as digitally.

Pre-order links are below, along with a stream of the previously released song “Vaunted Dyer“, which is a free download at Satanath’s Bandcamp.