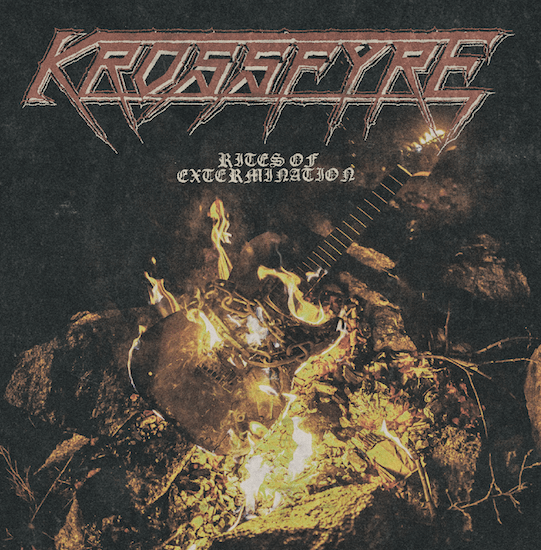 What we have for you today is the complete premiere stream of one of the most exhilarating and explosive albums of the year so far. Anyone who’s heard this Barcelona band’s 2017 debut EP Burning Torches won’t be shocked to hear that, but even devoted fans of that EP are going to have their eyes opened wider and their jaws dropped lower by what Krossfyre have achieved on the rip-roaring Rites of Extermination.

Once again, the band have stewed together a host of metal styles in a boiling cauldron, with black metal, thrash, and death metal being the most prominent. Benefitting from a more clear and cutting production, the music creates blowtorch heat and black powder explosiveness, whirling-dervish wildness and feral savagery, hellish grandeur and dire melancholy — and all of these experiences, save perhaps the last of them, simultaneously radiate an atmosphere of unchained devilry, of a coven of witches and warlocks spinning and levitating in the throes of diabolical possession. 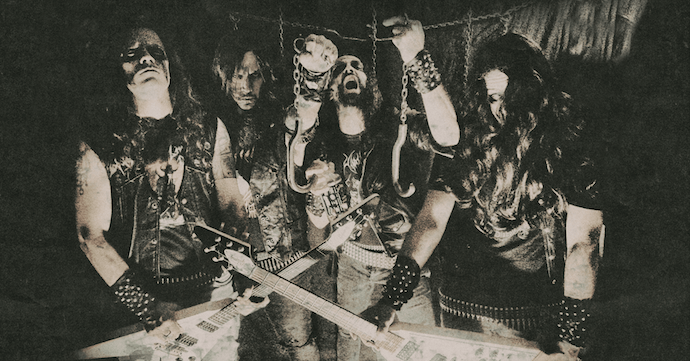 Krossfyre begin the album in breathtaking fashion with “Rivers of Fire”. The drums thunder beneath a wall of searing guitars. The riffing roils and ravages as the backdrop to crazed, howling proclamations. Explosive detonations and bouts of percussive bullet-spitting accent the mayhem. There are also stomping cadences and cruel, dismal vibrations that bespeak a horrid grandeur unveiled, as well as bursts of blaring chords, swirling, witchy melodies, and eruptions of maniacal and majestic soloing.

The atmosphere of unhinged black magic revelry continues throughout the rest of the album. The band deliver constantly shifting rhythms; shrill, mind-piercing riffs and freakishly flickering leads; surges of brazen melody and bunker-busting booms; delirious soloing and vocals that sound so utterly vicious and imperiously mad they almost make the instrumental mayhem seem modest. The repetition of certain lyrics, sometimes with the vocals doubled for extra impact, makes you want to scream along. The ingenious use of channel shifting and channel separation in the scintillating guitar leads and soloing make them even more exciting.

There are precious few moments when the band relent in their exultant, berserker ravages — the gloomy conjoined tolling of bells and guitars at the outset of “Law of the Jackals”, the sorcerous but anguished melodies in “Deadly Bites” and “Spit-Bullet”, the atmosphere of grim and gloomy eminence those same two songs generate in the midst of the usual lunacy, and the nightmarish ambient sequence that ends the album at the finale of the closing track. For the rest of the time, hold on for dear life.

It’s very difficult to pick out specific “do not miss!” moments in the album because there are SO MANY OF THEM, but the glorious, trilling guitar extravagance at the outset of “Casus Belli” is one, the extended soloing in “Spit-Bullet” (which is heart-piercing and anthemic) is another, and the guitar work throughout “W.L. (Burn Like Fire)” is especially over the top.

In short, Rites of Extermination is viscerally stunning and a huge adrenaline rush. And as if that weren’t enough, the songs are also highly cathartic and highly infectious.They’re effective antidotes for depressive moods and listening to them is a decent substitute for actually going out to kill and maim on your own and less likely to land you in prison.

Rites of Extermination will be released by Hells Headbangers on July 23rd on CD, and a vinyl LP edition will follow later.