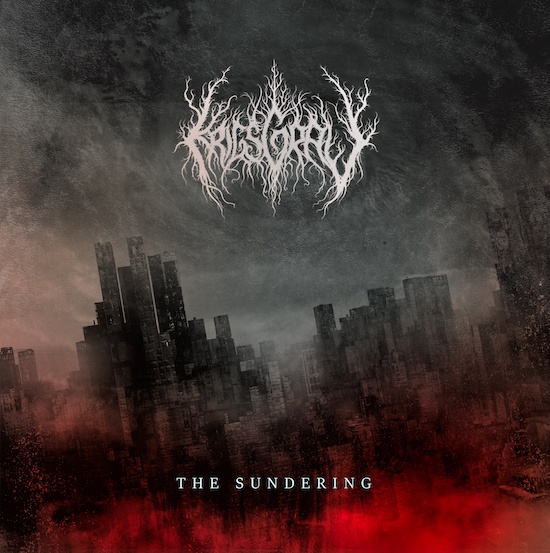 One of our favorite bands, Krigsgrav, will be returning on August 6th with a new album named The Sundering, to be released through Wise Blood Records. This is their sixth full-length since 2004 and features a revised line-up that now includes not only David Sikora (drums, bass, backing clean vocals) and Justin Coleman (vocals, rhythm guitars, ambient noise), but also new lead guitarist Cody Daniels, whose name will be familiar to many of us as a member of Giant of the Mountain.

If there is a spiritual center to Krigsgrav’s amalgamation of black metal and melodic death/gloom, it is the portrayal of bleakness. In Justin Coleman‘s words, “Krigsgrav is based around beauty in darkness, our stoic internal reflection and just the smallest amount of hope that can still be found, even at life’s darkest moments.” He further explains that The Sundering in particular “is based around the dread of a natural event occurring and having no control, but trying to find the means to pull yourself together to get through it all. It is about personal perseverance in the face of absolute crushing odds that should not allow it. Our lyrical content is almost consistently about our place in this world, and how finite and fragile our existence is.”

One concrete source of this thematic focus was the devastating hurricane that decimated the then-thriving island city of Galveston in Krigsgrav’s home state of Texas in 1900 — a stunning assault of nature than left 8,000 dead in its wake. If only that were a never-to-be-repeated event, but as we all know, extreme weather events have become relentlessly more common and are likely to be an ever-present part of our experience for a long time to come. 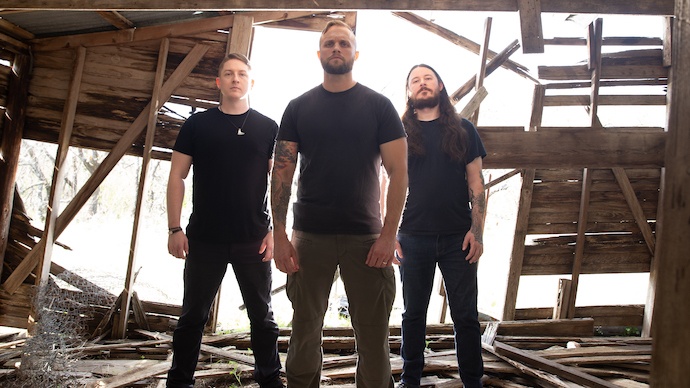 With these thoughts in mind, we turn to the track from The Summoning that we’re premiering today — and we’ll again turn to Justin Coleman for some insights about the song:

“‘Dread the Night‘ is lyrically about finding inner peace among the chaos, being comfortable among the darkness. I think it’s human nature to be drawn to the darker side of life/things and this is just accepting that it is in our nature and accepting that and not trying to fight it. Musically it is outside the norm of our previous material. The intention when writing this track was to have no limitation for what can be included in a single song riff/structure wise, which is why the riffs are inspired by The Cure, At the Gates and Blut Aus Nord“.

Without pause the song surges, unleashing a storm of undulating bass, roiling riffage, steady, skull-slugging drums, and savage growls. It’s an immediately gripping and intense way to start, but the intensity builds as the drumming becomes even more hard-charging, the guitars more frenzied, and the vocals more harrowing as they erupt in screams. There’s a sense of anguished, all-encompassing delirium in those sounds, and a feverish, fret-melting solo pushes it even further into the red zone.

Darting and jolting chords provide a brief digression, leading into a renewal of the ripping and ravaging guitar storm and the punishing upheavals in the low end, segmented by moments of oppressive gloom as well as a feeling of unyielding fight and defiance. The song is an incredibly gripping experience, and one that gets the heart pounding hard.

There are other eclectic dimensions to The Sundering than what you will take away from “Dread the Night”. To borrow words from the PR materials, the album “considers black metal a canvas instead of a genre prison”. “Krigsgrav channel the rustic atmospheres of Agalloch and Woods of Ypres while the somber moods of Katatonia and My Dying Bride seep into each composition. But the album also brings a storm of riffs with its dark-cloud ambience. Think the Swedish greats like Dissection and Dawn playing as cataclysmic winds come with nightfall”.

Wise Blood Records will release the album on CD, Cassette, and digital formats on August 6th — and fans of the bands mentioned above, as well as Krigsgrav of course, would do well to pick it up.

No Responses to “AN NCS PREMIERE: KRIGSGRAV — “DREAD THE NIGHT””