I’m taking a chance calling this Part 1, since Part 2 exists only in my head at this point. But we need goals, right?

At least Part 1 is complete. What I chose for it is a collection of four singles from forthcoming releases and one complete album that just surfaced today. A couple of these aren’t black metal, strictly speaking, but I got so excited about them that I didn’t want to wait, and at least from my perspective they don’t seem out of place. My goal for Part 2 is a few more complete recent releases.

Erstwhile NCS contributor KevinP has been banging the drum among friends for this first song, and the song is a banger too. The big rumbling riff that opens the track is an immediate head-snagger, and the song just gets more addictive as the riffing becomes increasingly feverish. Embellished by a nasty tone, the guitars viciously roil, jab, and jolt, backed by viscerally compelling drumwork and bestial bellows and barks. It’s an adrenaline-fueling mix of skull-slugging grooves and boiling chaos….

ΣΧΕΔΟΝ ΝΕΚΡΟΣ seems to include the man behind Agos and Virus of Koch. For further background, here’s the band’s statement on Bandcamp: “Shedon Necros (Almost Dead in greek) is a death metal/hardcore band formed in Athens in March 2021. Their members have been active in the local black metal and hardcore punk scene in various periods since 1997. The lyrical subject is in Greek and presents a critical view on religious intervention and political oppression against personal freedom. Their debut album will be released in early 2022.” 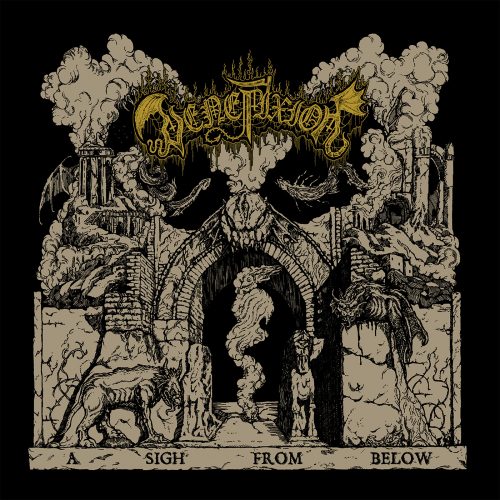 Like the opening song in this collection, “Of Wolves and Goats” launches with a gripping opening riff, though it’s much more deranged, and the hammering drumwork is a big hook all its own. The malignant vocals are as ravaging as the thrashing chords and berserker leads, but the song is a varied one, and features moments of brazen and bombastic grandeur as well as a shrieking solo that drives it to a zenith, plus eerie wailing voices, big tumbling drums, and chilling spoken words.

The song is from Venefixion’s debut album A Sigh From Below, with an October 1 release date from Iron Bonehead Productions. 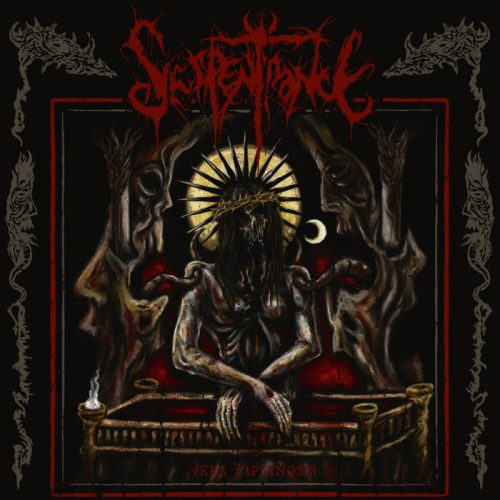 I had a big surprise awaiting me this morning as I was finishing up this column. I had already decided to write about the one song (“Vomit & Myrrh“) that was streaming on the Bandcamp page for the new Serpentrance album, Akra Tapeinosis, but upon revisiting that page today I discovered that the whole album had been made available for streaming even though it’s not technically due for release until tomorrow. But let’s begin anyway with “Vomit & Myrrh“.

This is possibly the most evil and apocalyptic song in today’s collection. Extravagant choral voices provide the hallowed overture, and then it becomes a malicious maelstrom of scything riffage, pummeling drums, and ravenous growls and howls. When the drum rhythm becomes more measured, the song drenches the listener in a miasma of dense, oppressive, distorted chords. The music heaves and stomps, but still punctuated with bursts of percussive mania and crazed fretwork, still accompanied by those voracious, possessed vocals.

The shrill, squirming and shrieking, leads enhance the song’s frighteningly otherworldly and utterly hopeless atmosphere. The drumwork pops your pulse, but the music proceeds as a soul-devouring dirge — right up until the paroxysm of rabid, scourging violence that ends the track.

Having only made my way through the rest of the album once, and being pressed for time, I’ll add only a brief preview of what else lies ahead: A gauntlet of morbid and maddened sound is what lies ahead. These long songs of doom-stricken black/death are heavy as hell, dismal and poisonous, creepy and necrotic, demonic and demented, and they drop bunker-busting bombs as well. The gruesomely distorted riffs sound like massive circle saws chewing through granite or the convulsive spasms of a leviathan; the pop of the snare is relentlessly compulsive; the leads ooze misery and flare in spurts of derangement; and through it all the vocals are terrorizing.

“Hope” and “mercy” aren’t in this band’s musical vocabulary, but they do know how to send electric shocks down the spine as they consume your quivering soul. 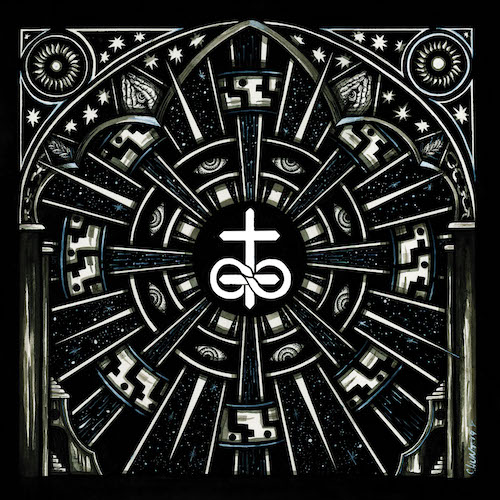 IN THE COMPANY OF SERPENTS (U.S.)

Prepare to indulge in a slow headbang, moving to the gut-slugging beats and the thick, woozy, hook-laden riffs. “Scales of Maat” a trance-inducing and body-shaking experience, but you can also feel a big serpent in the sounds, coiling itself around your thorax, and squeezing. The pace begins to drag and the music becomes more menacing, thanks to horrid howls and riffing that’s both slow and blood-congealing and frighteningly feverish. The rhythm section continues to hit with bludgeoning, bowel-loosening force as the music marinates your mind in nightmares.

The name of the album is Lux. It will be released on September 3rd by Petrichor. 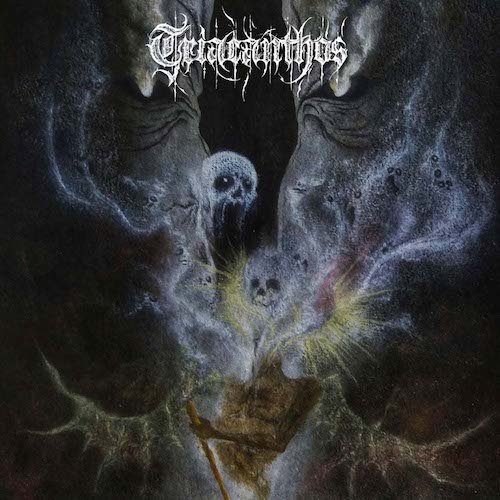 After that last grim and gruesome escapade I decided to finish the collection with a track that (at least at the beginning) is more ebullient, albeit one that’s also feral and freakish in its ecstasy. The rhythms scamper and bound; the guitars whir and whip; the vocals sound like a wolverine being strangled, though sometimes coupled with cold roars.

But the song turns out to be quite multi-faceted. It slows and becomes depressive; there are ringing and rippling guitar instrumentals that are entrancing; and when the drums start galloping, the tremolo’d melody seems to channel yearning and fiery anguish.

This track is off a debut album named Apotheosis, which is set for release on September 25th by Purity Through Fire. In case you’re curious, I’ve read that the name this Texas band chose for themselves is “the Latin species name for the honey locust tree, bearing the thorns used for the crown of Christ”.