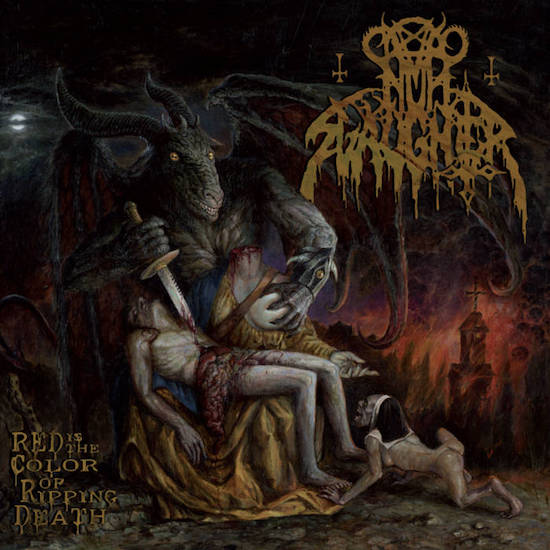 The perfectly named Red is the Color of Ripping Death is the first Nunslaughter album in seven years and the first one since the 2015 death of the band’s beloved drummer Jim “Sadist” Konya. For those who knew him, it is clear that he will always be missed, but he would no doubt be smiling along with the rest of us to know that Nunslaughter have forged ahead in such savage and fiendishly seductive fashion.

What we’ve got for you today is the premiere of an album track named “Broken and Alone“, accompanied by a music video that pairs scenes of a serial-killer at work with footage (red-tinged of course) of the band discharging the song like wild animals in the throes of ferocious ecstasy. 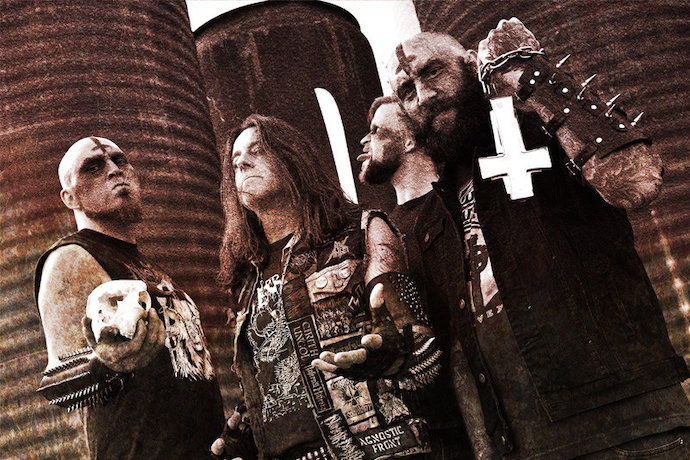 Nunslaughter don’t waste time, and it’s amazing how fast they can punch a listener’s accelerator when they open up their own turbochargers. This new song is roughly two minutes of battering drums, hard-thrusting bass, roiling and raking riffage, and teeth-bared, coming-for-your throat vocal ferocity, with a bludgeoning and brazen breakdown to keep you on your toes in the midst of all the blood-spraying devil-metal mayhem.

In case you missed it, down below we’re also including the fantastic Claymation-style animated video for the first single from the new album, “Below the Cloven Hoof“, which also wastes no time bringing your blood to a boil and making mincemeat of your brain.

Red is the Color of Ripping Death includes the completion of some unfinished / unrealized music that Jim Sadist and founding frontman Don of the Dead wrote years ago, as well as material newly written with Nunslaughter‘s current lineup.

The album will be released by Hells Headbangers on CD, tape, and digital formats on August 27th, with an LP projected to surface in the winter of this year.

7 Responses to “AN NCS VIDEO PREMIERE: NUNSLAUGHTER — “BROKEN AND ALONE””