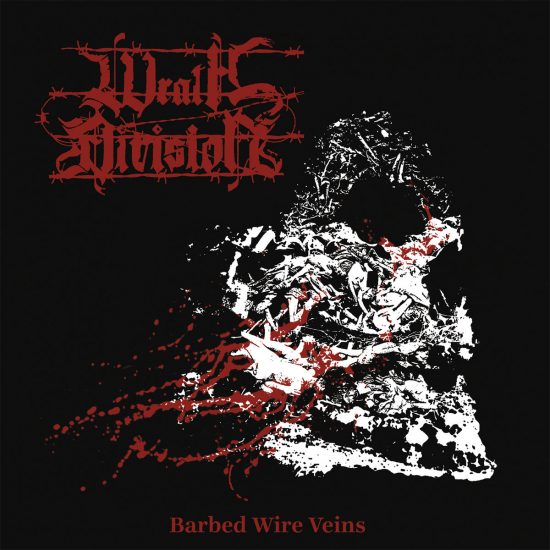 The three members of the Polish war metal band Wrath Division identify themselves by latitude and longitude coordinates rather than names. Finding nothing about the significance of these coordinates in the promotional materials for the band’s debut album, Barbed Wire Veins, we resorted to Google maps, and made these chilling discoveries:

And if those examples of humanity’s capacity for self-destruction aren’t grim enough for you, wait ’til you hear the album.

You won’t have to wait long, because we have a stream of all 10 tracks today, just days away from its August 21 release by Godz Ov War Productions and Left Hand Sounds. 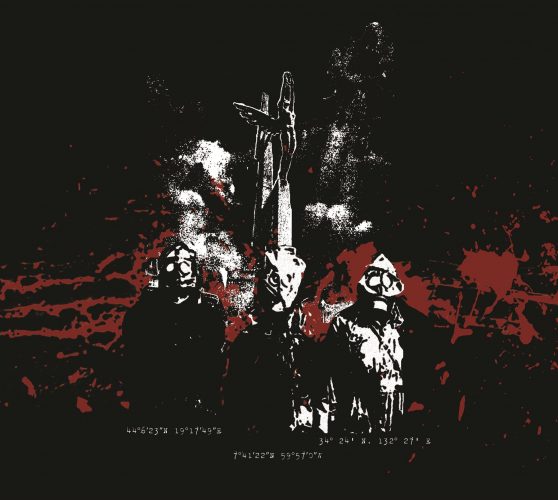 From the blistering and battering title track, which follows an unnerving intro piece, straight through to the penultimate track “Mediumic Reconnaissance Before The Final Strike”, the band inflict rampant sonic slaughter. Brazen, blazing, and gut-gouging riffs made toxic with distortion cut across hammering and booming drums as wild howls and grotesquely distorted snarls and growls vent pure mutilating fury. Crazed soloing goes off like flamethrowers that have achieved sentience and then lost their minds, spurting and squirming at maniacally high speeds and simultaneously injecting adrenaline straight into your neck.

With regularity, the band switch the tempos. The furiously marauding pace dissipates and the band stomp and crawl, emitting doomed, dismal, and dissonant chords, creating moods of suffocating oppression, pounding like sledgehammers and digging mass graves that they will then fill with the corpses they are about to make. When the drumming spits bullets and detonates bombs at a high rate of discharge, the music sounds dictatorial in its cruelty, admitting no mercy — or it simply explodes in paroxysms of chaotic violence. The pick squeals scream like torture victims, the riffs slash like massed blades and swarm in depraved, blood-lusting frenzies. 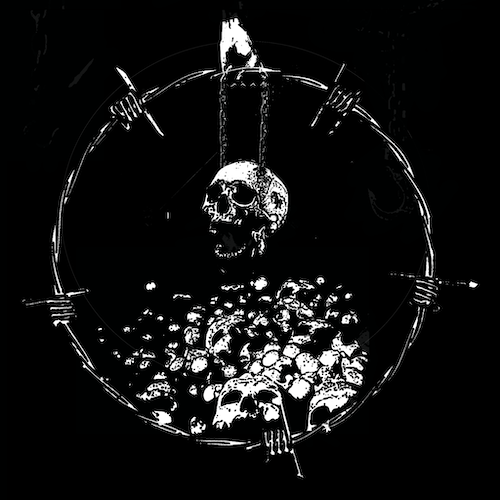 The piston-driven snare and booming tom progressions, coupled with the rhythmic slash-and-burn and crushing sledgehammer blows of the guitars and bass, create mangling grooves, which of course make connections with our reflexes, and the emotional resonance of the music changes (from feelings of horror and fear to cold cruelty and utter hopelessness). Those qualities distinguish the music from some types of war metal that are just ceaseless frothing miasmas of abrasion and relentless blasts.

But make no mistake, despite the presence of these savage hooks, the music is unrelenting in its mind-mauling, soul-sucking viciousness, and the vocals are ceaselessly insane. Even at the end, when “Hexagon” inflicts a cacophony of ear-mauling ambient sounds, there’s no reprieve. If war metal isn’t your thing, this album won’t be either. If it is, you’re in for a thrill-ride, because Barbed Wire Veins puts Wrath Division at the vanguard of a frighteningly destructive movement.

If you need a further introduction to what you’re about to hear, there’s this from the labels who are releasing the album: “Wrath Division pays tribute to Revenge, Archgoat and Black Witchery. No more, no less.”

Godz Ov War Productions will release the album on vinyl LP and digitally, and Left Hand Sounds will release it on CD. The release date is August 21st.

The album was recorded, mixed and mastered at Antisound Studio, and the artwork is by MPN-82