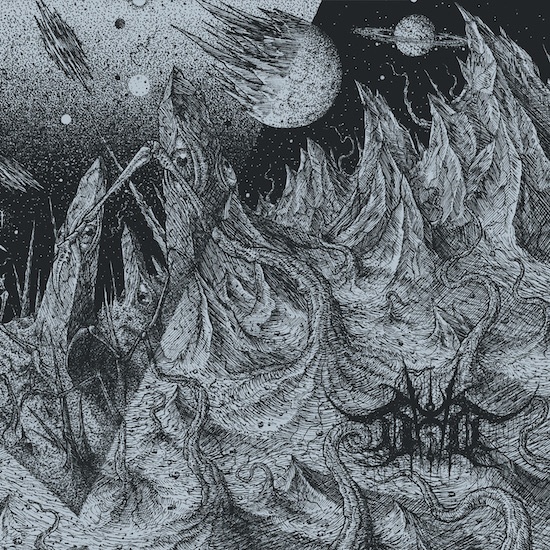 With the kind of genius planning and execution that built the Tacoma Narrows Bridge, the “Iron Dam” in Zhumadian, China, and the tower in Pisa that subsequently leaned, we published our review of Devoid of Thought‘s new album yesterday, 24 hours before premiering a complete album stream today.

But truth be told, this isn’t necessarily a bad thing. A multiplicity of writings, even so closely juxtaposed, may catch more eyes and ears — and this album definitely deserves more eyes and ears. As yesterday’s reviewer Mr. Synn proclaimed:

“Outer World Graves is definitely a big step up from the band’s previous material, dealing in a blend of slithering muscle and otherworldly menace reminiscent of bands like Blood Incantation, Mithras, and Zealotry… a sort of ‘post-Demilich, post-Deeds of Flesh‘ approach that marries punchy, predatory riffs, gruesome, gut-churning grooves, and tormented technicality to an eerie, unsettling atmosphere of proto-cosmic dread”. 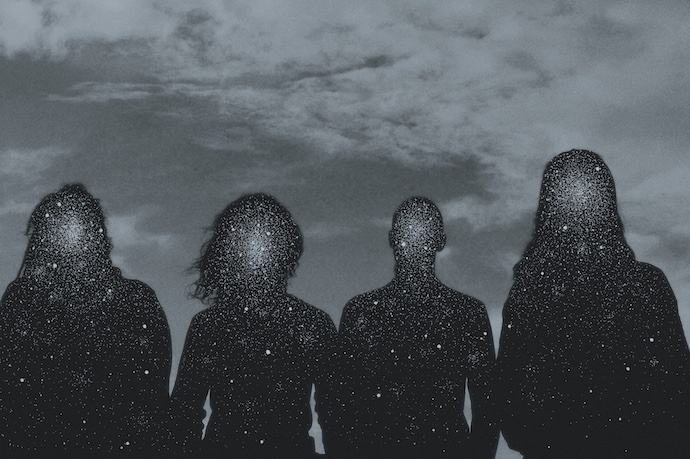 The band’s preceding pair of demos and trio of splits were nothing to sneeze at, but this new album is indeed a big step up, witness the fact that it’s being co-released (this coming Friday) by such connoisseurs of metallic extremity as Everlasting Spew Records and Caligari Records. And if that weren’t enough temptation, the album’s fantastic cover art by View From the Coffin provides more.

Not for naught is Devoid of Thought‘s music branded “cosmic death metal”, and there’s also value in the comparative references Andy Synn mentioned in his review, to which one might add Timeghoul, Voivod, and Incantation. The sounds are twisted and ferociously head-spinning but also chilling, creepy, and dangerous. As you spin yourself into the sonic vortices they create, it’s indeed easy to become devoid of thought, wholly consumed by the experience.

Riffing again on the band’s name, Andy wrote that the album is “a serious and unequivocal statement of intent from a band whose music is clearly not devoid of thought… in fact, I’d go so far as to say that the obvious (and ominous) intellect behind this album means that it’s actually one which rewards careful contemplation and deep deliberation with a subtly mind-altering experience that grows and mutates with every listen.”

And thus we’re damned happy to present a full stream of Outer World Graves today. On August 27 Everlasting Spew will release it on CD (and eventually on vinyl), and Caligari will provide a tape release. Both labels are offering it digitally as well. Pre-orders can be placed now:

One Response to “AN NCS ALBUM PREMIERE: DEVOID OF THOUGHT — “OUTER WORLD GRAVES””