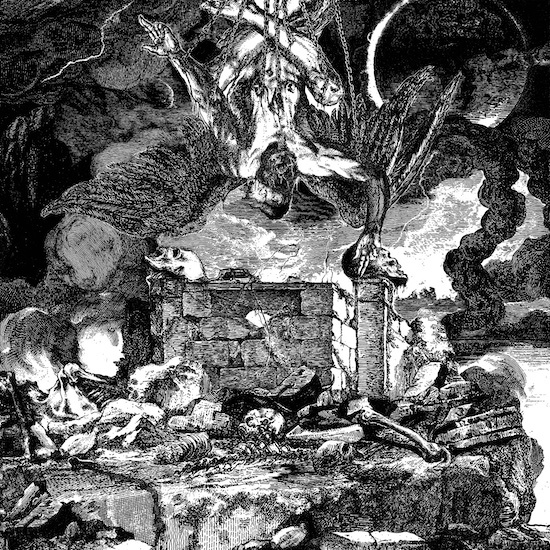 Shrouded in underground mystery, the Canadian black/death band Azothyst are at last prepared to reveal their first diabolical recordings to a largely unsuspecting public that will either cower in fear or become exultant in the throes of such madness: Their debut album Blood of Dead God will be released on October 1st by a coalition of labels led by Vault of Dried Bones.

As the first sign of the tumultuous yet perversely mesmerizing terrors within the album, today we present its opening track, “Rites of Ascendancy“.

In this stupefying first strike a blend of blasting snare and booming toms provide the crazed and decimating rhythms which furnish the turbulent underpinnings for wild, writhing riffage, which squirms and screams in spasms of dissonant, unhinged pandemonium. The ruthless vocals are no less unhinged, vehemently venting the lyrics in cold, cruel growls and maniacal screams. In combination, all these ruinous sensations, which reverberate as if violently expelled from abyssal depths, create a cataclysm of unbridled frenzy and ferocity.

There are moments when this violent typhoon diminishes in intensity, and in those moments the music becomes a manifestation of abysmal hopelessness and despair, only to explode again in breathtaking percussive assaults and riffing seizures that swarm, dart, and wail, creating a hellish and harrowing sonic vortex that wholly consumes the senses.

The song’s electrifying assault creates a visceral impact, yet as forecast above, there is something about it that’s capable of inducing a fugue state, of casting a horrifically surreal spell.

Blood of Dead God‘s cover illustration was rendered by Artem Grigoryev. Logo, sigils and booklet illustrations were made by Krag, with painting and borders by Abomination Hammer. The album was mixed by P.M. and Damian Herring, and was mastered by Damian Herring at Subterranean Watchtower Studios.

The record will receive a lavish physical release, with Vault of Dried Bones selling vinyl and CD editions, Serpents Head Reprisal and Vault of Dried Bones presenting it on cassette tape, and vinyl LP variants coming from other labels (to be announced) in Europe, South America, and the U.S. For more info, keep an eye on the links below.

One Response to “AN NCS PREMIERE: AZOTHYST — “RITES OF ASCENDANCY””