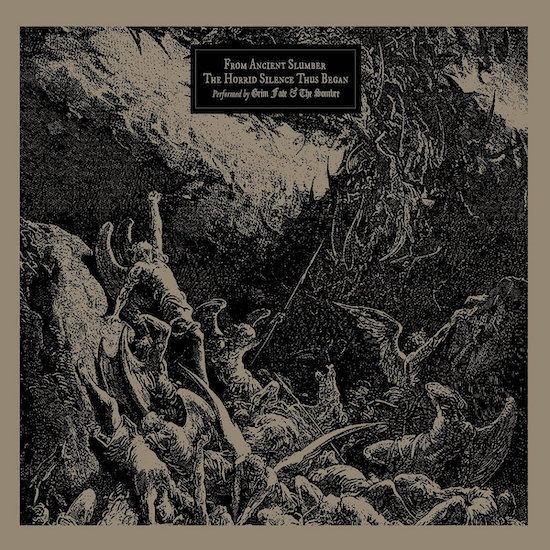 As amalgams of death and doom metal go, we’ll be so bold as to say that you won’t find a more formidable offering this year than the new album-length split by the Dutch bands Grim Fate and The Sombre. Entitled From Ancient Slumber / The Horrid Silence Thus Began (reflecting the names of each band’s side), it will get a CD and digital release by Chaos Records on September 10th, but we have a full stream of this ravishing experience for you today.

As you’ll discover, these two bands have different approaches in their explorations of death/doom, with Grim Fate‘s music more crushing and crippling and The Sombre‘s more entrancing (but still heavy as hell). This difference is part of what explains why the split is so tremendously good as a whole, and the rest of the explanation comes down to just how talented both bands are in the pursuits they’ve chosen for themselves on their sides of this split.

We have further thoughts about each band’s sequence of tracks (three from each of them), but of course feel free to skip ahead to the album stream so you will know more immediately what’s going on as you read. 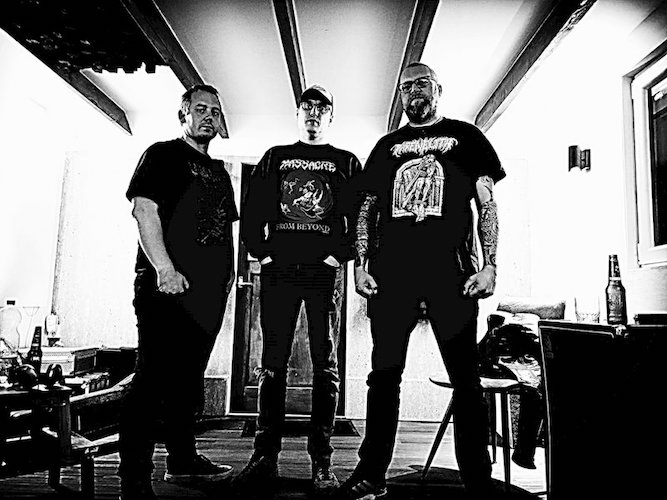 This Dutch trio have mastered a guitar tone that’s truly grim, a sound that’s abrasive and abysmal. The riffs in “Corpse Eater” veer from a hideous crawling and slithering sound to the infliction of brutal pounding punishment and episodes of feverish pain and scathing aggression. The sound is so overpowering in its depth and mutilating intensity that it consumes the mind. But this is only part of what makes the song so ghastly, so obliterating, and so emotionally ruinous. The sharp crack and slug of the drums, plus the abyssal turbulence of the bass and the horrid subterranean gurgles, growls, roars, and howls are vital ingredients too.

The vocals are both dictatorial and bestially crazed in the next two songs as well, and the radioactive guitar harmonies are just as dismal and deranged in their moods. “Smoarige Fine” creates a deep pit of despair and horror — but the drumming in the song also gallops and batters, with the riffing converting from diseased dragging chords into tremolo’d convulsions of frightening madness. Like “Corpse Eater”, it also inflicts a merciless, head-moving beating. But what might make the track stand out more than any of its other harrowing ingredients is a moody and mournful bass solo, whose relative clarity seizes attention in the midst of all the gouging tonalities that usually dominate, and guitar solos that radiate pure anguish. The ever-changing drumwork also makes a striking impression, especially when it detonates like bombs and the double-kicks rumble like a massive avalanche.

“Smoarige Fine” is nearly 11 minutes, and thus gives Grim Fate ample room to maneuver and to display the full dynamism of which they’re capable. It’s a towering and terrifying edifice of death/doom malevolence and misery. “From Ancient Slumber” is just a little more than half as long, but long enough to become the final nails in the mental coffin that Grim Fate have been building as your very uneasy resting place. Of course, it’s a sonic charnel pit of degradation and hopelessness, and of course it will jackhammer your spine in bursts of jolting savagery. But the dynamism of the songwriting is on display here as well — the band explode in typhoons of marauding and mangling ferocity, and the lead guitar wails like spirits lost in the ether, laden with nothing but memories of all they held dear and have forever lost. 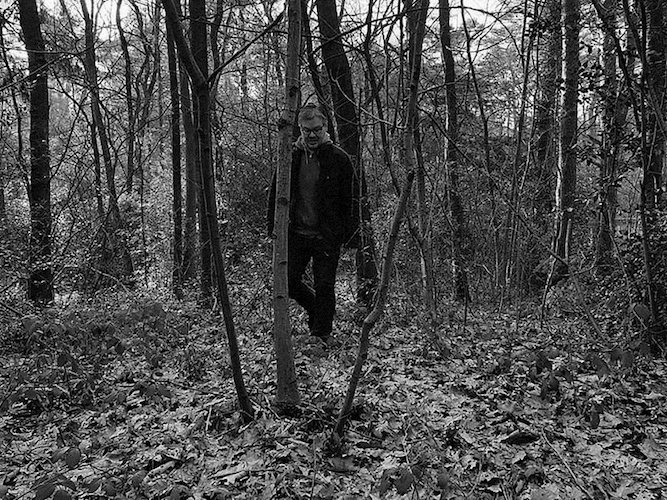 You may know that The Sombre is the work of Maurice de Jong, the prolific creative force behind Gnaw Their Tongues, De Magia Veterum, Cloak of Altering, Hagetisse, Golden Ashes, and many others. In his guise as The Sombre, de Jong displays a mastery of guitar tone on his three tracks as well. The riffs have a more “fuzzed” and less “Geiger counter” radioactive sound than what Grim Fate bring to bear, but it’s still a gruesome and ghastly experience to become immersed in them — and becoming immersed is inescapable as they cycle and repeat their horrifying mantras in the opener “Above th’ Aonian Mount“.

Once they have woven their cold and blood-congealing spell, accompanied by crushing percussive blows, de Jong introduces another ingredient — eerie, glistening harmonies that quiver and weep, flowing high above the pulverizing impacts in the low end. And to complete the tragic picture his voice wells up from cavernous depths like the sound of a monstrous leviathan. Seamlessly those treble-shifted harmonies also seem to change, channeling a feeling of yearning over bounding back-beat rhythms. It almost sounds hopeful, even as the riffing slashes and pounds and the vocals bellow in gargantuan fashion.

You’ll find that The Sombre‘s side of the split is a more varied experience than Grim Fate‘s (which is in no way intended to detract from the foregoing comments about the dynamism of that band’s songwriting). You’ll figure that out quickly once you hear the way that The Sombre adds layers at the outset of “His Pride Had Cast Him Out From Heav’n“, beginning with a bass solo and then bringing in a bright reverberating piano melody, a mesmerizing guitar motif that flows like a golden wine, and buoyant rhythms. By the time those abyssal vocals arrive, the mood of the music has subtly darkened, becoming more wistful and ultimately more tragic (accompanied by vocals that explode in shattering screams). The shine of the melody is still entrancing, but unmistakably heartbreaking. The closing moments of the song, by contrast, are distressing in a much more frightening way.

“His Pride…”, at least for this writer, is the most completely beguiling track on the entire split, the one that most powerfully beckons the listener back, and thus is a tough act to follow. But “The Horrid Silence Thus Began” is up to the challenge. Immediately drenching the listener in sounds of painful sorrow through a layering of guitars and keyboards, it then switches gears, expelling jittery fretwork spasms and bubbling bass lines, as well as the whine of anguish. Riveting tom-drum progressions kick the listener’s pulse — right before a hypnotizing and multi-layered instrumental excursion that’s both mystical and morbid. At the end, muttered words and glinting strings emerge over a brutal stomp.

And the split ends with a final frightening pronouncement, closing a truly gripping album-length experience.