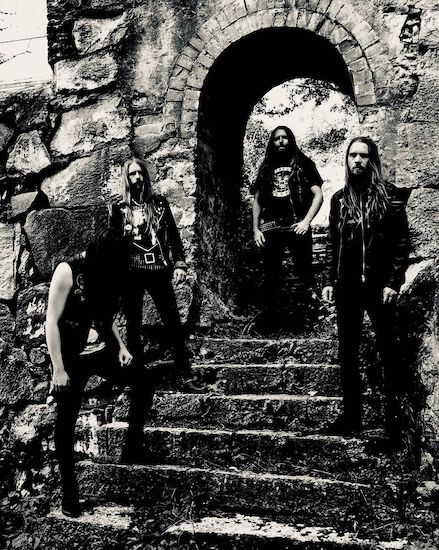 (We have a new interview from Comrade Aleks to present, one with members of the Swedish necro doom band Anguish, whose most recent album Doomkvädet was just released days ago by Sun & Moon Records.)

Check Metal-Archives and you find there a dozen bands named Anguish, but if you’ve ever heard this grim crew from Uppsala, Sweden, you won’t confuse their necro doom with anything else. Don’t get me wrong, they perform pretty traditional low and slow doom metal but their vocalist, the mighty J. Dee, seems to think he’s still in his old death metal band Graveless! Someone tell him!

I’m kidding, which I do sometimes.

But listen – that’s true, because from their debut album Through the Archdemon’s Head (2012) up through the most recent Doomkvädet they’ve stubbornly kept the same macabre delivery of doom things with the almost pious zealotry of bloody cultists. They aren’t as extreme as one might expect but following Anguish never was an easy ride, and certainly I need some help to introduce the band to our readers. And J. Dee… eh, nope… the band’s original guitarist David lends his helping hand (though J. Dee does make an appearance near the end).

Hi David! How are you doing? What’s going on in the Anguish camp?

I and the rest of Anguish are in good vigor and healthy as always. As times move further we do as well. Preparation to play live is undergoing, even though the pandemic still is in effect. But we must not be idle since it will be over at some point.

Actually I’ve seen that a few shows are scheduled in the US and we had a few small underground gigs in Russia as well. What about Sweden? Does anything happen there on the live front?

Yes, there have been a lot of small shows in Sweden already, though I have not been to one myself yet. But the most recent in my area was Prins Svart (with Mats Levén). And there are a lot of gigs planned in the near future here and in Stockholm. 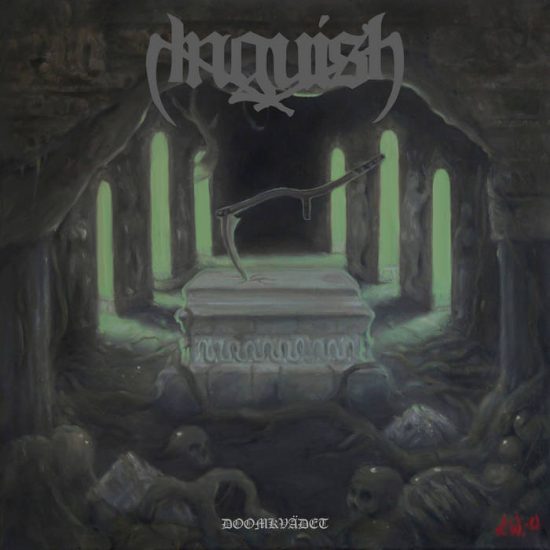 Your new album Doomkvädet is out on Sun & Moon Records. Do such events like the release of another album still cheer you up in times like these?

Certainly a new release always gives some kind of satisfaction and pride. We are for sure glad to see the light of our hard work and dedication spread. But we really did not need anything to cheer us up before. We have been trying to soldier on, just as we did prior to the pandemic.

How do you see your progress as a band on Doomkvädet? You have new drummer Björn Andersson in Anguish’s ranks, and it’s unlikely that the quarantine makes things easy when it comes to rehearsals.

Björn is a great addition. Not only because of his great experience through Ocean Chief, Vanhelgd, and Python (to name a few) but also because he as an individual possesses a distinct fire. What he brings to Anguish is hard to point out. He brings a fire, an understanding, a strong point of view. A fantastic definition of what doom is, and what it should be.

Doomkvädet is the band’s fourth album. Did you think to turn in another direction for that and try something new to expand the boundaries laid on you by the Doom Cult?

There was never a definitive way of direction we chose for Doomkvädet. We just wanted to write the heaviest and most grim album we had ever created to date. We never thought about limitations to be of any concern to us, besides the ones we set up internally. We only wanted write what we found suitable, for ourselves, at the time.

What did you do to try to achieve such high goals? Did you try new amps on your guitar or did you stick J.Dee harder in his side with your guitar’s neck to make him shout angrier?

Hahah, that must be it! No J. Dee is angry enough without our help! We are changing amps a lot — none of our albums is recorded with the same amp, nor the same guitar. On Doomkvädet we both played on my Hughes & Kettner Grandmeister.

So how did we achieve such high goals? I think maybe because I worked on the tracks for so long, even removed some tracks and wrote an extra track at the last minute just to have the feeling of no fillers, only high-score tracks on the whole album. J. does the same, he has so many lyrics that he is testing, and changing them one by one the closer we get to the recording session.

How do you see Anguish after 14 years of delivering this crude, heavy, and savage doom metal on permanent conditions? Do you see it as a hobby or do you fight the urge to compose and record your stuff constantly?

The fire of creation always burns. That’s why we do this. If you could call it a hobby or not is up to each individual. If we would not do this, then what would we do?

As far as I remember, your first albums Through the Archdemon’s Head (2012) and Mountain (2014) made a concept, with the second album as a sequel to the debut. I’ve checked – we had an interview back in 2016 and I believe I skipped Magna est vis Siugnah (2018). Did you tie Magna to this story as well?

Magna is tied to the two first albums storywise, but Doomkvädet stands on its own. Some references and influences from the earlier albums are of course present, but it has to be viewed as its own entry into the realm of doom. 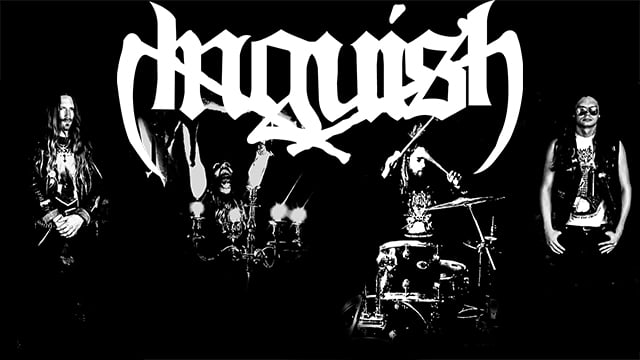 Can you tell more about this realm of doom?! What is it about? Doom, death, and damnation or something else?

J. Dee: Aren’t we all either doomed, dead or damned? As is the scene as a whole. Just as it should be. A crippled animal, rabid and violent

And there’s no fox’s muzzle on its cover! Just a scythe. The scythe and catacombs… Well, which is good in itself for a doom metal album.

J. Dee: Yes. But it is there. You just have to glare long enough.

How would you sum up the album’s worth in comparison with its predecessor?

J. Dee:  It is the darkest we have created to date. It is not intentional, just the way it came out. The way we wanted.

The doom metal scene lived through relatively good times in the past decade. It didn’t gain high success but got some recognition in the end. Do you feel as if the pandemic has changed this situation?

J. Dee: The pandemic has changed nothing but the ability to do live performances. Even though the world stops, the mind rages further. 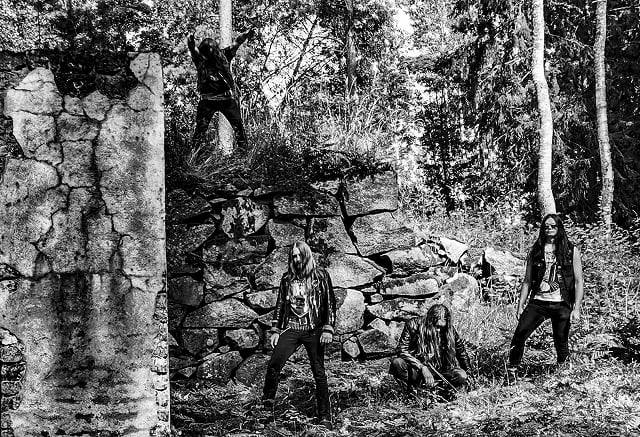 Do you keep in touch with Below and Black Oath? You recorded stuff for split-albums with both bands and I wonder if it was a result of friendship bonds between Anguish and them.

David is still keeping in touch with A.Th from Black Oath. They have talked many times about doing a small tour or at least a gig together, but in the end it is not we as a band who deicides who we’re gonna play live with. Our booker and manager Hell Frog Promotion handles that part for us. When it comes to Below, we are not keeping in touch with them anymore; the last time we talked must have been 4 years ago. But of course we would like to play with either of them one day.

Thanks for the interview, that’s all for today. And before we say goodbye there’s just one last question left – did we skip something?

Thank you too, it’s our pleasure, until next time, cheers!

Yeah you forgot to ask something about the artist who did the artwork maybe. Louise Wiik is the artist who painted our side of the split 7” with Anguish/Below, and we chose her again for Doomkvädet because we love her pro dark art. The only thing she had to work with was the lyrics and the demo tracks with no vocals on. And the result came out as a fantastic piece of necro doom art.

Indeed! Thanks for clarifying this! Goodbye!