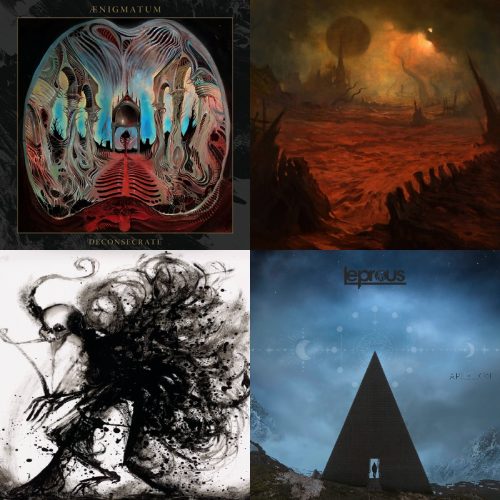 Is it just me, or was August just ridiculously busy?

Well, to be honest, I know it’s not just me, as I’ve seen/heard/read a lot of other people saying the same thing. And it doesn’t look like September is going to be any more laid-back (it’s only nine-days in and I feel like I’m already two weeks behind).

It doesn’t help, obviously, that I’ve been pretty damn busy myself over the last few weeks (as I’m sure some of you know), meaning that this edition of “Things You May Have Missed” is coming out much later than usual.

Still, its lateness doesn’t lessen the quality of the albums included by any means, which this month features three killer cuts from the blackened/deathly/dissonant end of the spectrum (at least one of which I’m sure will be a brand new name to most of you) along with one much proggier and much more well-known act whose latest album should, hopefully, bring some of their more wayward fans back into the fold.

So, without wasting any more time… let’s begin, shall we?

While we can’t (or shouldn’t) always expect every band to eclipse their previous work(s) with each new album… isn’t it nice when they do?

It certainly makes my job easier, if nothing else, since I can basically just tell you that Deconsecrate takes everything good from Ænigmatum’s debut and just makes it… better.

While the general consensus around how to describe the band’s sound is to call it some form of “Blackened Death Metal”, it seems to me that this particular tag doesn’t necessarily prime you the right way for what to expect from songs like frantic, trem-driven opener “Forged From Bedlam” or its even more complex (yet also more overtly melodic) companion, “Undaunted Hereafter”.

Because while Deconsecrate definitely has its “blackened” side, the term “Blackened Death Metal” has, for a lot of people, become synonymous with a certain sound which, well, you’re not going to find here.

Similarly, although there’s no denying the impressive technicality of the band’s four players – whether that manifests itself in the intricate, creative fretwork which carries “Disenthralled”, or the frenetic twists and turns of “Fracturing Proclivity”, or simply in the prodigiously potent (and pleasingly prominent) bass lines which loop and slither through every track – it wouldn’t feel quite right to call this “Technical” Death Metal. That particular shoe just doesn’t quite fit right either.

In that sense the band’s blend of twisted technicality and grim-faced intensity reminds me quite a bit of Stargazer – another group who don’t really fit neatly into any one particular category – albeit with a much heavier, and I do mean heavier, Death Metal influence underpinning their music.

Ultimately though, despite how long I’ve spent writing/talking about it so far, it doesn’t really matter what you call this music – songs like the bone-grinding, Immolation-worshipping “Larker, Sanguine Phantom”, and frenetic, fret-skittering closer “Animus Reflection” will still sound just as good regardless, and so you owe it to yourselves to give this one a listen if you haven’t already done so. You won’t regret it.

Much like the previous entry, the music of Russia’s Disillumination – and, yes, I know what you’re thinking: another killer new discovery from Russia… has NCS been hacked? – is generally tagged as “Blackened Death Metal” (although, since this has mostly flown under the radar this year perhaps “generally” is putting it too boldly).

In this case, however, while the tag definitely fits better – I’m not sure what else you could call it, really – it still needs a bit of clarification, because what the band have produced here isn’t some generic, cookie-cutter take on the (in)famous Polish sound, but rather a meatier and more malevolent strain of the genre that combines shards and scraps of Altarage’s crushing, claustrophobic density, Belphegor’s blistering, blast-fuelled intensity, and Sulphur Aeon’s grandiose melodic malevolence, into something almost insufferably brilliant.

From the simmering slow-burn (and subsequent tectonic eruption) of “Искра”,to the dissonant, doom-laden density of “Во Тьму Предвечного Слова”, these nine tracks assault your senses with a massive, morbidly-heavy guitar sound and a ruthless, unrelenting drumming performance – all topped off with a truly vile and bilious vocal presence – that gives absolutely no quarter and shows no mercy.

But while the album is pretty damn relentless in its pursuit of crippling catharsis, that doesn’t mean it lacks dynamics – just take a listen to the blend of brooding atmosphere and barbaric aggression which makes up “Жнец”, for example – or hooks (as the head-whirling heaviness of “Пятый Круг” and the irresistible rhythmic riffage of “Монолит” both demonstrate in their own way).

Nor is it afraid of a little melody now and then – in fact, most of the tracks have at least one or two moments of piercing, predatory melodic menace in them to act as a key counterpoint to the gruesome, gut-busting weight of the guitars, with some of the sinister lead work in the back half of the album being particularly deserving of praise – and each track, while still clearly the product of the same grisly group-mind, always has its own distinct identity, something which links it to yet also sets it apart from the rest.

Easily one of my favourite new discoveries of the year, if you only check out one album from this column (but, really, you should give them all a shot)… make it this one.

I was definitely a little bit gutted not to have been able to cover this one prior to its release, as I remember quite clearly being instantly enamoured with it from the second I heard “Terrestrial Obstructions”, the bone-jarring, nerve-jangling opening track from Purity of Corruption.

Still, I’ve got a chance to atone for my sins now, and I’m not going to pass it up.

Comprised of just two members (who, together, also make up dense and discordant Death Metal duo Acausal Intrusion), Feral Lord deal in a form of filthy, dissonance-driven Black Metal that sits somewhere between the raw brutality of Death Fortress and the abrasive angularity of early Krallice, all writhing riffs, rattling drums, and ragged, rabid vocals.

It’s a grisly, grimy listen, make no mistake, but one which you may well find to be unexpectedly compelling, for a variety of different reasons.

For one thing, the songwriting – something which, let’s be honest, is often what lets down a lot of these sorts of bands – manages to balance frenzied unpredictability with a sense of fluid, almost progressive, flow, meaning that even though, for the most part, you’re never quite where the next twist or turn is going to take you, you still find yourself being dragged along by the sheer inertia of the music (whether you like it or not).

Then there’s the group’s use of melody – or perhaps “melody” would be more appropriate – in tracks like “The Purity of Corruption”, “Failed Rebirths”, and “In The Realm of the Feral Lord” which transcends the usual “dissonance for dissonance’ sake” trope that often afflicts this style in favour of a blend of discordance and (dis)harmony that feels like an inversion or a negative melodic image that somehow manages to be cruelly, compulsively “catchy” in its own right.

The production style too is worth mentioning, for while there’s a roughness and a rawness to it that recalls the more “feral” sound of “Raw Black Metal”, there’s also a pointed precision to the way the various layers of dissonance and anti-melody, acerbic atmosphere and acidic heaviness, are woven together, hinting at a malevolent method to the group’s madness.

Leprous have always been a divisive band, but their last several releases have been especially controversial, due to the group’s decision to further streamline their songwriting (on Malina – which I am a big fan of, I must point out) and then to largely do away with their Rock/Metal roots in favour of a proggy Synth-Pop-meets-Trip-Hop sound (on Pitfalls – which, to be honest, I don’t really recall much of, as it didn’t make much of an impression on me one way or another).

Aphelion then has a lot to live up to/make up for (depending on your particular stance), not just as the band’s seventh album but as a record which many seem to think/hope will simultaneously push them to the next level and regain some of their lost fanbase from recent years.

Now, it’s not – obviously – a sudden return to the Bilateral days (although outstanding closer “Nighttime Disguise” does at least call back to them a little) but it’s definitely a much more striking, and much stronger album than its predecessor, with an ambitious, cinematic streak a mile wide (“Silhouette” and “Have You Ever?” once again have me wondering why no-one has asked Leprous to do a Bond-theme yet).

And, right from the beginning, as the slow-burn-to-bombast of opener “Running Low” sets the scene, there’s an overall sense that this album is a much more collaborative effort than its predecessor, and not just “the Einar Solberg show”.

The songwriting underpinning tracks like “Out of Here” and “The Silent Revelation”, for example, feels both more organic and more dramatic – with higher highs, moodier lows, and a more confident and natural sense of ebb and flow – while the various instrumental elements of the music seem to be working together much more closely and in balance (with the guitars in particular no longer feeling like an afterthought but actively establishing their presence, often by providing a powerful climax as the songs build in both emotional and sonic intensity).

Sure, there’s still a few duds – both “All the Moments” and “Castaway Angels” try to force an emotional connection which just isn’t there – but for the most part this is a damn fine album, one which reminds me exactly why I’ve long considered Leprous to be the closest thing we have to a modern version of Queen… not just because of the impressive talent and range (and charisma) of their respective singers, but due to their ability to turn their minds/hands to a variety of different musical styles – no matter how poppy or proggy, Rock or not – while still remaining who they are, through and through.

7 Responses to “THINGS YOU MAY HAVE MISSED (BUT SHOULDN’T)”