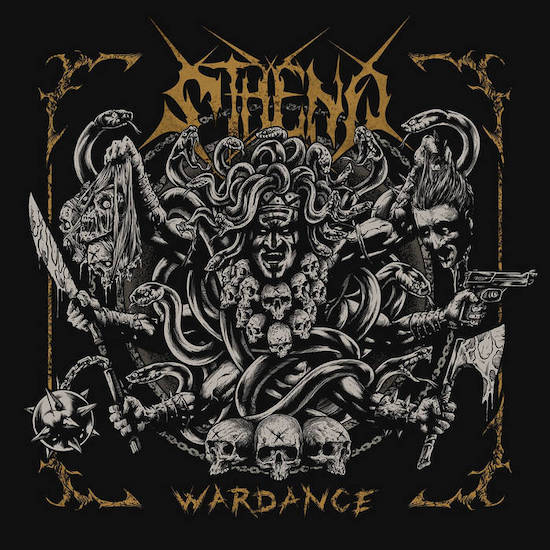 Clues to the worldview, and the music, of the Greek band Stheno can be gleaned from the titles of their releases, which began in 2014: Damnation Is Forever, Wolfkind, Liberty Crawls in Waste, Primitive, and now their forthcoming second full-length, Wardance (which is set for release on October 8th via 7 Degrees Records and Chaos & Hell Productions.

Such a hostile and nihilistic perspective demands equally aggressive and relentless measures in the music, and in discharging their fury Stheno haven’t confined themselves within any neat genre boundaries, instead blurring the lines between grindcore, black, death, and other forms of metallic extremity. Their war-themed new album is the product of some line-up changes and includes Christian Chaco, frontman of German death-grinders Keitzer, on vocals.

What we have for you today is a video presentation of the third track premiere from the new album…. 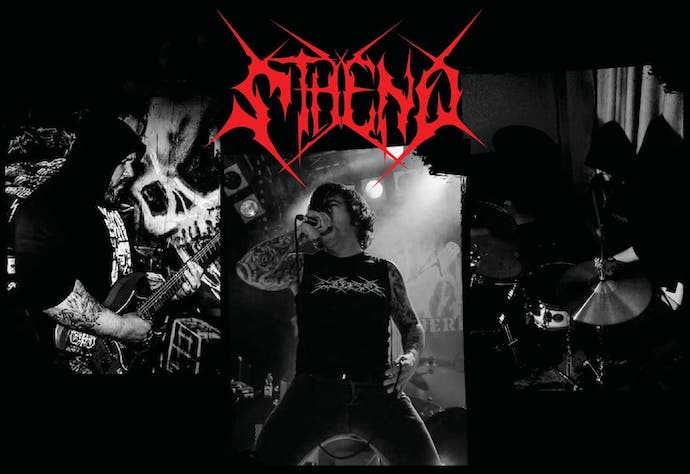 Stheno describe the song this way: “‘Fire!’ is a short song but it’s like the heavy firepower, strong armour and great battlefield mobility of a tank! Imagine you are inside, you are responsible for the cannon and you hear only the word…Fire! and destroy the bastards! That’s the soundtrack of this destruction, feeding the battlefield’s hunger. This is who we are and this is what we do…this is fucking Stheno!“

They’re not fucking kidding either. Once the command is given Stheno unleash a rapid-fire percussive cannonade, a firestorm of wild, brazen riffage, and a torrent of enraged howling vocals. With only one brief pause, the intensity is unrelenting as the band create a frenzied musical battlefield. Yet for such a full-bore, no-holds-barred assault, the song also has a throughline of exotic, dervish-like melody that gets its hooks in the head despite how brief the track is. But see for yourselves:

Wardance was produced by Stelios “Stelth” Koslidis. 7 Degrees Records will release the album on vinyl and digital formats, with apparel, and Chaos & Hell Productions is selling it in CD and MC editions. The album is recommended for fans of Marduk, Anaal Nathrakh, Rotten Sound, and Retaliation. After the following links, be sure to check out streams of two other previously released tracks — “RPG” and “Snafu (This time… we die!!)“.

One Response to “AN NCS VIDEO PREMIERE: STHENO — “FIRE!””