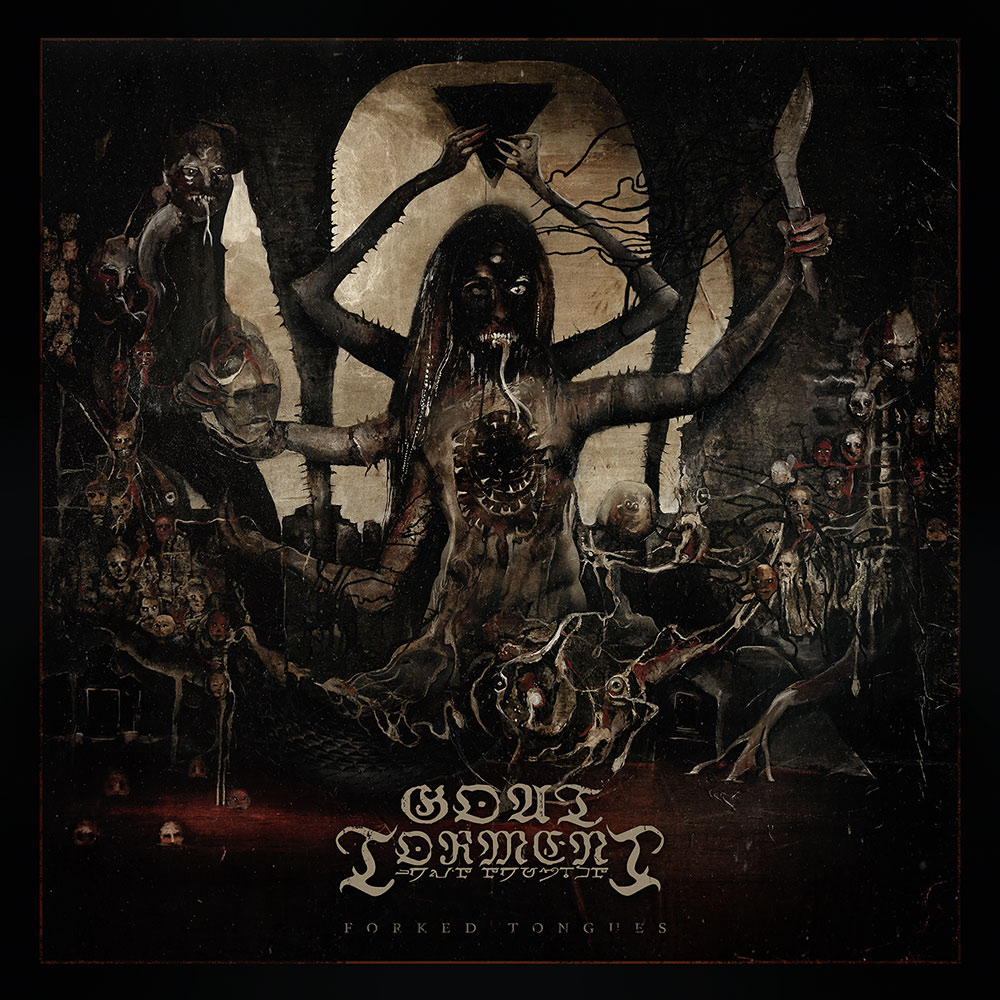 If you’re not already educated about the kind of music Goat Torment make, one long look at the album art will tell you much of what you need to know. There’s one important piece of imagery missing from the artwork though — massed howitzers and machine-guns firing at will. The song you’re about to hear sounds like a mechanized war zone, one that’s also plagued by frenzied demons, who reach heights of mania in a really stupendous guitar solo.

Of course the song is called “Disorder and Disruption“. It’s from the album Forked Tongues, which will be released via Season of Mist on October 29th.

The latest song from Hate‘s new album Rugia comes with a torches-at-night occult-themed video that’s a feast for the eyes. The song itself is a gripping blend of madness and munitions, of savagery and sinister peril. Bass-lovers and admirers of fanatically imperious growls should also find a lot to like about this song.

Rugia will be released by Metal Blade on October 15th.

A feeling of sadness  comes from knowing that To the Depths We Descend… will be the last album released by this venerable and formidably influential Greek black metal band. It is dedicated to the group’s life-long bassist Baron Blood, whose life left him almost two years ago.

The satan-worshipping song below, like its name, is a grand inferno. The riffing blazes, the pummeling drumwork is turbocharged, the vocals are incendiary in their viciousness. Yet it’s not entirely a conflagration, as you’ll discover upon encountering a pair of duets between the bass and something that sounds like a harpsichord.

The album will be released by The Circle Music (CD), Rabauw (Tape) and Necromantia (Digital) on October 15th, with a vinyl edition coming in late November via Hell’s Fire Records.

Next up is a cover song that was originally intended to be part of an album in tribute to L-G Petrov, but his subsequent death led to the shelving of the project, though it may be resurrected. The song is “Chief Rebel Angel“, the opening track from Entombed‘s 2001 album Morning Star.

The original of the song is a genuinely diabolical homage to the chief rebel angel, and Reek‘s rendition is a largely faithful cover, though with some tweaks, including a guitar tone that’s even more massive and vocals that are no less wild and maybe even more bestial. Honestly, it sounds even more frightening and powerfully destructive too. Somewhere, L-G is smiling.

Reek‘s line-up on this song consists of Håkan Stuvemark (vocals and guitars), Jon Skäre (drums), Rogga Johansson (backing vocals), and Mathias Back (bass). Reek has also completed work on a new album, which we’ll be excited to hear.

Speaking of frightening, this next song definitely is that. Though the skull-snapping drumwork is mostly measured (but accented by occasional avalanche-strength spasms), the vibrating riffs are demented and doomed, creating hallucinatory sensations of dread, degradation, and disease. It’s hard to conceive of more abyssal vocals than you’ll find here, and hard not to experience chills down the spine when they convert into intense wailing screams.

“Congruence Of The Profound Forlorn” is a long song, and all of it is horrifying, including in its dismal slowest movements, when the soloist milks his guitar for all the misery it’s capable of generating, and certainly in its most mauling and mangling phases, when unreasoning madness and fatal sickness reigns.

The band includes members from Cenotaph, Hacavitz, Shub Niggurath, Profanator, Castelumbra, Xiat, and Malcria. The song originally appeared on the CD edition of this band’s split with Pestilength, and has been adapted for a new 7″ vinyl release entitled Cadaveric Continuity Of Unreal Perspectives. The vinyl will also include “Care Data Vermibus” Rehearsal as a bonus track. It will be released through Ancient Urn Records and Death In Pieces Records.