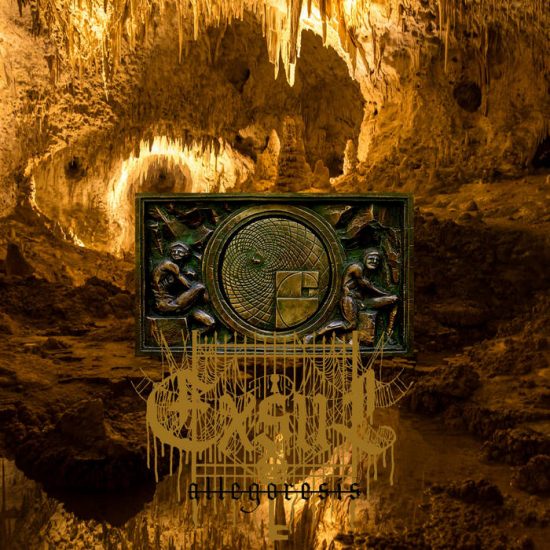 In writing about new music I sometimes become intrigued by the titles of records or songs, or by conceptual themes or cover art, even if none of that may have anything to do with the experience of listening. Driven by nothing more than intellectual curiosity, I find myself tunneling down internet rabbit holes to satisfy that curiosity, and maybe to learn something new along the way. That happened in spades with Allegoresis, the forthcoming second EP by the Tucson-based death metal band Exsul.

There were already manifold hints of Exsul’s unusual intellectual interests in the song titles on their 2020 self-titled debut EP, and even more so in the titles strewn across their new one. Consider the name of the first song that was revealed from Allegoresis: “How in the Land of Satin We Saw Hearsay, Who Kept a School of Vouching“.

At first I thought this might just be clever wordplay, substituting “Satin” for you-know-who and “Hearsay” for “Heresy”. But my researching revealed that it is instead the title of Chapter XXXI of The Fifth Book by the French Renaissance writer, physician, humanist, monk, and Greek scholar François Rabelais.

And that isn’t the only reference to a Rabelaisian work in the songcraft of Exsul. There’s another song on the new EP named “Pantagruelion“, which I discovered is a name given by Rabelais to “a magical plant capable through its many applications of furthering the progress of the human race”. It appears in The Third Book (Le Tiers Livre in French), yet another book of the heroic deeds and sayings of the giant kings Gargantua and Pantagruel.

And then there’s “Psychomachia“, the name of the song we’re premiering today. Here’s what you’ll find about “Psychomachia” in The Font of All Human Knowledge: 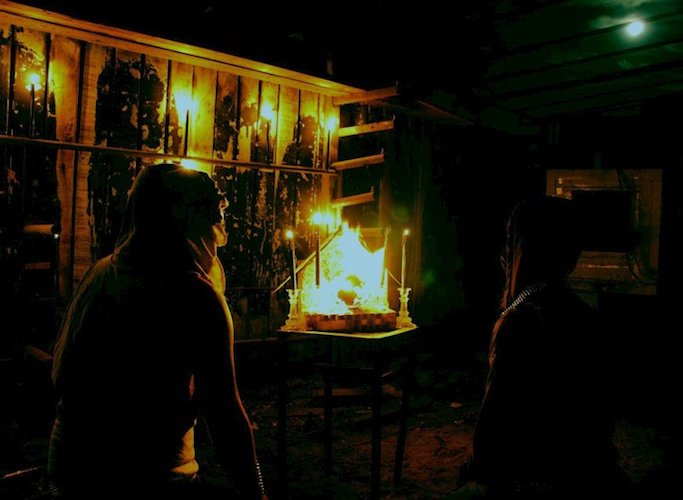 “The Psychomachia (Battle of Spirits or Soul War) is a poem by the Late Antique Latin poet Prudentius, from the early fifth century AD. It has been considered to be the first and most influential “pure” medieval allegory, the first in a long tradition of works…. In slightly less than a thousand lines, the poem describes the conflict of vices and virtues as a battle in the style of Virgil’s Aeneid…. The word may be used more generally for the common theme of the battle between good and evil, for example in sculpture”.

And oh man, there’s more to be learned through other song titles on the EP… but I’ll leave that for a bit later… because surely you came here for the music and not to be tutored in literature and Greek philosophy (that’s what’s coming later).

So let’s consider that first Rabelaisian song that premiered from Allegoresis. To quote my own previously disclosed impressions of “How in the Land of Satin We Saw Hearsay, Who Kept a School of Vouching” (because if I don’t quote myself, who will?):

“Get your crash helmets on, because this new song by Arizona-based Exsul is ruthlessly bludgeoning. But in addition to being an unhinged assault on your skull and spine, it’s also a violent attack on sanity. Heavy on the dissonance and unbounded by any kind of steady or predictable progression, the guitars create a jarring sequence of grand mal seizures, undergirded by massive lo-frequency heaviness, with some ferocious slashing and hammering in the mix. In keeping with all that maniacal destructiveness, the vocals are a cornucopia of horrors”.

And now let’s consider the world-eating song we’re premiering today, the one apparently named for that magical plant, which might or not be hemp:

With the words voiced in haughty growls, the song crawls and stomps, bathed in abrasion, and writhes in a savage paroxysm of clobbering drums, slaughtering chords, and maniacally screaming leads. It does its best to splinter skulls with jagged jolting grooves, but continues to combine that rank brutishness with frenzied, ear-mauling insanity. There’s an almost improvisational quality to the cavorting and careening rhythms and the dense, slashing and swirling fretwork, though Exsul repeatedly return to exercises in primitive, pile-driving, bone-smashing brutality, and eventually begin to crawl and stomp again in a sonic display of ultimate catastrophe.

There are four more songs on the EP. The title of one of those, “Glaucon’s Dilemma“, sent me down what turned out to be a very deep rabbit hole. It refers to an argument made to Socrates by Glaucon (one of Plato’s brothers) about the subject of justice and the bases of social order, a debate that continues in philosophical circles to this day. It has also been linked to discussions of modern game theory.

The title of the EP’s opening song, “Noesis“, also has its roots in Platonic philosophy, but I won’t attempt to explain it here. And then of course there’s the title of the EP itself, Allegoresis, which refers to the interpretation of written, oral, or artistic expression as allegory. And indeed, it’s likely that at least lyrically, every one of the songs is an allegory, a tale with a hidden meaning. (Except maybe “Sweet Revenge“, the only song title that didn’t send me searching for its meaning.) I can’t wait to get my hands on the lyrics — though I don’t have them yet.

I won’t spoil what the music of these remaining four songs sounds like — at least not yet. Though I will share the summing up of the EP in the press materials for Caligari Records, who will be releasing it: “sounds summoned by an army of primordial troglodytes gifted extraterrestrial sentience”.

Caligari will release the EP on October 22nd, on CD and cassette tape formats.

One Response to “AN NCS PREMIERE: EXSUL — “PSYCHOMACHIA””