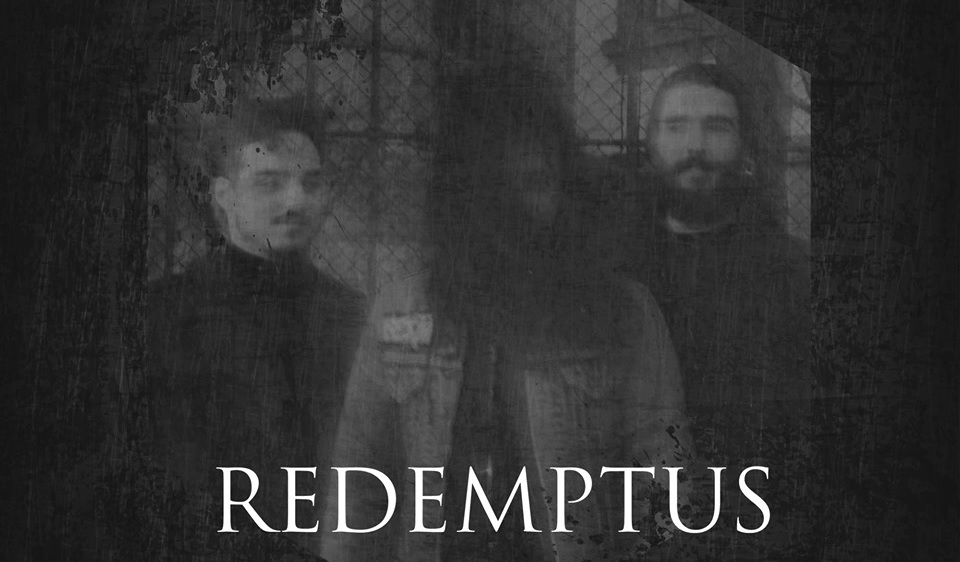 The central thesis of this site has always been to primarily focus our attention and efforts on the underdogs, the underrated, and the underappreciated of the Metal scene.

Of course, exactly who qualifies for this is somewhat debatable, especially when it comes to the regular retrospective provided by The Synn Report, where we’re just as likely to go to bat for a “big” name whose work we think has been undervalued or unfairly maligned as we are for a relatively unknown band whose merits have gone unsung for far too long.

Today’s edition definitely leans more towards the latter than the former, as while Portuguese trio Redemptus aren’t an entirely unknown quantity, they’ve definitely been dwelling below the radar for far too long in my/our opinion, and it’s high time that more people were made aware of the group’s abrasively aggressive and asphyxiatingly atmospheric blend of sludgy Hardcore and punky Post-Metal.

There’s no denying that the band’s debut is still a little rough around the edges, but then that’s also part of its charm, further reminding you of the group’s Hardcore roots even as their songwriting becomes beefier, burlier, and more metallic.

Once the ambient intro of “Black Tidal Waves Moan” has finished setting the scene you’ll quickly find yourself assaulted by the churning riffs, brutish vocals, and hanging, doom-laden chords of “Cobblestone”, followed by the moaning drone of “Redemption”, with the former hammering home the sludgy savagery of the band’s sound (while also concealing a subtle undercurrent of moody melody) and the latter providing a showcase for their more experimental and atmospheric inclinations.

The gravel-gargling vocals, gargantuan riffs, and gloomy ambience of “Tricks of the Trade” and “Busted, Disgusted, and Not to Be Trusted” (with the eerie strains of mid-album interlude “Paean (Darkness Is Coming)” sandwiched between them) find the band continuing to pull no punches, spitting lyrical fire and vocal venom in an emphatic rejection of corruption and conformity, while also toying with a number of unexpected melodic elements and some pleasingly unconventional song structures along the way.

“True Truth” is a throwback, or maybe just a genetic offshoot, to the more purely Punk/Hardcore side of the band’s sound, with its highly melodic guitar lines and rippling bass driving things forwards in a much more upbeat manner, at least at first, until the song’s second half swings things back towards the more experimental Sludge/Drone side of things, after which “Rebuild Brick By Brick” fuses these two sides/ideas together more cohesively into a chugging, churning, Post-Metal monster that’s equal parts Shai Hulud and Sumac.

Concluding with the buzzing, hypnotic bass-lines and mesmerising melodies of “Rebuilding” – which swiftly descend into a convulsive mass of discord and chaos, and I mean that in a good way – there’s no denying that We All Die the Same lacks some of the polish (not to mention the power) that the band would come to develop in just a few short years, but it’s also worth listening to, both to get a glimpse of what’s to come (especially in the group’s willingness to experiment already) and as a solid slab of Sludge/Hardcore/Post-Metal goodness in its own right.

A little over two and a half years on from their debut Redemptus returned with the significantly darker, doomier, and heavier strains of their second album, Every Red Heart Fades to Black, which begins with the bleak and creepy intro of “Faint and Distant Whispers” but soon gives way to the suffocatingly heavy strains of “In a Deep Hole”, whose groaning riffs and subtle, melancholy melodies effortlessly blur the boundaries between grim Sludge and gloomy Post-Metal, after which the mix of grimy grooves and brooding atmosphere which makes up “Opposable Guilt” reminds you that, no matter how bold and bombastic the band’s songwriting gets, they’re still a bunch of down ‘n’ dirty punks underneath it all.

Case in point, the lurching, discord-tinged riffs and snappy, bouncy drum work of “A Grim Reminder” are wrapped around a core of righteous lyrical indignation, all building towards a hefty, pulse-raising Punk-Metal finale which raises the intensity to a new level just before the unexpectedly poetic, experimentally atmospheric strains of “At the Altar of Competition” change the feel of the album entirely.

This track, as you might have already guessed, marks something of a turning point for the record, as is quickly demonstrated by the impressively immersive and impassioned “Across This Ocean of Grief and Beyond”, which finds Redemptus incorporating even more melody, and even more dynamic diversity, into their sound, simultaneously leaning into both the moodiest and heaviest ends of the Post-Metal spectrum at the same time.

That’s not to say they’ve totally abandoned everything that made the first half of the album work by any means, as one listen to the surging Doom-Punk of “Pile of Papers” should prove, but there’s a definite sense that tracks like “Unravelling the Garden of All Forking Paths” and “Peered Into Everyone’s Fate” – the former being six minutes of simmering atmosphere, shimmering melodies, and rippling distortion, the latter, as well as being the de-facto “title-track”, showcasing some of the doomiest riffs, gloomiest ambience, and rawest emotion on the entire album – are another step onwards down the band’s evolutionary path.

This is made even more clear by titanic ten-minute closer “May This Chamber of Secrets Enclosure My Heaviest Burden”, which is easily the most moving and melodic song Redemptus have ever written, but which also doesn’t skimp on the heaviness or dynamic intensity as it builds, slowly but surely, towards a penultimate crescendo, before closing with a poignant message of hope and acceptance which rings all the more true for how unexpectedly honest and heartfelt it is.

The group’s latest album (their third, if you haven’t been keeping count) was released earlier this month and, in many ways, picks up exactly where their last record left off, finding the band bearing their beaten, bleeding heart out on their sleeve even more prominently than ever, while also melding the melodic and metallic, aggressive and atmospheric, sides of their identity together even more closely.

The opening title-track is just one gaping wound of raw emotion, bruising intensity, and moody melody, all heaving riffs and haunting atmosphere, ragged riffs and raging vocals, and the follow-up, “heads you win tails I lose” only continues to pick and poke at the edges of this injury, it’s lurching guitars and gruffly poetic vocals – all propelled by a loose-limbed, freewheeling performance from drummer Marcos Martins – ensuring that neither the band or the listener will be healing any time soon.

Sure, “sunk in perpetual tidal waves” provides some momentary respite with its more artistically ambient strains, but “it was never meant” is right back to scratching at that half-formed scar tissue, tugging at your brain like an off-brand mix of Amenra and Entombed that’s equal parts groove and gloom.

The first half of the record climaxes with the sludgy soundscapes of “still resemble the silence”, a sombre slow-burn of buzzing bass-lines and bleak, brooding melodies, thrumming riffs and rattling percussion, which also serves as a showcase for one of the best – and more varied – vocal performances on the record (especially the desperate, yearning clean vocals which crown the song’s mid-section).

“how much pain can fit in one’s chest” is a great example of the sort of downer, doomy (Post) Hardcore that Converge occasionally dabble in, replete with some surprisingly intricate percussive rhythms and eerily compelling clean vocals (with the latter serving as an elegant counterpoint to the rough ‘n’ ragged howl with which the majority of the lyrics are delivered).

“forgive and forget” is, as befits its title, a short-but-sweet piece of moody, melody-driven Post-Metal which serves as something of a meditative pause in the action prior to the outright riffosity of “purged by light, engulfed by darkness”, which channels both latter-day Isis and early 2000s-era Tool, along with a hefty helping of gritty Hardcore and squalling Noise-Rock influences, into one of the best (and most affecting) tracks on the album.

Concluding with the visceral pairing of “swallow the tears” and “doomed to crumble” – the former an esoteric and experimental blend of pretty much all the band’s various inspirations, musical or otherwise, the latter a dynamic and appropriately doom-laden anthem of jagged guitars and ragged growls – it’s pretty obvious, to me at least, that blackhearted is both the band’s most creative and cathartic work yet, and one that won’t be easy to top.