Right here, right now, we have a great example of why music videos can matter. This one checks all the boxes: Highly energetic performances by the band members (who seem to be having a hell of a time), expertly filmed and edited; a creative depiction of an incendiary event that’s central to the lyrical theme of the song; and of course the success of the video in introducing some very good music to people who might never have been aware of it (including this writer).

The song is “Cendres et Ruines” (“Ashes and Ruins”) by the German progressive death metal band Ayahuasca. The song was originally released on Ahayuasca‘s 2018 debut album Beneath the Mind. Obviously, a lot of time passed in between the release of the album and today’s unveiling of the video. In that time a lot has happened, not only in the wider world but also in the life of this band, including line-up changes. And thus, as the band say, the video marks the end of one volume in their life, in advance of something new to come. And not surprisingly, the video itself required a lot of time and effort by a lot of people to bring it to fruition (you’ll see the names of many of them at the end of the video). 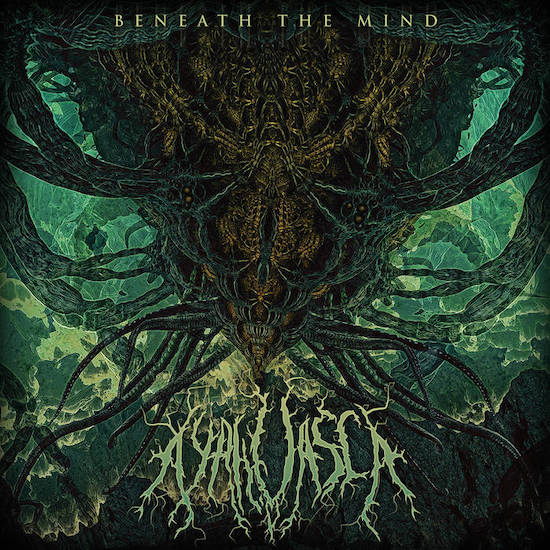 “Cendres et Ruines” is itself an arresting piece of music. The rhythm section thunders in riveting fashion. The riffing blares in grim and ominous bursts. Eerie and unnerving bits of guitar melody spear out and upward, swirling and squirming. Vocalist Sliman Abu Sitta rages in raw howls and vicious growls. The drumming continually seizes attention, energizing the inventively groovesome  and brazenly bombastic elements of the track — even as the mood of the music grows increasingly fiery and demented.

Ayahuasca also seamlessly accent the song with ethnic instruments — there are 7 people in the band, and they all contribute to its multiply textured tones. And thus even though the track is a jolting and explosive experience, it’s a brain-twisting one too. It reaches a zenith of electrifying intensity through a screaming guitar solo and tension-torquing leads.

At the end, a stark musical change occurs: The dulcet tones of chamber-music strings soulfully channel deep sorrow in a lament that also fits the lyrical themes of the song. Those themes concern ancient empires brought to ruin by catastrophic fire, a devastation that becomes “an act of recreation”, leading to something necessary and new.

We mentioned earlier that this video marks the end of a chapter for Ayahuasca, including a final appearance by the vocalist whose animated face is a constant attention-grabber in the video (the identity of the new vocalist will be revealed tomorrow). We share here the band’s comments about the video and their own changes:

“A project that cost us time and effort like nothing before: The video for our song titled ‘Cendres et Ruines’. And after almost 3 years, we can hardly believe that the time has come to celebrate its release. The idea was very ambitious, the planning was very long and the implementation took even longer. But despite all the circumstances we pulled it off! And we can proudly say that something great came out of this crazy adventure.

“This song is featured on the album Beneath the Mind which was released in 2018. A lot has happened since then. The band line-up has changed, some of the founding members are no longer with us and a new front man is joining us in the near future. Today we already have new music material and more is in the making, so this project is our way to finally close the Ayahuasca chapter: Beneath the Mind.

“We are of course a bit sad, but at some point every book is read to the end, the last page is turned and that’s it. That is the cycle of life. And as portrayed in our ‘Cendres et Ruines’ video, every end is the beginning of something new. And fuck yeah, we’re more than ready and prepared to kick it up a notch on the next album!”