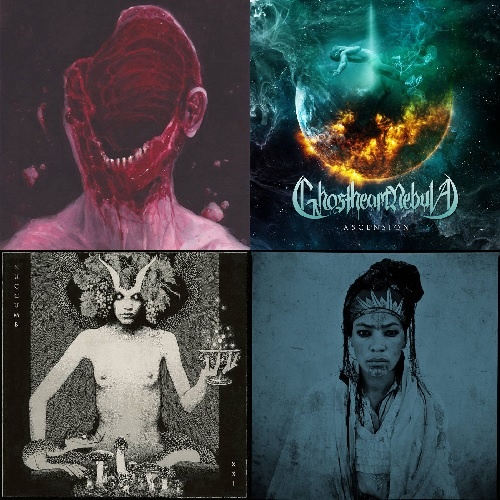 Well then… how exactly do you try and address a month like September, which was, arguably, the biggest and busiest month of the year for new releases yet?

Hell, my initial shortlist (sorry, “short” list) for this column was a good eight or nine albums long, an even though I successfully spun one of them off as part of last month’s edition of The Synn Report, that still left me with more options than I could possibly fit into one article.

So what I ended up doing, to be frank, was just picking not-entirely-at-random and going with my gut for this latest edition of “Things You May Have Missed”, which ultimately ended up covering an intriguing array of artists/albums from across the (Extreme) Metal spectrum.

In hindsight I’m not really surprised that Defacement chose to self-title their second album because, as good as their first release was, it’s album number two which is really going to define them as a band going forwards.

Don’t get me wrong, 2019’s Deviant was a more than solid slab of post-Incantation Black/Death Metal, but Defacement is an altogether darker, murkier, an in may ways much more progressive affair, which ups the ante in terms of both sheer heaviness and crushing density while also making even greater use of space and dynamic to explore the band’s penchant for eerie ambience and claustrophobia-inducing atmosphere.

And while it might initially seem disappointing to learn that there’s only four “real” tracks on this album, the fact that these four numbers run anywhere between six (and a half) and ten minutes in length, combined with the ongoing realisation that the record is clearly designed to be listened to as one cohesive entity, with the various instrumental interstitials (Limbo I-IV) serving as key parts of the overall puzzle, means that you’re definitely going to get your money’s worth, and then some, from this particular piece of abrasive art.

The band’s increased embrace of jagged dissonance and unpredictably organic song structures makes this one album which is both harsh yet hypnotic, and whether it’s the writhing riffs and resonant anti-melodies of “Shattered”, the tortured tremolo and torrential blasting of “Disavowed”, or the mesmerising intensity and subtle complexity of “Disenchanted” (with the latter’s drum work being an extra-special highlight) there’s something about their sound that helps it worm its way under your skin even as it’s trying to flay the flesh from your bones.

Defacement is, as I’m sure you’ve gathered, not an “easy” listening experience, but – just like similarly seditious and sinister artists like Abyssal, Altarage, and Vassafor with whom they share a clear kinship – those who are willing and able to give it the time, to peel back its various layers and connect with the beating, blackened heart within, will discover that, as epitomised by gruesomely infectious, unconscionably vicious closer “Wounded”, that this is one album repays all their attention and effort tenfold.

Well, for one thing, an introduction to the band in question might not be a bad place, as there’s a good chance that Ghostheart Nebula – whose debut album this is – might not be familiar to a lot of you, since the Italian doomsters only have one previous release, 2018’s Reveries EP, to their name thus far.

Dripping in gloomy atmosphere and positively steeped in soul-stirring melancholy, the band’s music sits somewhere between the Melodic Death/Doom of Swallow the Sun and the proggy Funeral Doom of Eye Of Solitude (especially during outstanding opener “Mira”, which – while you would never call it “traditional” Funeral Doom – absolutely excels in melding colossal, drawn-out chords and shimmering strands of melody, heaving gutturals and haunting cleans, into an eleven-and-a-half minute long monument to misery).

And while their sound is reassuringly familiar in many ways, the band add just enough freshness to it – an extra dose of anguish to the vocals in “Chrysalis”, a hint of unsettling theremin during “The Cage” – to make Ascension feel both like a homecoming and a step into the unexpected at the same time.

It all culminates (over the course of just over twenty-seven minutes) with the tripartite title-track, which begins with the grim beauty of part I, “Cosmic River”, whose sheer darkness and density (just listen to those relentless, rumbling kick drums) is both accentuated and distinguished by the mournful vocals of guest-singer Gogo Melone, after which the towering riffs, tormented vocals, and spine-tingling ambience of part II, “My Burial Dream” (which also includes a truly spellbinding solo section) up the doominess and heaviness even further.

Concluding with the third part of this album-defining trilogy, Ascension marks itself as the sort of debut that both instantly defines who the band are (and also marks them as ones to keep a very close eye on) but also leaves them a lot of room to grow and develop in the years to come, especially if Ghostheart Nebula are willing to expand upon the hints of spacey ambience and cosmic atmospherics which they’ve displayed here already.

Ones to watch, definitely.

And some bands actively want to hurt you.

Hyperbolic? Maybe. But only a little, as one listen to the second album from Californian Death Metal quartet Succumb will swiftly demonstrate.

It’s not a one-note affair by any means – “Okeanos”, for example, incorporates some seriously sickening grooves, and the strangled riffs and strafing drums of “Graal” all reverberate with a creepy, Disso-Black flavour which also seeps through in other places as the album goes on – but there’s no denying that Succumb are here to inflict maximum damage with extreme prejudice.

It’s also no surprise, given all that, to frequently see them being compared to bands like Pyrrhon, Portal, and Mitochondrion (especially during longer tracks like “Smoke” and cataclysmic closer “8 Trigrams”), as the California crew definitely share a similarly abrasive ethos of “music as a weapon” with those other bands.

But there’s also a sense that Succumb are a more rarefied and refined beast in some ways… although I should clarify that I use the term “refined” more in the sense of them sounding like they’ve been run through an industrial smelter… one where all the extraneous elements have been stripped away, all the avant-atmospheric pretensions burned off, leaving nothing but a glowing, molten core of pure aggression.

That’s probably why certain other writers have already (and accurately) pointed out the almost Hardcore-like bent of the band’s music, especially in tracks like “Lilim” (which sounds like Morbid Angel and Coalesce hate-fucking in a bed of razors) and “Aither” (which is what would probably happen if you fed the members of Cannibal Corpse through the Mathcore grinder) which get right to the meat without mercy or restraint.

And yet, I have to say, for all its instantaneous impact and near-unrelenting intensity, XXI is also a real grower, and I still find myself picking out newfound nuances in the chaos with each and every listen, proving that this isn’t just “music as a weapon”, it’s madness with a method.

Hailing from Tunisia in North Africa, socio-political Punk-Metal firebrands Znous are an unusual band, and Znousland 3 is an unusual album.

For one thing, it’s contentious to even call it an album, seeing as how it only clocks in at a little over twenty-six-and-a-half minutes in total (although there’s more than enough metallic meat on its bones to justify its inclusion here), and, for another, it’s a difficult record to slot into any one particular pocket or paradigm, being a little bit Metal, a little bit Punk, a little thrashy, a little folky, a little bouncy, and a whole lot more besides.

But, then, you get the impression that Znous like it that way, and the fact that – by virtue of both sheer grit and simply geography – they’re not strictly beholden to any one genre, or rigidly subscribed to any particular style, is actually one of their greatest assets.

Opener “El-Mansiette” is probably as good a starting point as any for those of you wanting to get a feel of what the band’s anti-authoritarian, pro-humanitarian brand of Nu-Metal-Punk is really all about, as the song’s mix of rippling percussion and bombastic grooves (reminiscent of early Soulfy), all propelled by a sense of stripped-down, Hardcore-influenced moment (which also recalls the electric dynamism of latter-day Sepultura) builds to an almighty crescendo that should hit you nice and hard no matter where you fall on the Metal spectrum.

“Swed Ellil” is just as, if not even, better than its predecessor, coming across like a blend of Meshuggah and Fear Factory (replete with some rather cool melodic/ambient moments) fronted by Sepultura’s Derrick Green, which climaxes in a rollercoaster of raging blasts and liquid-metal lead guitar work, after which anti-addiction anthem “Het Ch3oul!” finds the band fully embracing the darker side of Nu-Metal, before “Esmi Mabrouk” bridges the gap between this and the more Scandinavian form of moody melodic Death/Doom.

If that sounds like a lot of bases to cover in just four songs, well, you’re right, it is. But Znous somehow make it work regardless, and the climactic trio of “Top Rojle” (think Living Sacrifice meets Living Colour), the haunting, folk-melody infused “Sidi El-Insan”, and reckless, riff-driven closer “Kigulu”, continue to demonstrate just what’s possible when you put all concerns of style or genre aside and focus purely on getting your message, and your music, across.