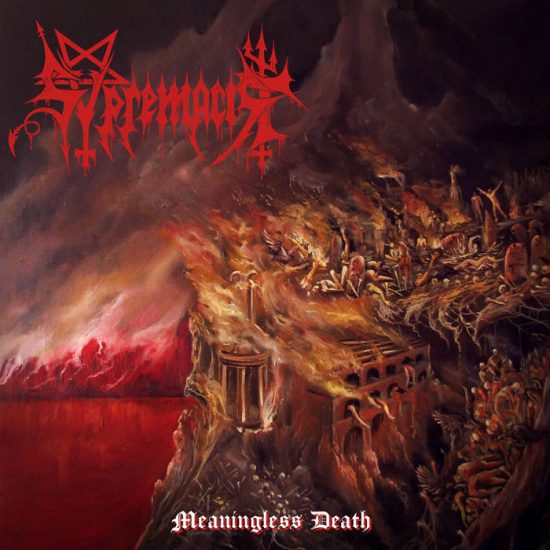 We’ve been covering the fiery ascent of the Israeli black metal band Svpremacist since their debut release in 2018 — Black Fuck You Metal. They released a second demo that same year (Book Burner) and a single for a compilation (“No Life Matters“) the following year. And now a debut album is at hand. Entitled Meaningless Death, it’s set for a November 5 release by the UK label Repose Records.

Our previous writings about Svpremacist‘s feral brand of take-no-prisoners black thrash have included such phrases as “raw and ripping”, “electrifying and infectious”, “diabolically unhinged and unpredictable”, “imperious and volcanic”, “delirious and explosive” — but we’ve also praised the well-structured nature of the songs and the band’s incorporation of other heavy metal ingredients to make the music even more attention-grabbing and contagious.

And so it’s a real pleasure to continue yelling about the band today, the occasion being our premiere of a track named “Drug of Choice” off the debut album. 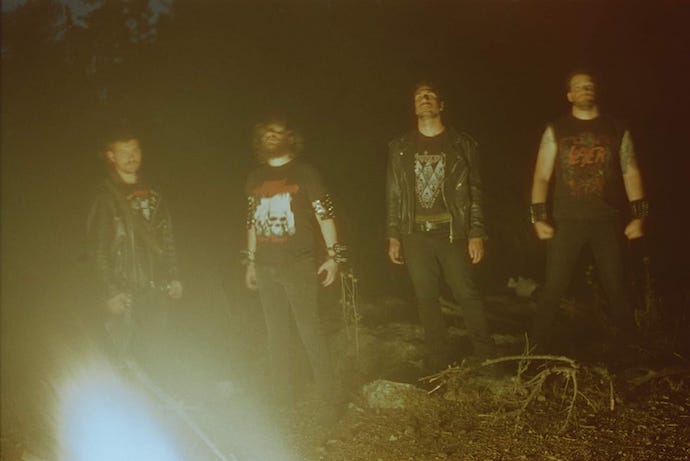 As this new song abundantly proves, all those previous descriptive phrases still hold true. Backed by booming, clobbering drums and gut-slugging bass lines, the slashing riffs in “Drug of Choice” are certifiably vicious, somehow both cold-hearted and deranged, while the array of screaming and roaring vocals are absolutely ferocious. The song builds in incendiary intensity, propelled there by a screaming guitar solo, increasingly crazed riffing, insane vocals, and heart-pounding drumwork.

With a clarity of production that increases the music’s flesh-cutting and bone-smashing impact, but without sacrificing its raw, primal power, the whole song gets the heart pounding and never relents, becoming a true extravaganza of flying fretwork and off-the-hook rhythms. It exerts a kind of savage primeval attraction for the listener’s reptile brain, with plenty of hooks within the mayhem, yet it takes more than one listen to really appreciate the dynamism of the ingredients.

The player below will also give you a chance to check out two other tracks from the album, “Witches” and “Spawn (of the infertile)” — and definitely give those a listen too.

Svpremacist describe Meaningless Death’s nihilistic thematic and lyrical foundation this way: “Death is an icon and reflection of your own panic of losing whatever it is you grasp on to in order to feel alive – your reeking pile of dogma and lies like spirituality, identity, and self. You are nothing!”

Meaningless Death was recorded and mixed by Gad Torrefranca at Polar + Alfa in Tel Aviv, and was mastered by TC at Forneus Studio. The cover art was created by Chilean artist Daniel Hermosilla (Nox Fragor Art). Repose Records will release it on 12″ vinyl, digipack CD, cassette tape, and digital formats. It’s recommended for fans of Vulcano, Possessed, and Massacra⁣.