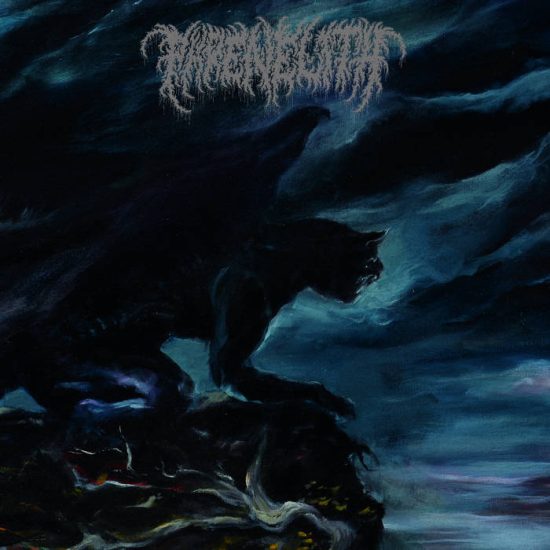 I experienced NCS anxiety again this morning. That’s what comes from having 84 open tabs on my computer for new songs and videos, all of which I opened just since last Saturday. Not lying — 84 of them! To increase the anxiety level, I hadn’t listened to any of them until this morning.

Of course, I didn’t listen to 84 music streams, some of which are complete albums and EPs that were released over the last week, nor to all the other songs on the long list of candidates that I’d made over previous weeks. I did add all 84 to that pre-existing list, so I could stare at the band names and try to figure out what to spend time on. I stared… made choices… and from those choices here’s what I decided to share:

Nice to have these Danish death metal heavyweights back, with a jaw-dropping song named “Awakening Titans“. That’s what the music sounds like too, mystical and ringing at first, and then furiously slaughtering, packed with electrifying drumwork, unhinged, venomous riffing, jolting grooves, gargantuan growls, and maddened howls.

The song is off Phrenelith’s new album Chimaera, eagerly awaited in these parts. It will be released by Nuclear Winter Records on December 10th. The great cover art is by Timo Ketola.

Mære return with a second EP after last year’s six-track debut, which my friend Andy reviewed here. The new EP consists of the title track “Think of Me as Fire” and a re-recording of “Descend” from the first EP. The former is a blazing burst of crazed dissonance whose unstable rhythms, rampant discordance, hostile drilling sensations, sledgehammer assaults, and sheer vocal hostility never let you get comfortable — but are damned fascinating. The latter is a descent into madness; if anything it’s even more scary and ingeniously unnerving.

I combined these two songs because both of them are included on the latest Milim Kashot compilation by Israel’s Machine Music. The complete line-up on the comp is fantastic (I’ll include all the names below), but these two songs are among the exclusives, and they are the first two tracks now up for streaming on Bandcamp.

Sleepwalker’s song “Валаам” is the kind of head-spinner you would come to expect if you’ve been following the music of this multi-national collaboration. Trying to map the course of this nearly 10-minute stunning excursion would be a challenge, and I won’t attempt it. I’ll just say that in all its exultant kaleidoscopic stylistic permutations, including sublime soloing which sounds like a union of trumpet, saxophone, and guitar in the midst of cataclysmic convulsions, I found it joyous.

Drune’s track “Fate’s Thirst“, is the second single from their upcoming debut full-length. It’s my first introduction to this band, and in its own way it’s as entrancing as Speedwalker’s track – though joyous isn’t the word I’d use for it. Even longer than Sleepwalker’s track (at 12 1/2 minutes), it has a primitive, primeval, and dangerous quality, with an atmosphere of mysticism that draws power from wailing shamanic vocals. It builds in power, triggering body-heaving reflexes and simultaneously scrambling cranial neurons with thick, vaporous sonic drugs, and enhancing the trance with beautiful, gleaming melody.

All of the proceeds will go to charity, with the money this year going to For the Wildlife animal sanctuary. For more info about this release, and to check out a fascinating interview of 夢遊病者, go here.

Next up I chose the official video for “The Oppressive Weight“, the second single from blackened hardcore ensemble Anti Ritual‘s debut album Expel The Leeches, which will be released by Indisciplinarian on October 29th. This one is a lightening storm of frenzied, anguished riffing, turbocharged drumming, and fiery screams — but the fluid, chiming melodies prove to be mesmerizing, even within a song of such furious assaulting impact. The video is fantastic to.

The next incredibly intense, mind-altering song is from the debut release of Lhaäd, which is the solo project of Filip Dupont. He is also a member of Hemelbestormer, Entartung, Rituals of the Dead Hand, and Wolven. You’ll understand why I put it right after that Anti Ritual track, because it too is an absolute lightning storm — all jet-propelled drum-hammering, berserker riffing capable of setting fire to dry forests, and attacking roars. The barbaric danger in the music is palpable, and so is its ability to get your adrenaline going in a flood.

Even when the momentum slows into a lurching march, it’s a dangerous beast, and the flickering wisps of unreal melody that rise up at that point are enthralling. It becomes sweeping in its scale, creating uplift, even if the excitement is harrowing to the core.

The name of the album is Below. It was mastered by Maurice De Jong, and it’s set for release by a multitude of labels on December 10th.

This very long-lasting band from St. Petersburg have a new album named Where Silence Dwells that’s due for release on December 10th, and the first single from the album is the next track I chose for today’s collection.

“Sorvali Cemetery” is an enthralling combination of styles and sensations, melding the ping of glistening notes with ghostly ambient emanations, body-slugging grooves with voracious growls, and singing that soars with dark, forlorn melody. The drumming and the bass will jar your spine and work your neck, and the cello melody casts a subline but sorrowful spell. The ceaseless ebb and flow of the music is part of its attraction; I wish it had gone on longer.

I think we managed to write nothing about Siniestro’s latest album Vortexx, which was released by Black Lodge Records in May of this year. We can’t cover everything worth hearing. But at least this new lyric video for “Blod eld död” from that album gives us a small chance to make amends.

I thought it would pair well with the preceding track in this collection, because it too is a multi-faceted collage of experiences. The sinuous principle guitar melody is a heart-breaking lament, but much of what’s around it is a jolting, viscerally powerful experience. The fiery vocals, which seamlessly move from gritty bellows to song, remind me of what I hear in many Slavic metal bands. There’s a folk influence in the song that makes it sound earthy and old, and the intense passion of this sad but defiant music shines through at every turn.

The next song, “Pahansuovat“, is the first advance track from this Finnish quintet’s newest release. The scratchy opening riff immediately sinks the mood into grievous despair, and then the song becomes a juggernaut of bone-breaking drums, earth-excavating chords, and no-holds-barred vocal intensity, as utterly shattering in their emotional intensity as the music is humongously heavy. This is music that makes me think of those times when life pushes you into very dark and cramped corners, scrabbling and screaming, with no way out.

Having said that, the song will put a match to your nerves, and its chiming guitar refrain sticks in the head too, despite how hopeless it is.

The name of the album is Valonaara, set for release on December 10.

You may or may not be pleased to know that Impending Doom haven’t evolved, at least not judging by this next song, which is a furious and merciless deathcore bludgeoner, a discharge of maniacal screams, murderous roars, and the kind of explosive percussive bombing that cause bridges to collapse. I’m not immune to nostalgia, and that has something to do with my choosing of this song and video; back in the hey-day of deathcore I got some electrifying thrills from Impending Doom shows.

“Satanic Panic” is from a new EP named Hellbent that will be available on January 12, 2022

The next video is a guitar playthrough by guitarist Zeyros from the Italian black metal band Velch, whose lineup includes members of Funeral Oration, Nerodia, Iblis, and Orgg, and ex-members of Doomraiser, Deviate Damaen, and Fleshgod Apocalypse. The song in the video, “1750“, is from Velch’s album Inter Sidera Versos, which will be released on October 30th (on tape via Wine and Fog Productions).

The song is absolutely gripping — thunderous in its momentum, and with riffing that’s somehow both desperate and fiery, hemmed in by daunting obstacles and violent in its resistance. Mayhem reins, but the music still pierces to the soul.

The next video is the first of two that include rabbit creatures — what are the odds? The video is kind of humorous in its depiction of a man in a sedate, well-manicured neighborhood apparently losing his mind to violent rage. The music’s not humorous though. It’s a furious expulsion of nihilistic metallic hardcore, racing and ravaging, clanging and clobbering, seething and slashing. Augmented with vocals of blinding, throat-ruining fury, it ends with a down-shifted segment that inflicts a grievous beating,

The cleverly named “Cult-De-Sac” comes from Burning Tongue‘s cleverly named album Prisoner’s Cinema, which is coming out on October 29th via Aqualamb. The band was formerly known as Blackest.

Here’s the second video to feature a rabbit creature, and the last item in today’s massive collection.

Your mileage may vary on this video, depending on how much you get out of a writhing half-naked man, a pretty black-clad woman wandering along a windswept seashore, a bloody-mouthed menace, and a human-sized rabbit playing the sax. I got good mileage out of the song, getting stuck in its big tribal beats and heavy throbbing bass, in its eerie, searing guitar radiations, its trippy saxophone accents, and its wailing vocals (which get increasingly venomous).

Teethgrynder is the solo project of visual artist and multi-instrumentalist Jay Thurley. The song in the video is from Teethgrynder’s fourth album, Hostages, set for release on October 29th via Isolation Records.

The album reportedly includes contributions by Jaye Jayle’s Evan Patterson and Daughters’ Alexis Marshall, as well as Bossk guitarist Robert Vaughan (who plays on the song below), visual artist and long-term collaborator Richey Beckett, Filth Is Eternal vocalist Lisa Mungo, Fall of Efrafa‘s Neil Kingsbury, “and maybe even David Yow of The Jesus Lizard“. A couple more songs from the album are streaming at Bandcamp.