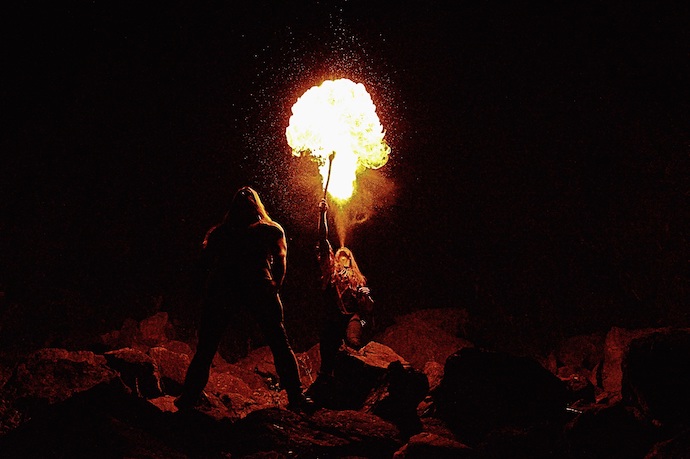 The fire-breathing band photo of Demonic Temple featured above hearkens back to ancient black metal days, to the fiery expulsions of Quorthon, Frost, and Abbath. Apart from linking arms with the vanguard of black metal’s second wave, the photo also serves as a mission statement for the music of this Polish duo, as revealed through their forthcoming third album, Through the Stars into the Abyss.

The sensations of the album are incendiary, but they also set fire to the imagination, creating both blood-freezing and blood-heating visions that seem both subterranean and celestial. Put differently, the trip through the album is very much what the album title portends — a dazzling but terrifying excursion through the stars above into the abyss beyond.

You will get a very good sense of this by listening to the album’s title track, which we’re premiering today in the lead-up to its November 11 release by Putrid Cult and Dark Horizon. 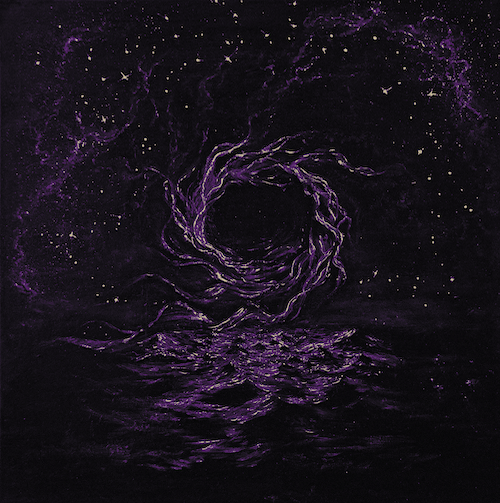 The eerie reverberations of the song’s opening riff lead the way into a blaze of furiously hammering drums, thundering bass, hideous snarls and screams, sky-surfing synths, and fiery chords that writhe like a great serpent. Wolfish howls rabidly bay at the moon within the midst of this electrifying conflagration of sound, which still radiates the atmosphere of the supernatural which the opening riff established. In its alien echoing tonalities and feverishly flickering leads, the music seems to levitate even as it relentlessly wrecks havoc.

There comes a point when the rhythm section quell their own rampant madness and begin a ceremonious march, but the vocals are still a riot of possession and madness, and the surrounding music continues to swirl and sear until all falls silent except for a collage of spectral sonic emanations that are both chilling and entrancing.

For more info about the album and how to acquire it, check the links below. Also below you’ll find a stream of the previously released album track “Night of Everlasting Fire“.

One Response to “AN NCS PREMIERE: DEMONIC TEMPLE — “THROUGH THE STARS INTO THE ABYSS””