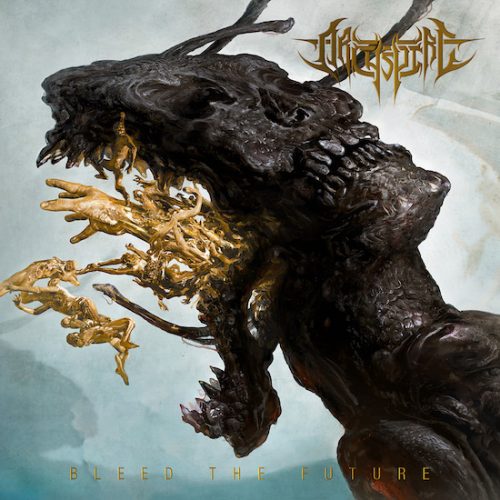 (Andy Synn takes up the challenge of reviewing the new album from Archspire, out 29 October )

I don’t know about you, but it seems more and more evident to me with each passing year that the current Tech Death scene has gotten itself caught up in a perpetual arms race of velocity and virtuosity.

And, sure, it can be a real thrill to witness bands continually pushing themselves, and pushing the envelope, in terms of how many notes per second and beats per minute they can crank out, but you know what happens when an arms race reaches its inevitable conclusion, right?

Thankfully, this particular scenario may not be quite as inevitable as it appears, as several of the genre’s leading lights seem to have realised that this constant competition over who can be the fastest, techiest, or shreddiest isn’t necessarily the healthiest way to live, and have already begun taking steps to ensure that when the bubble finally bursts – and it will – there will at least be a few bands left standing.

And I’d put money on Archspire being one of them.

Of course, following the, ahem, relentless success of their previous album I don’t think anyone would have been surprised if they’d simply recreated the exact same formula at an even higher tempo.

But, smartly, they haven’t done that.

Don’t get me wrong, Bleed the Future is still ridiculously, preposterously, fast, with both guitarists Dean Lamb and Tobi Morelli, and inhuman uber-drummer Spencer Prewitt, continuing to showcase why they’re considered some of the quickest, slickest, and sickest players around.

However, the more you listen to this album the more you’ll become aware that there’s only so much further, so much faster, that the band can push themselves at this point… something which it seems the Canadian quintet themselves have implicitly acknowledged by virtue of all the ways in which BtF attempts to subtly (and sometimes not-so-subtly) expand the scope of their sound.

Take, for example, the increased prevalence of stupidly chunky, ignorantly-infectious Tech-Slam parts which, while not entirely new to the group, play a much more prominent role in the band’s songwriting this time around, not only giving the listener some seriously beefy and bombastic hooks to sink their teeth into (and partially making up for the fact that there are, to my ears at least, fewer catchy, crowd-friendly vocal parts compared to their last album) but also increasing and expanding the record’s dynamic range in the process.

It’s the greater use of space and atmosphere, though – from the eerie, dreamlike interludes puncturing ear-worm opener “Drone Corpse Aviator”, or the moody mid-section of the titanic title-track, to the elegant instrumental introduction of “Drain of Incarnation” – which really shows how much more focus has been put into varying the flow and dynamic of this album when compared to their previous work(s).

And while it’s true that they’ve occasionally hinted at this sort of thing before now, the band have clearly dedicated significant more time (and effort) to exploring the quieter, moodier side of their identity than ever before on BtF (which is both pleasantly surprising and undeniably impressive when you consider that the songs here are, on average, slightly shorter, yet often more varied and versatile, than those on Relentless Mutation).

It’s also worth noting that by giving the music a little more room to breathe this time around, the band have allowed the album’s true MVP, bassist Jared Smith, space to really shine, and it’s his fluid, nimble-fingered fretwork on songs like “Abandon the Linear” and “Acrid Canon” that frequently steals the show!

Of course, Bleed the Future isn’t without its flaws (though I’m sure some of you won’t want to hear that).

For one thing, I’ve already mentioned that there are fewer real vocal hooks on this album than there were on its predecessor – “Drone Corpse Aviator” and “Bleed the Future” being the obvious exceptions – and while it’s true that singer Oli Aleron still spits out his lurid lyrics like a sonic sub-machine-gun, there’s definitely a few noticeable moments where the songs seem to be crying out for something a little bit more, or a little bit different, even though Aleron is already operating at max capacity (though, to be fair, the band do attempt to compensate for this sometimes with an extra dash of vocal layering).

And then there’s “A.U.M.”, which is not only a bit of an anti-climax following on from the excellent “Reverie on the Onyx” (which would have made for a much better closer) but which suffers from being stuck with a tiresome “comedy” intro (reminiscent of the worst late-90s Rap album “skits”) that, sadly, can’t be skipped (though it is, at least, thankfully pretty short).

Still, even with these minor issues (which may be of greater or lesser concern, depending on how you feel about such things) the big question is whether or not Bleed the Future is a better album than its predecessor, isn’t it?

Well, if you were to put a gun to my head I’d probably say that Relentless Mutation still has the edge… but only just, and there’s no question that BtF is definitely an ambitious step forward for the band all the same.

Not only that, but I’d say that the very fact that Archspire refused to settle for remaking the exact same record, even though that would, arguably, have been the easier path to take, is a sign that the future of the genre remains in very safe hands.

One Response to “ARCHSPIRE – BLEED THE FUTURE”