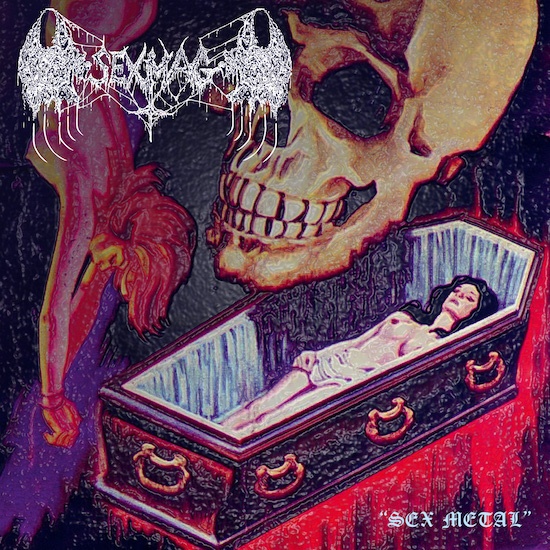 What’s in a name?

In the case of extreme metal bands, there has been a long tradition of names that invoke evil, violence, dark fantasy and mysticism, horror, nihilism, and of course death itself in all of its guises. The impact of such names as Slayer, Emperor, Immortal, Immolation, Suffocation, Darkthrone, Hellhammer, Entombed, Mayhem, Bloodbath, and of course Death (to pick just a few) has been long-lasting.

Of course, the tradition hasn’t been rigidly honored — for example, remember the “verb-the-name” formula that dominated at the height of deathcore? — but naming rites to this day still tend to signify something about musical inspirations, many of them continuing to reflect the transgressive nature of the music in serious and shuddering words.

Which brings us to SexMag. So what’s in a name? In the case of this band and their debut EP Sex Metal, more than you might guess. 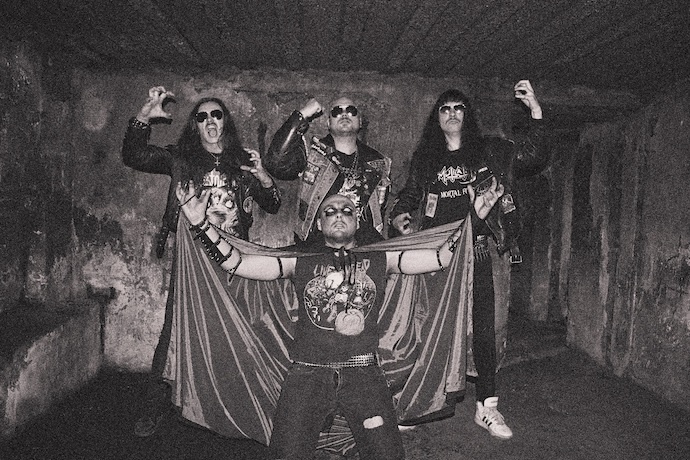 Seen in the context of extreme metal, the name invokes sleaze, sweat, and a fully charged libido, and of course there’s a tradition there as well, sometimes involving use of the word “goat” and images of them taking nuns from behind. But it’s a name that may not suggest “serious” music. Could the music just be a joke? Could it just be a sloppy party you quickly want to forget? You might be forgiven for assuming so — but you’d be wrong.

To be clear, SexMag are indeed nasty beasts, but their revels are rooted in hatred and Hell. Here’s their own preview of the Sex Metal EP:

“If you have a twisted mind, and are looking for the howling of the wolves, miasma straight from the cemetery, chanting at the moon and sex with Satan in music, [then] Sex Metal is the EP for you! Don’t expect any innovative, pseudo-philosophical hipster shit. You won’t find any joy and happiness either. This stuff is filled with venom and hatred towards anything that lives and represents the modern world. With our sound, we tried to create a portal to the ‘ancient metal cult and times of Bathory, Destruction, Sodom, and Sarcófago. Come through the portal and join us if you’re not afraid…”

Following a haunting yet seductive intro piece that features acoustic instrumentation, Sex Metal rips through six feral romps packed with scalding, sulphurous riffs, maniacal soloing, caustic and crazed vocals, and gut-punching beats that gallop, pound, spit bullets, and bounce of the walls. The fretwork is generally fast, and fast-changing, both slashing and reptilian, blazing and blaring, exotic and orgiastic. When things do briefly slow down (for example, in “WYSLANNIK HADESU” and “NAGROBEK KURTYZANY”), it’s for the purpose of introducing feelings of ghastly supernatural horror and dismal degradation.

The music is viscerally compulsive and manages to feel “loose” and almost wildly out of control, even though it’s quite clear that the musicians know what the hell they’re doing. It’s also true that the music is venomous and vicious — if this is a party, it’s one that leaves blood-spray on the walls as well as filth on the floors (and Satan cackling in the corner). It sounds like the band were having a shitload of deviant fun making this, and that feeling is contagious.

And with that, we invite you to revel in our full premiere stream of Sex Metal:

Sex Metal will be released by Dying Victims Productions on October 22nd in variant vinyl and CD editions, with download codes and other paraphernalia.

P.S. You should understand that SexMag are a Polish band, and that they reportedly chose their name in honor of an important old Polish heavy metal band called Kat (the Polish word for “executioner”), who recorded a song named “Mag-Sex”.