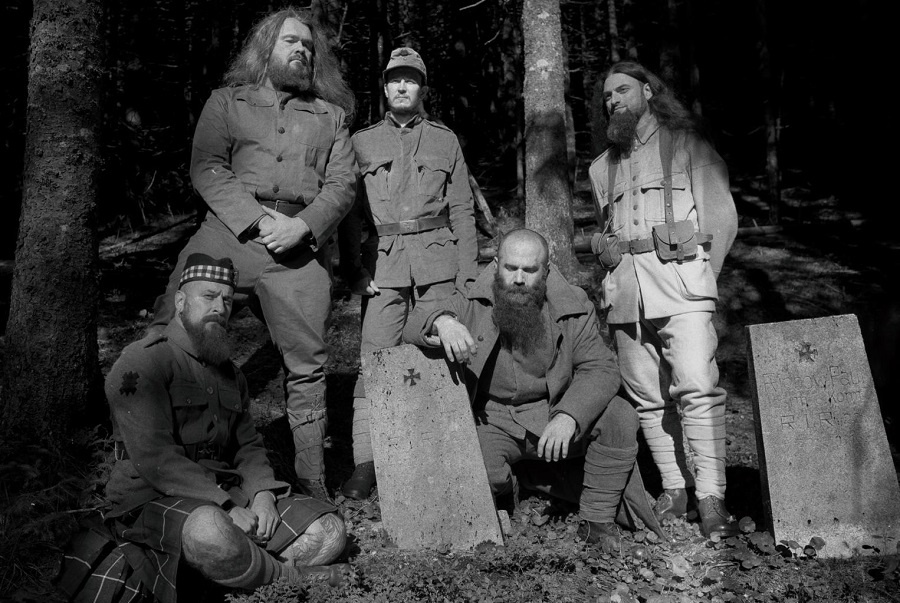 Let’s not beat around the bush, eh? Where Fear and Weapons Meet, the third album from Ukranian Blackened Death-dealers 1914 is one of the best albums of the year.

Maybe you’ve already heard it (after all, it came out last Friday) or maybe this article will be your first encounter with the band – either way, whether you’re a grizzled old veteran or a fresh-faced rookie, what you’re about to read will hopefully give you a good feel for the group’s distinct blend of blackened fury, deathly intensity, and doomy melody, as well as a greater appreciation for their dedication to, and dramatisation of, the many different faces and facets of “the war to end all wars”.

As the instantly-recognisable melodies of “It’s a Long Way to Tipperary” fade out the churning chug-a-thon of “Gasmasks” stomps its way onto the battlefield with imperious authority, providing your first experience of 1914’s bombastic blend of chunky Death Metal riffs, precise, pounding percussion, and ragged, rasping vocals, after which the mournful intro to “Frozen in Trenches” eventually gives way to a barrage of blistering blastbeats and writing distortion, interspersed with moments of moody melody and doomy desolation.

The mix of bleak, bone-chilling melodies and gloomy groove which makes up “Verdun” gives you a glimpse at yet another weapon in the band’s arsenal, swapping out the scathing speed and abrasive aggression of the preceding tracks for a slower and more sombre approach somewhere between Paradise Lost at their grimmest and Edge of Sanity at their gloomiest, which in turn leads into the God Dethroned-esque strains of “Caught in the Crossfire”, where the band duck and dodge between passages of blasting fury, grinding gloom, and melancholy melody like their lives depend on it.

“Zeppelin Raids” is another one whose titanic riffs and gigantic grooves owe as much to bands like Paradise Lost and My Dying Bride as they do Bolt Thrower and Benediction, albeit with a much more noticeably blackened edge, while “Ottoman Rise”, the record’s longest, most ambitious number, drops the doom-hammer even harder – its shadowy sound accentuated by the sort of majestic, menacing melody lines that Sulphur Aeon have become famous for – before bursting into frenzied life around the two-and-a-half minute mark, only to then descend even deeper into desolation during the song’s hypnotically heavy, second half.

“Arditi”, by contrast, is a much simpler and more straightforward piece of blast-driven, hook-laden Death Metal, heavy in both melody and riffs, while “Battlefield” leans more towards the doomier side of the group’s sound without sacrificing their deathly heft or moody melodic momentum in the process.

And as the closing strains of “The Last Long Mile” sink into the bullet-stained and blood-drenched darkness it becomes clear that while the battle may be over, the war is not yet done.

With the echoes of “Your King and Country Want You” still ringing in your ears, “Arrival. The Meuse-Argonne” explodes onto the scene in a storm of spitfire drumming, scything guitars, and raging vocals, immediately showcasing both the bigger, beefier production of the album and the increased intensity of the band themselves.

It’s not all fire and fury, however, as the group temper their frenzied assault with moments of morbid doom and an abundance of mournful lead melodies in a manner that instantly demonstrates how much they’ve improved as songwriters too.

This is even more obvious during “A7V Mephisto”, whose mix of dirge-like Death/Doom, gloomy, almost gothic melody, and searing blackened extremity is like some unholy (and unstoppable) combination of Septic Flesh at their doomiest, Moonspell at their heaviest, and Belphegor at their most intense.

And speaking of intense… “High Wood. 75 Acres of Hell” is easily one of the most unrelenting and unforgiving tracks the band have ever written, as once its scene-setting introduction has finished it absolutely does not let up until it has blasted, hammered, and ground you into the dirt, leaving the subsequent cover of “Beat the Bastards” (originally by The Exploited) to mop up any survivors.

The atmospheric, cinematic interlude of “Hanging on the Barbed Wire” provides a welcome respite from all the shellshock inducing savagery, before “Passchenhell” – which features both some gruesomely guttural guest vocals from the one and only Dave Ingram, as well as some seriously sinister, nerve-shredding stretches of violin – proceeds to crush you into dust over the course of seven stunningly severe minutes.

“C’est Mon Dernier Pigeon” sits somewhere between the scalding assault of Carcass and the suffocating grind of Apshyx, and serves as a killer showcase for just how dramatic, and dynamic, 1914 can be without sacrificing an ounce of heaviness or extremity in the process, while “Stoßtrupp” offers a much more straightforward, though no less effective, mix of grooving guitars, grumbling bass-lines, and gleaming melodies, to get your boiling.

It all climaxes with tremendous, ten-minute penultimate track “The Hundred Days Offensive”, where the band really let their most melodic inclinations take flight and soar, building from a haunting, semi-acoustic intro into a heroic, high-energy mid-section, before finally culminating in a magnificent, multi-layered finale designed to leave you worn out and wounded as the closing strains of “Pack Up Your Troubles in Your Old Kit-Bag” signal the end to yet another phase of the band’s auditory offensive.

Beginning with the sombre strains of “Tamo Daleko”, Where Fear and Weapons Meet wastes little time introducing you to the even more cinematic, symphonically enhanced, version of the band via the ominous orchestration and vicious blackened barrage of “FN .380 ACP#19074”, whose harrowing intensity is matched only by its seething array of insidiously infectious melodies.

Don’t worry though, 1914 haven’t gone full “Symphonic Death Metal” on us – which is a good thing because, let’s face it, there’s a tendency for the “Symphonic” bands to let the orchestral elements do all the heavy lifting, which most definitely isn’t the case here – they’ve just added another string to their bow, or another bullet to their clip, I should say, in order to better portray the grim gravity of their grandiose and gruesome subject matter, towards which they still clearly demonstrate a huge amount of respect (with many of these tracks drawing directly on true historical sources for their subject matter and content).

“Vimy Ridge (In Memory Of Filip Konowal)”, for example is a massive, doom-laden Death Metal monster – part Bolt Thrower, part Behemoth – with few, if any, symphonic accoutrements, that relies solely on heaving riffs and pulse-pounding drums to get its point across, while “Pillars Of Fire (The Battle Of Messines)” finds our heroes fully embracing their newly developed gift for dramatic orchestral embellishments in a manner reminiscent of Septic Flesh‘s classic (and never bettered) Communion, every sweeping string part and burst of brooding brass adding an extra dash of drama to the song without diverting your attention from the biting riffs, blasting drums, and visceral (and surprisingly varied) vocals which still make up the core of the band’s sound.

This sense of contrast, between the grandiose and the gruesome, really is at the heart of the album, in fact, as demonstrated by the curious (yet cathartic) pairing of the aggressive-yet-anthemic “Don’t Tread On Me (Harlem Hellfighters)” and the stripped-down acoustic-led interlude of “Coward”, the former sounding like an ongoing bayonet battle between Hail of Bullets and Necrophobic, the latter giving off some unexpectedly pensive, Panopticon-esque vibes, after which the mournful magnificence of “…And A Cross Now Marks His Place” leans into its obvious Paradise Lost comparisons with a growling guest appearance from Nick Holmes himself!

“Corps D’autos-Canons-Mitrailleuses (A.C.M)” – another major highlight on an album absolutely packed full of them – is a perfect example of how well the band have incorporated their more epic and cinematic sensibilities into the warp and weft of the album, using ostentatious layers of ominous orchestration to enhance both the morbid majesty of the song’s devastating Death-Doom parts and provide an eerie contrast to its passages of merciless, meat-grinding Death Metal madness.

With “Mit Gott Für König Und Vaterland” the group return to a more “classic” and unembellished version of their sound, delivering five furious minute of belt-fed, blast-driven Blackened Death Metal that doesn’t skimp on the vocal venom or the hell-forged hooks, before “The Green Fields of France”, as twisted and terrifying a cover as any you’re ever likely to hear, brings the whole thing to an absolutely crushing conclusion, with only the poignant, poetic sounds of “I Didn’t Raise My Boy To Be A Soldier” left to ring out forlornly in the aftermath.

You know what they say… war never changes… but 1914 most definitely have, and I doubt they’ve finished changing yet.