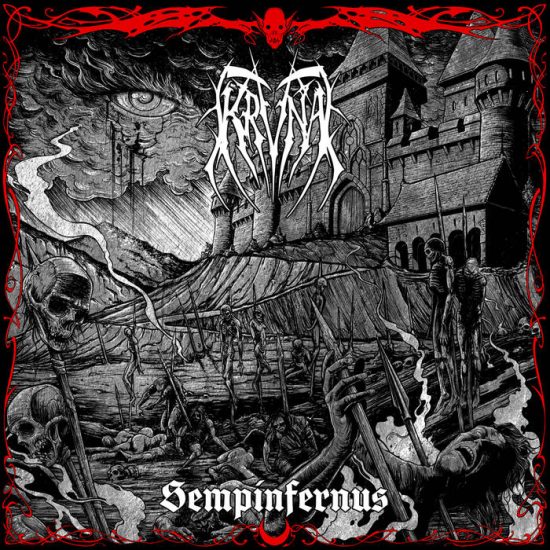 The Australian black metal band KRVNA made its recorded debut just last month with a debut demo consisting of two substantial tracks. Under the title Long Forgotten Relic it was released by Seance Records. In its lyrical themes, and through the visions of imagination spawned by the music, it explored the vampire mythos from the ancient world to Biblical times, and the black forests and mountainous castle crypts of Balkan and Carpathian incarnations of the vampire.

Now, following closely on the heels of that very promising advent, Seance Records is readying the release of KRVNA’s debut album Sempinfernus. It too delves into vampyric mythology but in an even more expansive and far-reaching way. Moreover, KRVNA’s solo creator Krvna Vatra has disclosed more precisely the nature of his interest in the subject matter, and how it stands for themes that extend beyond tales of the undead: 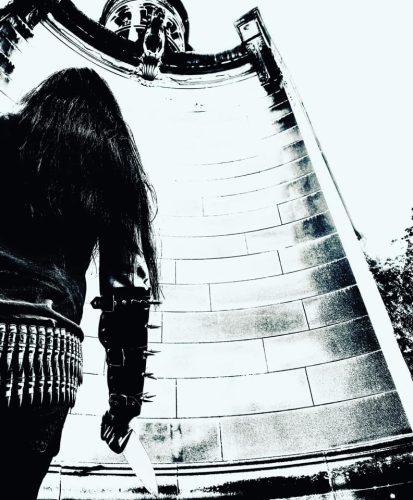 “The album is inspired by the folk stories and legends passed down through my family and countless generations. The album is conceptually sparked from a sentiment that is common amongst the village folk of where my mother’s family are from; they are Istro-Romanians, people who’d moved from Transylvania some 600 years ago to the Istrian peninsula and managed to keep their language and culture alive throughout most of the centuries.

“In turn, the premise is that, loosely, the advent and proliferation of utilities like electricity, street lights, modern creature comforts… ‘modernity’ etc… helped eradicate & dispel the concept of the ‘Striga,’ amongst many other superstitions – like a metaphorical ‘lighting up of the dark,’ so to speak. It signals a moving away from the ‘old ways’ – the superstitions, the witchcraft, tales of vampirism and the ‘old’ gods – being swept away by modernity, which, in contrast, to me is comparatively and seemingly soulless.

“So, this album very much was a way of harnessing the very utilities that helped diminish these superstitions and other darker aspects of ‘Balkan’ culture to, in fact, become a means of amplifying and drawing light to these old superstitions, once again.” 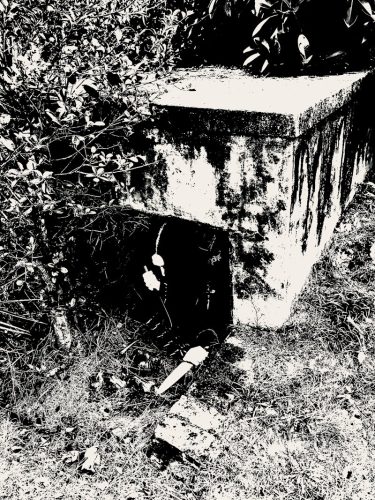 The music itself is a tremendous means of expressing these interests. It too is mythic and expansive, intensely immersive, and of course often a means of rekindling ancient terrors. Particularly through songs such as the one we’re premiering today, it has a transportive effect even as it seems to ignite everything in its path.

“Timeless… Ageless…” is the name of the song, and by now you can understand what that title means. For most of the song the experience is one of extreme turbulence and blazing delirium on a grand scale. Grim chords, ritual drums, and frenzied riffing (which radiates an electrifying incandescence) provide the overture, and then the sound becomes a conflagration. The drums maniacally race, and the guitars generate a dense cascade of searing intensity, coupled with unchained shrieking vocals of equal intensity.

A deeper riff undulates through the blaze like some massive serpent, with an impact you can feel in your chest, and timpani-like booms crash through the crazed percussive assault. The combined effect is absolutely exhilarating, though there’s something about the music that’s both deeply menacing and feverishly anguished.

Eventually the storm abates, and the song switches to a stately rhythm. Even as the riffing and the insane vocals begin to sear the senses again, the music rings with the dazzling sound of clarions, like the peal of bells rising in grandeur over the snap and boom of the drums.

Seance Records has set November 26th as the release date for Sempinfernus, and pre-orders in multiple formats are available now.

One Response to “AN NCS PREMIERE: KRVNA — “TIMELESS… AGELESS…””