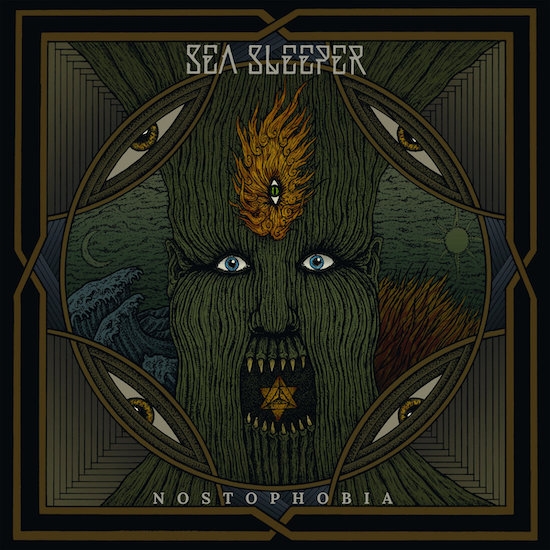 Many of us have had the misfortune of dealing with funeral homes after the passing of a family member (I’ve had to do that more times than I want to remember). There must be exceptions, but in general it’s an unpleasant experience, partly because of the grief that clouds it but also because of the feeling that behind their solemn and sympathetic countenance the directors are preying upon that grief, to turn it into coffin sales, flowery bouquets, and ultimately profit for their businesses. The unspoken sub-text is that what you spend is a measure of your love for the departed.

That kind of experience forms the lyrical theme of Sea Sleeper‘s song “Coffin Salesman” — though the theme stands as a metaphor for larger and even more insidious aspects of our societies. The track appears on this Portland band’s eye-opening debut album Nostophobia, an album that was originally released on CD and digital formats this past February by Metal Assault Records and is now headed for a November 5 vinyl release by the same label.

“Coffin Salesman” is the subject a mind-boggling new video we’re presenting today, which is appropriate, because the song is mind-boggling too. 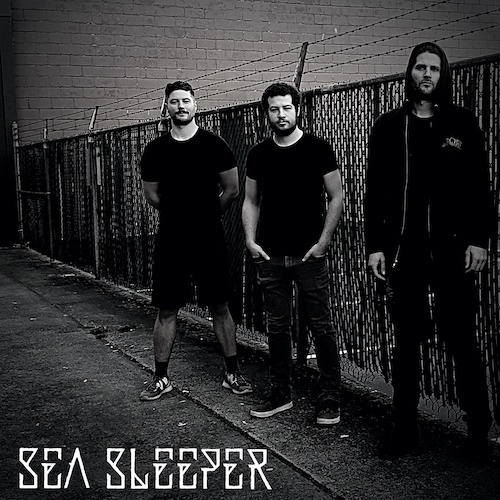 For most of its duration, “Coffin Salesman” is a musical madhouse that seems bent on violently tearing itself (and the listener) apart at the seams. The recurrence of thudding low-end crowbar attacks is partly responsible for why the music doesn’t completely careen out of control, and in addition to those explosive grooves a couple more close listens will reveal other organizing methods to the madness. But at first blush, it’s just insane.

The drum patterns and tempos change frequently and rapidly, and around the mutating percussive assaults everything else seems to be almost maniacally free-form in its abundant high-powered intricacy. The guitars spasm and squeal, eject waves of searing abrasion, blare like mangled trumpets, skitter like ant swarms, create eerie haunting wails, fall silent, and slither like pythons. And while doing this the music generates changing moods of derangement, fury, disgust, and despair.

Meanwhile, the vocals are frighteningly unhinged — a screaming and howling blast of violent rage — even though the lyrics are spoken through the mind of a funeral home director trying to sell the bereaved on his expensive embellishment for the dead.

Near the end the mood of the song changes again — dramatically — delivering a crestfallen melody and soulful singing with a mournful mien.

The accompanying video is just as wild as the music — but carries with it those larger themes we mentioned at the outset. The band explain: “The song is about the underbelly of desire and how low the human will go for self-interest and gain. The metaphor in the song was the sales of coffins, the metaphor in the video is the sale of the world“.

Nostophobia as a whole is as unpredictable, as genre-bending, and as electrifying as this song is, and if you haven’t devoted serious attention to it, it’s high time you did. You’ll find a complete stream below, along with links that will enable you to pick up the new vinyl edition, or other formats as you may prefer.

We’re also happy to report that despite pandemic turmoils Sea Sleeper are hard at work on their second album.