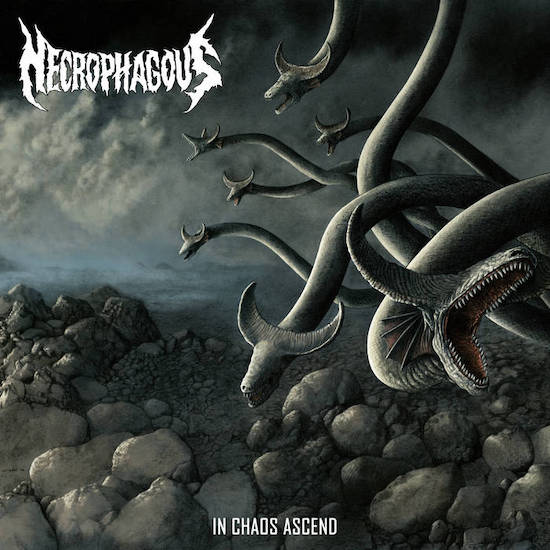 The Swedish death metal band Necrophagous boasts a line-up whose members have spent time in Visceral Bleeding and Entrails, and those pedigrees provide clues to the music encompassed by their debut album In Chaos Ascend, which is set for release by Transcending Obscurity Records on January 7, 2022. It has an old school flavor — flavors of Morbid Angel and Dying Fetus, of Deicide and Cannibal Corpse, of Suffocation and Revulsion. The music is undeniably vicious, but also packed with contagious riffs and compulsive grooves.

What we have for you today is a stream of “Wolf Mother“, the third single released from the album so far. As you’ll soon discover, it’s an exercise in high-powered, high-speed hostility and flesh-stripping derangement, which ends with a devolution into grisly moods of degradation and decay. 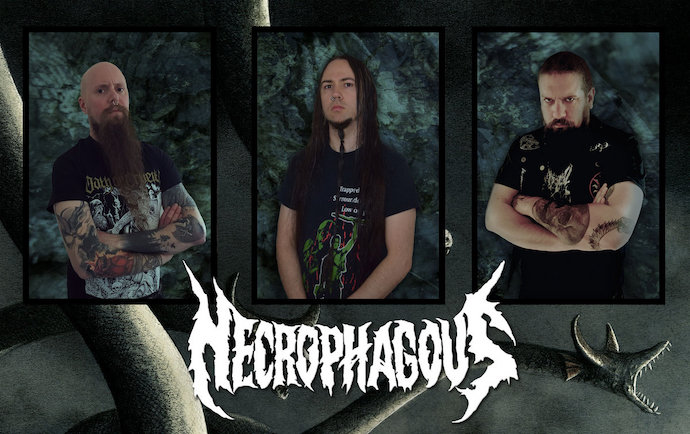 The song throbs with a multitude of livid pulsations, from the blaring opening riff backed by a fusillade of bullet-spitting drums to the rapidly jolting percussive riff and methodical neck-cracking beat that trades places with it. The hurtling grooves in the song are damned compulsive, and the savagery in the attack is amplified by voracious growls and maniacal leonine howls.

But as forecast, the riffing changes to a feverish demented swarm, redolent of rampant pestilence and oozing misery before the fiery throb of the music resumes. And as further forecast, there’s a breakdown at the end that’s both gruesome and hopeless. And of course, on top of all that, “Wolf Mother” turns out to be fiendishly catchy.

The cover art was created by Mattias Frisk (Ghost, Vanhelgd), and it adorns the multitude of formats in which Transcending Obscurity will release the album, and the apparel that accompanies it.

Check out the options via the links below, and also make sure to imbibe the two previously released songs, “In Chaos, Ascend” and “Order of the Lion“.