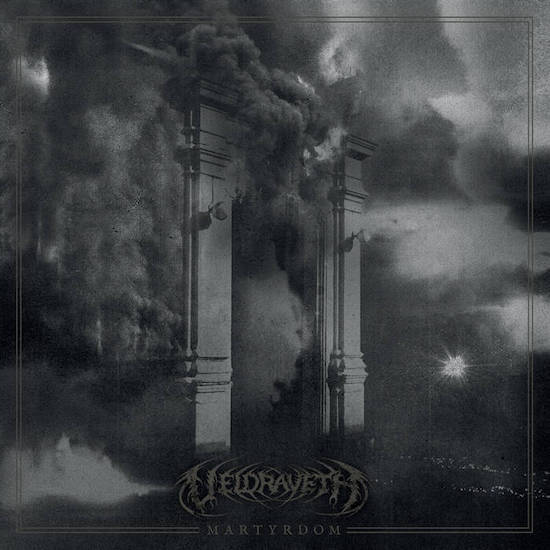 The Venezuelan black/death band Veldraveth have now reached their twentieth year of existence, and they commemorate the landmark with a new album, their fourth, which bears the name Martyrdom. It bears the hallmarks of experience and the spirit of ambition, generating visceral assaulting power but also elaborately creating a range of atmospheres that chill the skin and entrance the mind.

Martyrdom has been set for co-release by GrimmDistribution with More Hate Productions and Kuyen Producciones on November 29th. They recommend it for fans of Aosoth, Sinmara, Svartidauði, Mgła, Uada, Weapon, Antaeus, Cherontas, Abigor, Nightbringer, and The Ruins of Beverast.

Those are good references for what Veldraveth have achieved on Martyrdom, but an even better clue is the song we’re premiering today — “On The Precipice Of Enlightment“.

It’s a captivating song, one that blends blazing fury and mystical allure, moods of wild possession and bleak, downfallen bitterness, and with a sound that rings but is still gritty and rough to the touch.

The sorcery in the music comes through in the stately and sinister opening, and the fire-brand violence breaks out soon after, in gales of jittering, seething, blaring riffage, and vibrantly swirling leads, with potent double-bass turbulence providing the propulsion.

Vocalist Vel possesses a remarkably savage voice, with a range that rises in spine-tingling fashion, just as the music accelerates into a maelstrom of withering chaos. But those moments of downfall also lie ahead, in clanging and moaning chords that convey gloom and grief, especially when the drums fall silent. Here too is when the black spell beckons again, an enchantment of desolation — broken by one last rush of frenzied discord.

You’ll find pre-order info below, as well as a stream of the first-released single from the album, “Unseen, Unlight, Impure“.