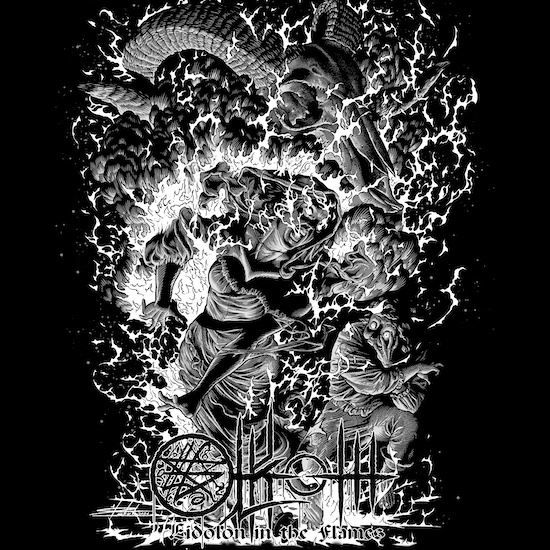 Metal-Archives harbors a couple of U.S. bands named Olkoth. The one that’s releasing the song we’re about to premiere was formed in 2016 by Zach Jeter and Vance Jeffcoat (RIP 1981-2017) in Columbia, South Carolina, and now includes a four-person line-up that we’ll name later.

Olkoth have a three-song 2019 demo to their credit, and now this new single, which provides a preview of a new album that’s been in progress since 2020. The name of this new song is “Eidolon in the Flames“, and it’s a discharge of brutal, blackened technical death metal that will take your breath away. 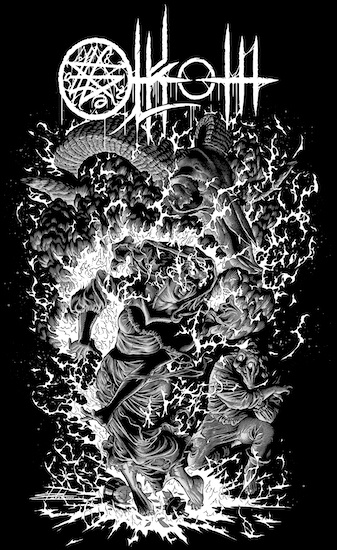 Prepare to be teleported into a conflagration, wrapped within a thunderstorm, with howling beasts and crazed demons as your companions. It’s an exercise in fury and fear, technically breathtaking and turbocharged almost from beginning to end, both demolishing and mind-bending.

The guitars are indeed maniacal — relentlessly writhing, darting, skittering, slashing, and screaming like sirens. Yet as berserk and frequently dissonant as they are, they also channel changing moods, from violent lunacy to frenzies of desolating helplessness, as if rapidly switching between predator and prey.

To cap off this mad and malicious escapade, the vocals provide a bonfire of feral howling, crazed screams, and wild wailing yells. Get your adrenaline charged up now:

This new single will soon be available for download at Bandcamp via the link below. Follow Olkoth on Facebook to stay abreast of developments concerning their new album.