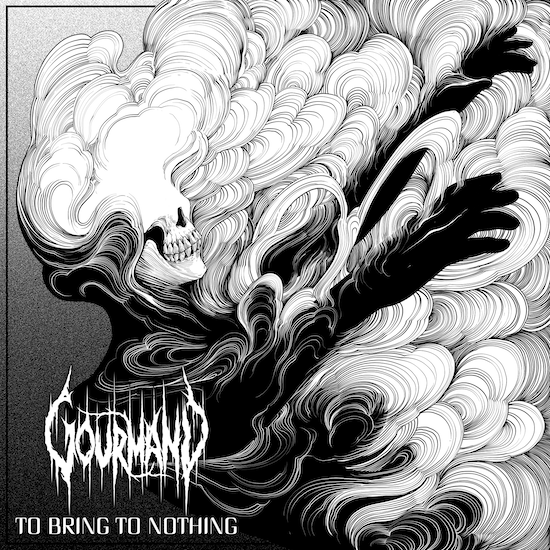 Gourmand‘s new EP To Bring To Nothing is the kind of thing that demands to be heard repeatedly, in part because the experience is so electrifying and frequently head-hooking, but also because there’s so much to unpack. Every one of the three songs is so intricate and so surprising in its rapidly mutating configurations that it’s almost too much for the normal human mind to assimilate in just one run-through. And it’s such a kaleidoscopic rush that even after repeated listens it still sounds new — because the odds are you’ll detect something (or many things) for the first time that you missed before.

“Progressive death metal” might the closest genre label for what this collective from Kansas City, Missouri have created here, though the technical exuberance of the execution and the labyrinthine compositional approach suggests a more multi-hyphened hybrid. As their name implies, they are connoisseurs of many tastes. The music is certifiably savage, but also remarkably elaborate (and pleasingly groovesome just when you think you’ve become thoroughly discombobulated). 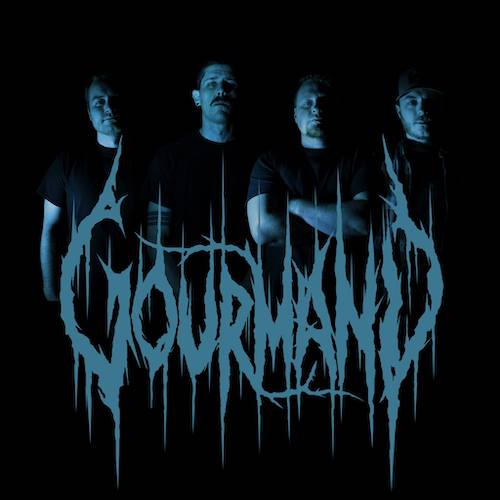 The entire affair runs just shy of 14 minutes, but you probably couldn’t tell how long it is if you didn’t know that. It would be an amusing game to play it for people without any kind of timer and then ask the listeners to guess at the length. Which is a way of trying to explain how irresistible it is to follow along all the rapidly branching and veering pathways, eyes wide and jaw hanging open, losing track of time.

The music delivers maniacal fretwork escapades, generating sensations of skittering and blaring insanity, but is just as likely to create morbid and menacing emanations of sound, or strange unearthly cascades that bring into play the eerie reverberations of a piano or the mournful and ghostly tones of a cello. Dissonance and discord reign at times, and at other times the guitars scissor like a fiendish sewing machine, scream like tormented banshees, or swirl like something in an alchemist’s cauldron.

The core group of Gourmand are complemented on the EP by a truly stunning session drum performance by Trynt Kelly (Unmerciful, Marasmus), who seems to have perfectly understood what the rest of the band were trying to do. With a less adventurous band, he might have stolen the show, but with Gourmand he is joined by lots of other scene-stealers, all working together in harness so that their combined efforts are what count.

The vocals collectively contributed by three of the band members are almost as wide-ranging as the instrumentation (including a great demonstration of how bestial howls can sound like singing), but are perhaps the biggest source of savagery in the music. And as mentioned earlier, just when you think your head is going to spin off into space trying to keep pace with all the tempo changes and all the cavorting, careening, and sinister maneuvers, the band will lock into grooving patterns that immediately trigger body movement (though those moments also give Kelly a chance to cut loose with some very cool fills).

Well, to avoid the risk of having this review take longer to read than it will take you to hear the EP, we’ll stop now and turn you over to a truly wild, thrilling, and mentally engrossing experience:

“We feel this is the most mature material we have put out to date. Change was inevitable with this release. Not only because we had our first lineup change since our inception, but also because we have grown a lot personally and in musical taste since our earlier days. The sound on To Bring To Nothing is more aggressive, darker, and definitely faster, and we are embracing these elements in our sound as we lean into our death metal roots. Although our progressive tendencies took a back seat on this EP we still wanted to incorporate the melodic sound that has shaped us from the beginning which can be heard in every song, even if it’s less than our previous records. We think this release will represent the closing of a chapter and introduce a new sound that incorporates both our traditional and progressive identities to the fullest extent.”

To Bring To Nothing was recorded, mixed, and mastered by Axel Harvey Productions, and it includes terrific cover art by Iannocent. It will be released on November 26th on all streaming platforms. Keep an eye on the locations linked below for more info.