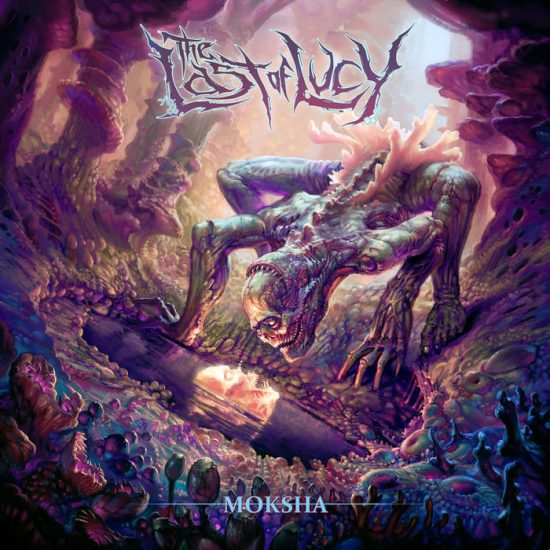 The cover art created by Par Olofsson for Moksha, the new album by the technical death metal band The Last of Lucy, is an immediately arresting and disturbing vision, grotesquely alien and yet fascinating and formative of intrigue.

In those respects it turns out to be a fitting adornment to the new album, whose music the band have refined into an extremely vicious, often unearthly, yet undeniably captivating sonic creature. And much like the cover art, the music is also elaborate in its creation of menace and mayhem, and far from commonplace — as you’ll discover in our premiere of an album track named “Temple of Rati“. 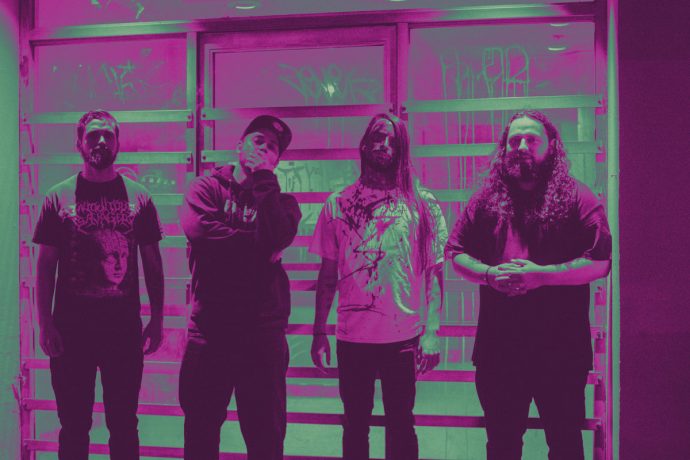 The Font of All Human Knowledge tells us that moksha “is a term in Hinduism, Buddhism, Jainism and Sikhism for various forms of emancipation, enlightenment, liberation, and release. It refers to freedom from dukkha and saṃsāra, the cycle of death and rebirth, by knowledge of the true self, the lack of a permanent essence, and the release from craving and clinging to passions and the mundane mind”.

The same source tells us that “Rati is the Hindu goddess of love, carnal desire, lust, passion and sexual pleasure.” The song we’re presenting may have been named for the temple of that goddess long after the music was created, yet there’s something about the music that does conjure visions of lust, albeit in a form that feels like destructive delirium.

The madness in the music comes through in the dual-toned vocals, a tandem of savage, gravel-throated howls and searing, hair-on-fire screams, as well as in the frenzied riffing, which discharges a crazed high-speed (and alien) carnival of skittering, swirling, and pulsating tones that veer into dissonance, and in the frantic percussive fusillades.

Yet there’s also a desperate and deleterious feeling in those rapidly morphing sounds, and in the neck-slugging grooves that surface. Even the scintillating guitar solo, which has an unearthly, exotic resonance, feels both seductive and dangerous. It all combines to make the song stick in the head, even though it’s an unsettling kind of mental spike.

Transcending Obscurity will begin releasing the album on February 18, 2022, on LP vinyl, CD, and digital formats (with apparel) and recommends it for fans of Inferi, The Faceless, Archspire, The Zenith Passage, and Godless Truth.

And… since we’ve already set your head spinning with today’s premiere, we’ll give you a chance to keep it rotating and levitating with streams of two previously released tracks from Moksha, “The Demiurge” and the album’s title track.

THE LAST OF LUCY:
https://facebook.com/thelastoflucyofficial