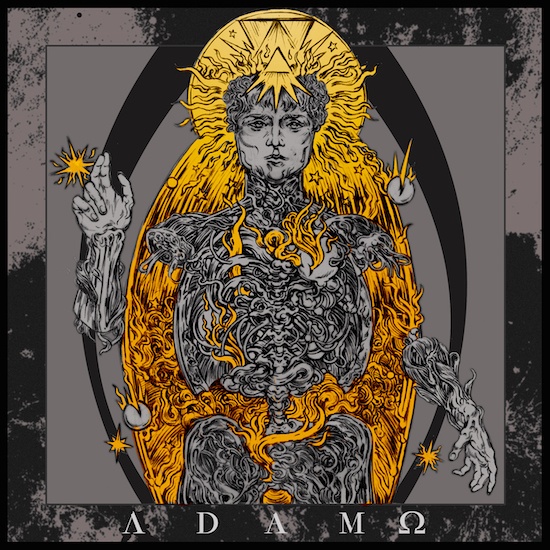 I was unfamiliar with the previous recordings of the Italian band REJEKTS, but experienced a reflexive thrill when I read that their new album Adamo embraces “grindcore, black metal and more”. Blackened grindcore, when done well, usually gets my motor running, but it turns out that perhaps the most meaningful part of that quoted PR passage is the part that says “and more”.

The lyrical themes of REJEKTS are politically charged, in keeping with their punk and grindcore ethos, and on Adamo they do indeed strike with black-metal bursts of blasting drums, grim and cutting tremolo’d riffs, and shrieking vocal intensity. But yes, there’s more going on here — a lot more.

Unlike standard grindcore, the songs are elaborate and constantly surprising, fueled with gripping mood-changing melodies, and as devoted to the creation of harrowing “atmosphere” (for want of a better word) as they are to pushing a listener’s adrenaline into overdrive. The album experience is disturbing, but absolutely riveting from start to finish. And thus we take great pleasure in presenting a full stream in advance of its rapidly approaching December 3rd release by Slaughterhouse Records. 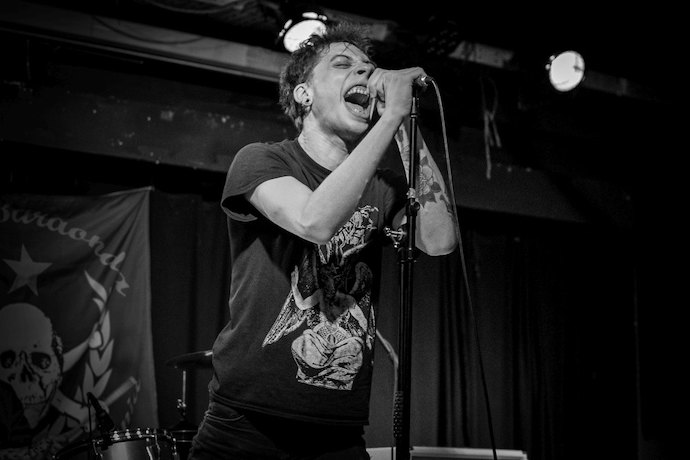 REJEKTS‘ punk and grind DNA runs through the song lengths, half of which are in the compact 2-3 minute range, but on the other hand the album includes a whopping 14 tracks and the first two of them exceed 4 minutes.

The first of those, “Samsara“, quickly pushes you out of your comfort zone with eerie astral electronics, spooky keys, and the kind of severe blackened shrieking that traumatizes ear drums and minds. It’s a chilling, unearthly, and unnerving experience, a frightening hallucination that’s bereft of drums and riffs and may leave you wondering where the grindcore went to.

The second of those longer-than-average opening tracks, “L’Astro Del Mattino“, builds on the atmosphere established by the opener. The pump of the drums and the thrust of the bass are present and accounted for, but the twisted guitar reverberations and dissonant accents add to the feeling of otherworldly peril, and the vocals race for your throat just as abrasively and intensely as in the album opener. The guitars become a boiling miasma that’s poisonous and dismal. Everything accelerates into frenzy, a storm of sound that’s electrifying but also terrifying, and the peal of the notes continues to signal desolation in penetrating fashion.

And thus right out of the starting gate REJEKTS establish themselves as an unusual creative formation, much more multi-faceted and intricate in their compositions than you might expect from their “blackened grindcore” moniker, and as attuned to atmosphere as to the visceral impact of ripping assaults. Indeed, more than once the label “post-black-metal” sprung to mind in listening.

To be sure, they do demonstrate a talent for ripping and ravaging across the following dozen tracks, inflicting fusillades of hammering and blasting drums, hurtling bass, scything fretwork, and scalding screams (accompanied by guttural roars and inflamed yells). Yet the songs continue to be fueled by a powerful fear factor as the band infiltrate their outbursts with blaring and screaming chords and echoing dissonance that create harrowing tension and feelings of dread and dismay, as well as streams of haunting melody that sound other-dimensional.

REJEKTS also repeatedly prove themselves capable of creating sensations of bleak, towering grandeur and imposing menace, as well as soundscapes of crippling downfall. They also repeatedly shove you off balance, changing tempos and moods without warning as they plumb immersive depths of emotional darkness that range from fury to despair, from regret and yearning to incurable derangement.

Among the surprises, they also create moments of sorrowful or scintillating mesmerization (as in the openings of “Come La Tempesta E L’Uragano” and “Tages“, which borrow from post-metal). And of course you’ll get doses of raking punk riffs too, though maybe not as many as you might expect. Throughout these far-ranging trips they preserve a prominent place for the bass, which makes a persistently nuanced and intriguing contribution.

In a nutshell, Adamo is continually fascinating. It feeds fires to the point of blazing intensity, but is far, far more than a fire-starter or a sequence of feral attacks. The album is undeniably disconcerting but also powerfully captivating, not one you’ll be tempted to let go of before it reaches its haunting conclusion. It’s certainly one I won’t soon forget.

Adamo was recorded and mixed by producer Carlo Altobelli at Toxic Basement Studios (CRIPPLE BASTARDS, INSANITY ALERT, EKPYROSIS) in Italy. The striking cover artwork is by Raffaele Salzillo. It’s recommended for fans of Full Of Hell, The Secret, and Implore.