While everyone else was enjoying their holiday here in the States and those of us who worked retail dreaded the following day, your reviewer here was waiting patiently for that dreaded following day as well. Not because there was some innate urge to go trample someone in the charge to catch not only a potentially deadly disease but also a deal on a TV, but because that Friday also delivered to us an absolute bludgeoning of new releases to listen to. What this also provided was a fantastic case of genre-whiplash as Voices, In Mourning, and today’s subject Lock Up would also release their newest additions to their collective works.

The Dregs Of Hades is Lock Up‘s fifth full-length release in a pretty long career, but one that has seen newer releases becoming far more frequent than the gaps left between their second and third albums. It also has some new additions to the group. Notably, Nick Barker and his fantastic neverending drum fills have bowed out and Misery Index/Pig Destroyer drum-kit annihilator Adam Jarvis is in. Also, one of the changes that equally grabbed press was the return of Tomas Lindberg back into the fold on vocals – tag-teaming alongside Brutal Truth’s Kevin Sharp for an interesting hardcore punk tinge of gang shouts and dual-pronged vocal attacks to the group’s constantly hair-on-fire style of grind music. 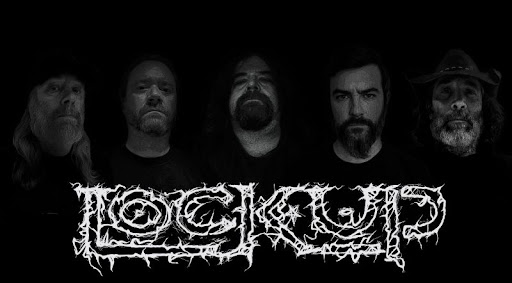 However, if there was any concern that the band might shift massively in style – which, given that the first taste of their current form was in the band’s unexpected “Inside Cthulhu’s Eye” single that came with the 2021 vinyl reissue of 2005’s Play Fast Or Die – Live in Japan release, shouldn’t really have been one – those can be checked at the door, because Lock Up instead play to all of their strengths and even return to some of the more maniacally driven chainsaw death metal that was worming its way around the edges of Necropolis Transparent all the way back in 2011. No wonder they’ve returned to the red-all-over cover art style again.

The Dregs of Hades is one of those albums that combines many of the elements of the discs prior to it. Like a diamond branching story path with Necropolis Transparent being on one end and Demonization being on the other, The Dregs Of Heades drags them together into a monstrosity all its own making, and one apparently worthy enough that the band felt justified in throwing a minute and a half scene-setting instrumental right up front to lead off the events before Kool-Aid manning themselves onto the scene with the disc’s first song “Hell Will Plague The Ruins”.

Immediately you get every member of the band all-at-once within that song including both of the aforementioned vocalists trading off lines and the whole thing devolving into musical mayhem. “Hell Will Plague The Ruins” is the blueprint song for this release and it is one that the band then repeat throughout The Dregs Of Hades. They keep songs right around the two-to-three minute mark and if they dare commit the sin of going past that then they really go for it, as album closer “Crucifixion Of Distorted Existence” clocks in at a weighty six minutes, though that is one where the entire thing isn’t being written as some sort of grindcore epic.

Lock Up‘s dual-vocalist approach is an interesting addition to their sound. Shane Embury and Anton Reisenegger keep things rolling on the bass and guitar front, happily ripping pages out of Lock Up‘s past as well as the grind riff playbook as a whole. They make sure things move as quickly as possible too, keeping with Lock Up‘s overall theme of being as abrasively aggressive as they can get. In fact, one of the few times where they slow things down in “Black Illumination” for one of the more blatant pit riffs out there, happens so suddenly that it feels like a separate song from the initial assault prior to it.

With those two serving as a firm foundation for the band’s sound, Kevin Sharp and Tomas Lindberg both focus on aural beatings for the entirety of Dregs Of Hades. Sometimes you wind up with one being much more prominent than the other, but through the thirteen songs present here you get a pretty equal amount of both those dudes screaming their heads off at you. In the case of “Dark Force Of Conviction” and Kevin’s delivery on that song that title might feel almost literal. The first three songs on Dregs Of Hades were clearly too focused and surgical in their attack, so “Dark Force Of Conviction” gets to be the song that spins people around until limbs start flying off.

As always, or at least if we’re lucky, there will be some pleasant surprises lying in the latter parts of an album’s release, and The Dregs Of Hades has a few of those when it isn’t overly pre-occupied with tossing people in front of the musical bulldozer. “Dead Legions” has a stupidly fun moshing segment that makes up the back-half of the song that could honestly make people bounce around if they were able to keep up with the band’s pace.

Follower “Triumph of The Grotesque” keeps that feeling going by breaking out the d-beat riffage and for the brief moment – literally, a minute and fifteen seconds – before that when it becomes the Lock Up-patented furnace-melter and back, could almost have At The Gate‘s “The Chasm” overlaid on top of it. We’re suckers for a solid rolling double-bass drum, though, so even if the circle-pit format is recognizable you better believe there was still temptation to get up and run around assuming we still have feeling in our lower extremities after all the sitting around we’ve been up to.

Despite having some pretty hefty names added (back) into the grind stalwarts’ lineup, Lock Up‘s newest disc still sounds a whole fucking lot like Lock Up. The band have made their trade in a style of death and grind hybridization that is about as close to listening to someone sharpen a knife on a wheel as you can get, and they don’t shift too far from it. There’s definitely a clearer punk influence to it with the dual vocal attack, and that’s something that could be expected, given that Shane Embury and his cohorts in Napalm Death had a lot of hardcore-punk influence bleed into 2020’s Throes Of Joy In The Jaws Of Defeatism.

That is also just as equally played as being the band in an absolute fit of insanity at times. Giving Adam Jarvis any opportunity to just hammer away at a kit is also a bonus, and The Dregs Of Hades presents plenty of opportunities on that front as well.

The four years between releases seem to have hardened Lock Up in their style. Whereas many bands would take that time to play with a whole bunch of differing ideas and outside influences, it seems Lock Up‘s approach was to try and smash Demonization and Necropolis Transparent into some sort of impact event and present whatever formed out of it as their new release. The result, outside of the doomier experimentation of that last song, still turns out to sound a fucking ton like the sort of infernal deathgrind Lock Up are masters of. So if you’ve needed another ‘belt sander to the face until they hit bone’ style of album then Lock Up are more than happy to provide.