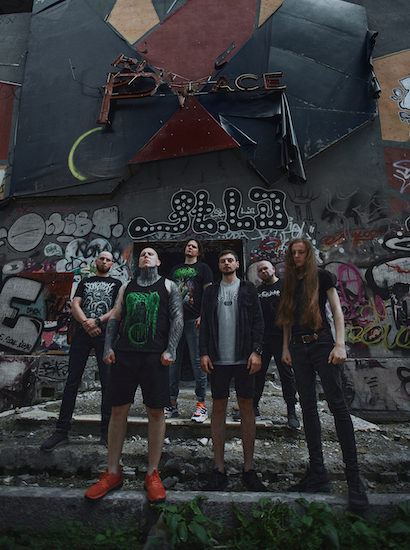 In September of this waning year the Italian label Lethal Scissor Records released a debut EP named The Origin by the Ukrainian extremists Lieweaver. The band first began to coalesce in October 2018 through the union of vocalist Vasiliy Kutsenko, guitarist Alex Choopov, and drummer Bogdan Fesenko. Soon, guitarist Alex Reshetnuk joined the group, and together they released a a debut single, “Paradox Of Creation“. A few months later bassist Bogdan Khoroshilov joined the band, and in February 2021 Ruslan Kovtun (keys/synth) completed the line-up for the recording of The Origin.

What we have for you today is a playthrough video for the EP’s closing track, “Obsessed With Purity“, and it features the talents of guitarists Choopov and Reshetnuk and bassist Khoroshilov. Watching them execute their missions within “Obsessed With Purity” is a fascinating thing to see, and the music has its own fascinations — in addition to delivering a bludgeoning beating. 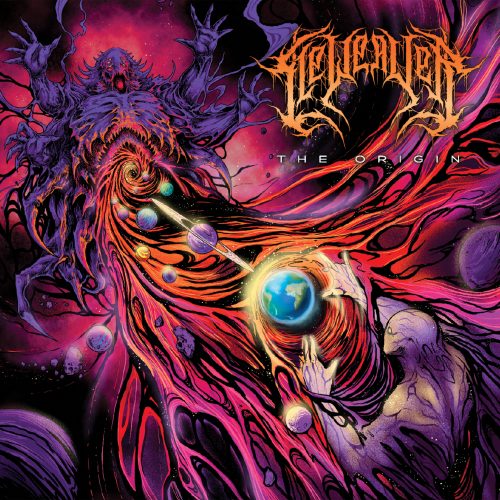 The song sits somewhere near the crossroads of technical death metal, brutal death metal, and deathcore (but closer to the brutal corner of the intersection), and it also generates an eerie and alien atmosphere. The song’s most brutish aspects surface when the guitarists and bassist synchronize their movements (along with the drummer) to create giant, clanging start-stop grooves, and those cold and crushing impacts also contribute to the music’s alien atmosphere.

In between and around those jackhammering impacts the guitarists create maniacally darting, quivering, and seething sensations that seem to channel inhuman madness. Bits of slowly slithering melody worm through parts of the song, further enhancing the music’s sinister viciousness and off-planet atmosphere — which becomes most pronounced in the track’s strange and oppressive ambient outro.

Drummer Fesenko doesn’t appear in the video, but you can hear his vivid contributions, playing off of what the string-slingers are doing and joining in with them to magnify the music bone-smashing barbarity. You can’t even hear vocalist Kutsenko in the video, of course, but in the EP recording his horrid growling roars and flesh-eating screams dial up the song’s savage cruelty.

Lieweaver have commented about The Origin as follows: “Our EP is an attempt to combine Deathcore and Death Metal with some dark ambient and throat singing. It took us 1.5 years from releasing our first single to finish our EP, but we are satisfied with the result and we are not ashamed to show our creation to everyone! In our next releases we will continue to mix the genres we love and we’ll create something even more atmospheric and heavy!”

You can pick up the EP via the link below, and as further inducement we’ve included a complete stream of its five tracks.