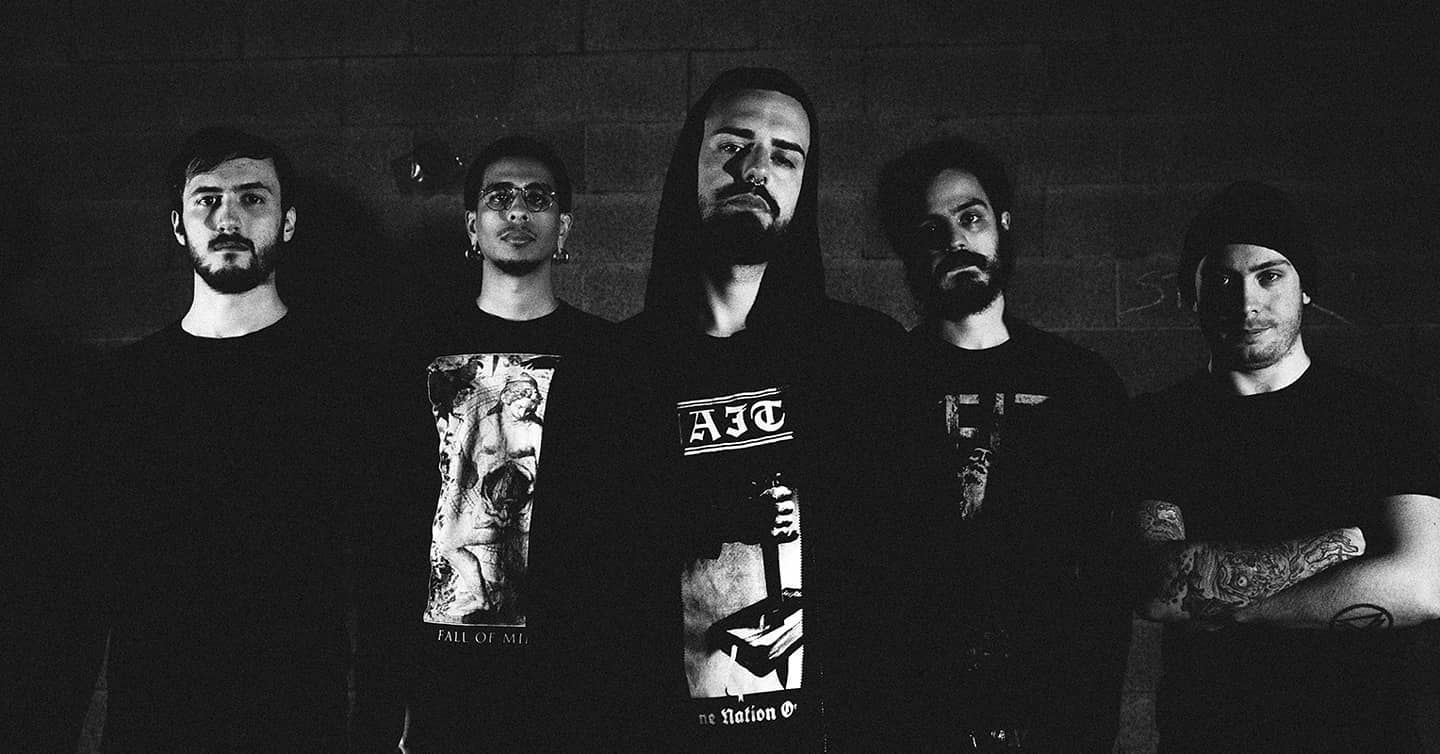 Italian quintet Noise Trail Immersion are a perfect example of how the words we use to describe artists can have a big impact on how they’re perceived by potential listeners.

Case in point, you’ll often see them described as a Mathcore band – that’s apparently why Metal Archives won’t feature them – but that overly-simplistic designation fully fails to capture the totality of their sound, which is just as much an amalgam of chaotic Black Metal, Blackened Grind, and Dissonant Death Metal (and more).

But however you choose to describe them, with four albums under their belt – the most recent of which was released just last week – Noise Trail Immersion are long past due a major feature here at NCS, which is why I’ve chosen them for this edition of The Synn Report.

The band’s self-titled debut (Is it an album? Is it an EP? Different sources say different things…) is probably the closest they come to being a “Mathcore” band, as while there’s definitely a fair bit of Botch and/or War From A Harlot’s Mouth influence underpinning the jarring spasms and jittery discordance of tracks like “We Are Sleeping” and “40 Days” (the record’s mordantly metallic opening pairing) the chunky, down-tuned riffing and precise, punishing drum work give the music a much meatier and more muscular structure in the vein of more NCS-friendly bands like Car Bomb and Ion Dissonance.

“No Eye to Reality” similarly combines, elasticated, Meshuggah-influenced guitar work and rapid-fire, seemingly random, percussive patterns into an off-kilter Grind/Groove amalgam which, ultimately, proves to have far more method to its apparent madness that it first seems, after which the band throw the first of what will, in days to come, prove to be many unexpected curve-balls with the moody, Post-Metal-inflected strains of “Drowsiness”.

Of course, as if to prove they’re not suddenly going soft, “Wolves In Plain Clothes” hits even harder than the rest of the album, its scattershot blasts and finger-flensing fretwork landing somewhere between early Fawn Limbs and the discordant disturbance of latter-day Cryptopsy, after which – following on from the track’s subtly melodic and cathartically groovesome finale – “The Drift of Perceptible” doubles down on the lurching, low-end riffage, jerky, juddering rhythms, and erratic explosions of twisted technicality while also finding some extra space for some lengthy excursions into proggy instrumental ambience at the same time.

Womb is, without a doubt, a dramatic step-up from the band’s debut. Faster, tighter, more focussed, more intense, it displays an even more violent and visceral side of the band which, while still thrillingly chaotic on first impression – although this time it’s clearly much more controlled chaos – feels like the product of a band firing on all cylinders, all in the same direction, and maximising their destructive potential.

Take “In Somnis”, for example, the album’s first “full” song, which follows on from atmospheric, anticipation-building opener “Border”.

While the riffs are a razor-wire tangle of jagged chords, brutish chugs, and twisted tremolo, there’s a scathing, blackened undercurrent to the track – as well as several subtle-but-effective splashes of eerie melody – which suggests that it owes just as much Deathspell Omega as The Dillinger Escape Plan, foreshadowing the even darker direction the band would go on to follow in years to come.

The band continue to build in this more Black Metal inspired direction on “Light Eaters” – just under four minutes of twitchy, anxiety-inducing guitar work and spiteful, strafing blasts – while also injecting some almost Post-Metal influenced moments of melancholy melody and meditative atmosphere to counterbalance all the devastation and disorder, after which the angular aggression of “Placenta” hearkens back a little more to the metallic Mathcore feel of their debut, with a blend of scathing dissonance and punchy, pneumatic rhythms reminiscent of Frontierer, albeit with a more brittle, biting edge.

The title-track is seven-and-a-half minutes of haunting, Horror Movie ambience which serves as an effective fire-break right in the middle of the record, allowing the listener a bit of time to collect their discombobulated thoughts while also ensuring that the album’s madcap momentum remains under control, enabling the ultra-intense, almost uncategorisable (Blackened Tech-Grind maybe?) assault of “Organism” to hit twice as hard, and twice as harshly, with its abrasive amalgam of ear-scraping riffs, nerve-jangling bass lines, and warped, whiplash-causing drums.

At just (and I do mean just) under two minutes, “Hypnagogic” is a charismatic enigma of a track, effectively a Post-Metal song whittled down to Grindcore length, and once again demonstrates how Noise Trail Immersion are clearly playing by a different set of rules to the rest of us, before the Fawn Limbs-esque “Tongueless” – half whirling dervish of dissonant destruction, half sinister slow-burn of film-noir fog – seals this as an indisputable fact.

Closing with the ambitious, almost cinematic, strains of “Birth”, you can clearly see and hear that on Womb the band not only found their footing but began to forge themselves a new and distinct identity, bringing together all their disparate early influences – and adding a few more – to create something not quite Mathcore, not quite Grind, not quite Black or Death Metal, but potentially capable of appealing to fans of each.

PS – you can also pick up the vinyl-only bonus track “Deadly Blessings” from the group’s Bandcamp page now, which I highly recommend you do, because it’s a nasty little piece of distorted aggression and dissonant melody which really signposts where the band’s sound is headed next.

If there’s only one album by Noise Trail Immersion that you choose to listen to after reading this article… make it this one.

Kicking in hard with the ferocious instrumental intensity and fire-breathing vocals of “Mirroring” – balancing on a knife-edge between blackened, chaotic, technical and discordant… while also being subtly and surprisingly groovy and atmospheric at the same time – you can immediately sense that not only are the band even more comfortable in their own skin this time around but they’re also even more confident and even more capable of pushing themselves even further.

This quickly become even more apparent during the subsequent two-parter, “Repulsion and Escapism”, which combines mind-mangling, dissonant Death Metal riffage a la Ulcerate with an undercurrent of discordant Black Metal menace and shades of gloomy melody – showcasing both the rich, roughly-abraded texture of the guitars and the intelligent intensity driving the ever-impressive drumming – before transforming into something even more acerbicly atmospheric, equal parts Post-Metal, Tech Death, and Grind, during its second half.

What really sets this album apart from its predecessors however – even as it builds on the foundation they laid down – is the greater sense of space and deliberate structure inherent in each and every track.

It’s still a wild and unpredictable ride, that’s for sure, but there’s a much clearer method to the madness, such as the way that the various guitar parts – sometimes competing, sometimes complementary, sometimes wholly contradictory in nature – are woven together, or how the diverse segments of each song are given more time to breathe, brood, and build towards something greater than themselves.

“Acrimonious” is a great example of this, in the way it threads the needle between Botch, Dodechaedron, Gorguts to create something greater than the mere sum of its parts, but the real gold is found in “The Empty Earth”, which uses its extravagant eighteen-and-a-half minute run-time (split up into two parts) to allow the atmosphere and ambience, tension and immersion, to slowly but surely escalate into an explosion of vibrant, violent life, only to collapse once more into haunting doom and gloom as they cycle begins all over again.

Closing with the tumultuous title-track – eight minutes of lumbering, low-end riffs, asphyxiating atmospherics, and screeching pseudo-melodies – Symbology of Shelter is the sound of a band reaching the absolute apex of its evolutionary arc. The only question is… where does that leave them to go next?

It’s not a total reinvention by any means – the cathartic eruptions of calculated chaos still leave a nasty mark whenever they appear – but you can tell, from the moment that sombre acoustic instrumental “Riesistere – I” introduces you to a whole new side of the band, that things are going to bedifferent this time around.

Of course, this is just the calm before the storm, as the anguished howls and caustic dischords of “Demiurgo del non ritorno” soon raise the intensity levels to a familiar level of ferocity, but even here you can sense that Noise Trail Immersion have changed their modus operandi somewhat, abandoning the Mathcore-influenced mayhem of their previous works almost entirely in favour of a more cohesive, though still incredibly complex, sound that positively pulses with blackened dissonance and moody, Post-Metal-inspired atmosphere.

“Dimorare nella carne” continues in a similar vein, its twisted skeins of seething guitar work, equal parts melody and discordance, giving the track a grim grandeur not too far removed from Wake’s masterful Devouring Ruin, while the second half of the song finds the band further expanding on the more open and spacious side of their songwriting from Symbology of Shelter.

While the latter half of the previous track actually reminds me, in places of early The Ocean, “Vanente” really doubles down on these comparisons with its proggy, rhythmic drum work, slow-building intensity, and unexpectedly effective injections of cathartic clean vocals, suggesting that Curia may well just be the first step down a much more progressive and atmosphere-focussed path for the band.

Following on from the moody interlude of “Riesistere – II”,“Eclissi Unanime” further solidifies these sonic similarities to the early work of the German Post-Metal collective with its dark, doomy pace and sorrowful, cinematic strings, after which the title track serves almost as an instrumental coda to this song, picking up right where it leaves off and expanding its scope into something that could just as easily be described as Post-Black Metal, or Post-Mathcore, depending on which angle you view it from.

In many ways, that’s the real key to Curia – it’s an album of many different facets, from the avant-garde, post-Ulcerate atmosphere of “Coercizione” to the spiky intensity and subtle melody of the Planks-esque “Il grande confine”, and as such you’re likely to discover something new about it, some new way to look at or listen to it, with each and every spin.