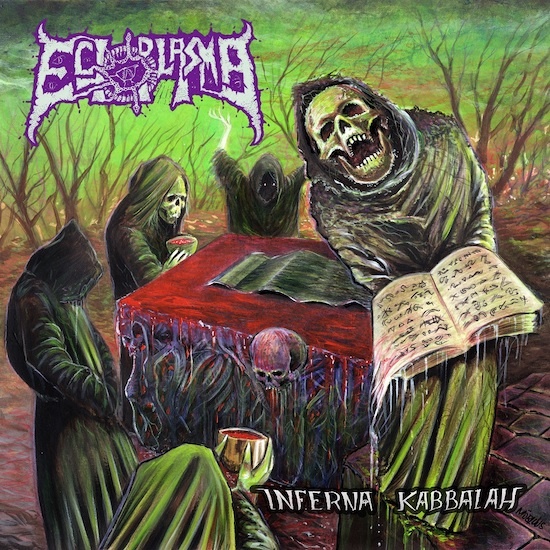 Anyone already familiar with the Greek death metal band Ectoplasma knows they are capable of inflicting a severe beating while simultaneously leading listeners through realms of grotesque, ghastly, and utterly unearthly terror. But what makes Ectoplasma stand out even more from the pack of current bands who revel in ghoulish vintage death metal is the extent to which they integrate attention-grabbing twists and turns as they drag and rush listeners through their sonic horror-scapes.

That talent has been the cause of us writing about them frequently in the past, including hosting a pair of premieres from their earlier releases, and it’s the cause of us doing that again today. This time we bring you the aptly-named “Appalling Abominations” from their forthcoming fourth album, Inferna Kabbalah, which will be released on January 24th by Memento Mori (CD) and Rotted Life (vinyl and cassette).

Originally started back in 2012 by Giannis Grim (Carnal Dread, Humanity Zero, Death Trap, Vultur) and George Wolf (Forced In, Dismal Chant, Vultur), the band’s line-up has both expanded and contracted in the ensuing years, but has never weakened in its zealous devotion to death metal of the late ’80s and early ’90s.

In its current incarnation founder Giannis Grim is still at the helm (handling vocals, guitars, and bass), now joined by elite drummer Dimitris Sakkas. Together, as the releasing labels accurately proclaim, they have made Inferna Kabbalah arguably the band’s most punishing and polished record yet. But make no mistake, the relative sharpness of the sound in no way diminishes its crushing, slaughtering, and blood-congealing impact. Today’s new preview track provides a vivid demonstration of that.

“Appalling Abomination” includes an extended introductory segment before the vocals come alive in all their horrid, roaring glory. The music stomps and towers, pulsates and quivers with creepy energy, and jitters and jolts with increasing speed as the dual guitars create a ghoulish harmony and the drumming remorselessly delivers sledgehammer blows and bullet-spitting outbursts. And that’s just the opening minute and a half.

From there Ectoplasma engage in a surging tank attack laced with feverish fretwork. The sounds jackhammer the listener’s skull and swarm the mind. The riffing and the rhythms change repeatedly, making effective use of both channel separation in the guitars and Sakkas‘s varying percussive patterns. The execution is needle-sharp, the sounds have a cutting clarity, but the overarching effect is one of savage, unhinged mania.

If you’re only now discovering the existence of this new album, the timing is good, because we’re also able to provide streams of two other previously released preview tracks, “God Is Dead, Satan Lives” and “Gruesome Sacred Orgasms” (which of course are the best kind). Both of these tracks, combined with the one we’re presenting today, provide an even more vivid demonstration of Ectoplasma‘s formidable powers.

And lastly, let’s ask Mörtuus to take a bow for creating yet another attention-grabbing and completely complementary cover painting for Ectoplasma‘s newest work.