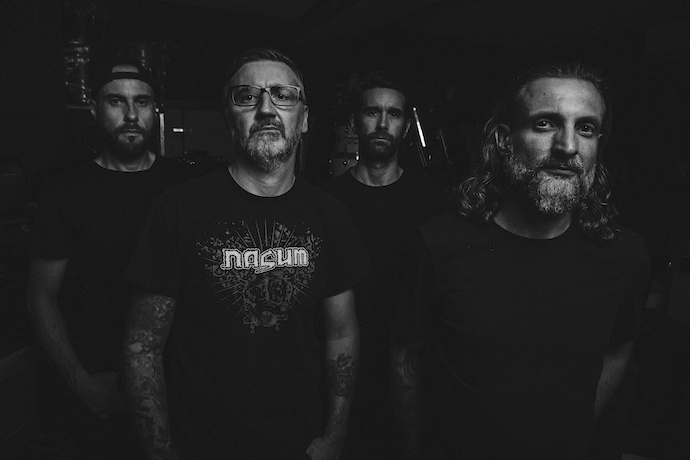 The French crust/hardcore/grind band Feral chose their name for a reason that becomes obvious when you listen to their second album Spiritual Void. They attack almost relentlessly, with raw, no-holds-barred intensity — intensity that comes through in both the emotional fuel of the music and in its mauling and pulverizing sonic power. It is musical catharsis of a very high order.

The album is set for release on January 21st through Source Atone Records and Basement Apes Industries. For very good reason they recommend it for fans of All Pigs Must Die, Cursed, Napalm Death, and Trap Them (and we might add Misery Index and Rotten Sound to that list). You’ll understand the basis for those recommendations when you hear our premiere stream of the entire album… a handful of paragraphs from now. 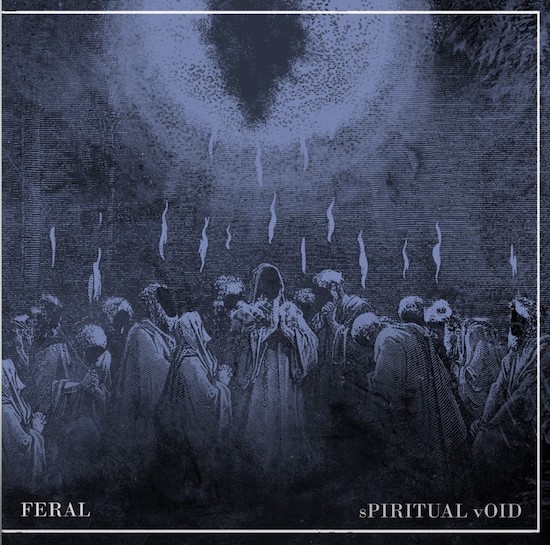 Feral chose “The Great Reset” for an official video that was released to announce Spiritual Void and to provide a preview of what was coming. It’s a compact track, but Feral put a lot into it, providing a changing barrage of rage and bleakness. The rhythms change rapidly, but inflict a relentless beating. The chainsaw-toned riffing and shrill leads frequently change as well — slashing and blaring, boiling and jolting, writhing and moaning, locking into sledgehammer grooves and needling like a dentist’s drill. Buttressing the anger in the song, the vocals are a scraped-raw, scorched-earth fury.

“The Great Reset” is the ninth track on this 12-track album. Before you get to it (following a spooky intro track), and then again afterward, Feral run you through a sonic gauntlet. Like “The Great Reset”, the other tracks are mostly short and savage, propelled by drumming that gallops, blasts, scampers, and pounds like big pistons, coupled with gut-slugging bass lines, blast-furnace riffing, and crazed leads that whine and convulse.

But Feral don’t stay in one gear, either in tempo or in mood. Without warning they drop into cave-in breakdowns, slowing the pace in order to inflict titanic, neck-bending, pile-driver blows and drag the mood into depths of misery, abandonment, or cold disgust. Even when they’re operating with a wide-open throttle, there’s often a feeling of desperation in the marauding riffs — as well as unchained ferocity.

The fast-shifting tempos and rapidly morphing rhythmic patterns, and all the sudden stops and starts, will keep listeners on their toes. The crazed fretwork frequently feels like it’s clawing at your sanity, but the music also groans in agony, churns like massive super-heated excavating machines, and explodes in demonstrations of unhinged violence. And there’s no relent in the white-hot intensity of the throat-ruining vocals, the raw sounds of a man being torn apart from the inside out.

Of all the songs, “Eyes painted on the cross” is one of the longest and most dynamic, and probably the best example of everything Feral bring to the table. You’ll find it at the 14:25 mark in the album stream we’re providing. Right after it, “Real wars” delivers probably the most bone-smashing grooves.

But every song is capable of beating you senseless, kicking your adrenaline levels sky-high,  applying a blowtorch to your face, and providing a wide-open channel for everything that pisses you off. See for yourselves:

Spiritual Void is the follow-on to Feral‘s 2016 debut album Doomwalk. That six-year gap is a big one, but it’s obvious that they used the time well. The album is available for order on vinyl LP, CD, and cassette tape formats.

One Response to “AN NCS ALBUM PREMIERE (AND A REVIEW): FERAL — “SPIRITUAL VOID””