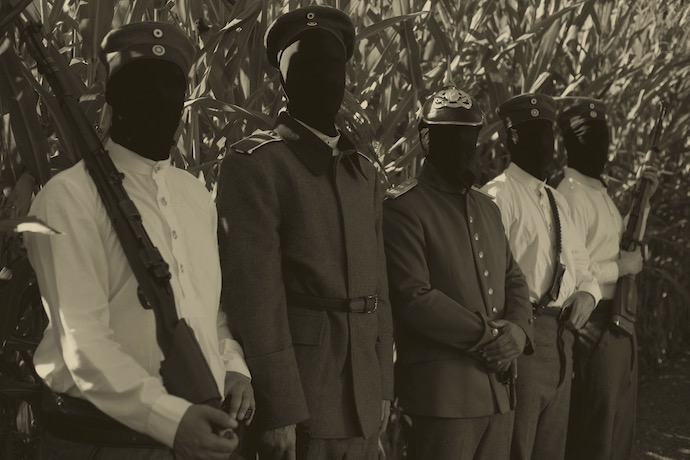 (Andy Synn takes over SEEN AND HEARD to present a trio of tracks you should pay attention to.)

Sadly Islander has, as is not uncommon, been swamped by the pressures of his day job (being a world-class rocket-sled racer is a high pressure career after all) so it has fallen to me to pull something together for the end of the day.

Thankfully I had two of these recommendations already waiting in the chamber, with the third making an appearance as I was writing it, so there’s still more than enough metallic goodness to go around, even if this particular edition of “Seen and Heard” is a little more abbreviated than normal.

Look, we loved the grisly Black/Death balladry of Menschenmühle, the debut album from Germany’s Kanonenfieber. You loved it too. And it looks like Black Dahlia Murder frontman Trevor Strnad also loved what he heard, considering he makes a guest appearance on the first single of the band’s upcoming EP, Yankee Division (the video for which you can see above).

As bleak and as blistering as ever, the song reveals a slightly more polished, though just as punishing, version of the band’s signature sound, one which occasionally errs a little more towards the God Dethroned/1914 side of things, while still maintaining a core of vital, venomous Black Metal at its heart.

There also seems – to my ears at least – to be an even greater emphasis on morose melody and melancholy atmosphere (especially towards the end of the track), although not – it must be noted – at the cost of any of the band’s traditional power or intensity.

But, hey, don’t just take my word for it. Give it a listen for yourselves!

OCEAN OF ENTROPY – THE SUMMER RAIN

Ocean of Entropy are a new band… so new, in fact, that what we’ve got here for you is the very first piece of music they’ve officially released, courtesy of a lyric video that just premiered over at The Circle Pit.

The band is made up of two members, vocalist Marco Alvarado and guitarist/song-writer Shindy Reehal – the latter of whom you may recognise as the artist behind album covers for Alustrium, Osiah, and our very own Beyond Grace, among others.

That’s not the reason we’ve chosen to feature it here, however, as the music certainly speaks for itself, delivering a lethal cocktail of raging riffs, devastating drums, and vicious, visceral vocals over the course of five ferocious minutes.

But just like a good cocktail depends not just on the ingredients but on the measurements of those ingredients, so too does “The Summer Rain”, which balances a lot of different influences and elements – a twist of subtle technicality here, a dash of djenty groove there, plus the occasional morsel of moody melody – around a core of dense, Deathcore-ish heaviness.

PYREXIA – THE DAY THE EARTH SHOOK

Sadly we didn’t get around to writing much about Gravitas Maximus, the (fantastic) new album from New York-based brutalisers Pyrexia, last year, although I took time to include it as one of the “Great” albums of 2021, calling it:

“[an] absolutely lethal late-entry [and] a perfect soundtrack to the inevitable zombie-ape apocalypse if ever I’ve heard one.”

As if to demonstrate just how right he was, the band recently dropped a new video for “The Day the Earth Shook”, one of the record’s most crushingly catchy and undeniably nasty tracks (although, to be fair, every single song is somehow simultaneously both stupidly hooky and stunningly heavy – it is an excellent album, after all).

It’s a perfect example of the way in which the band seamlessly marry primitive groove and merciless precision – it takes a very smart band to be this defiantly, devastatingly dumb, make no mistake – and should hopefully lead more people to check out not just their latest (and arguably best) album, but their entire back-catalogue.