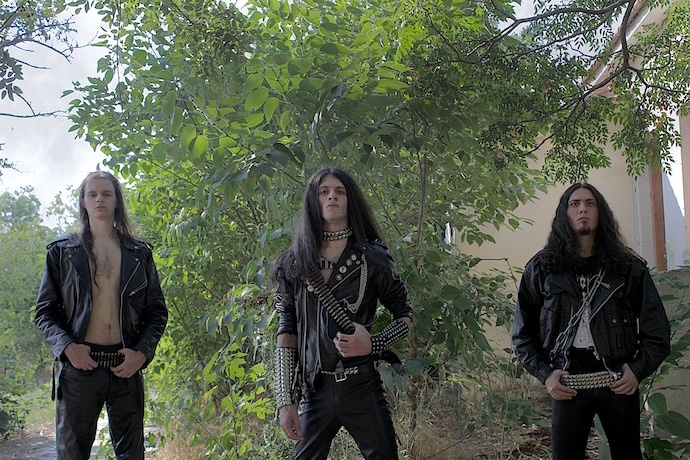 Vicious Knights‘ debut album — Alteration Through Possession — is exceedingly well-named. The band sound possessed, and their music will indeed create both chilling and exhilarating alterations in your mind.

They produce these effects by invoking the old spirits of early Kreator, Destruction, Possessed, and Sepultura, and creating both lyrical and musical themes that conjure ancient horrors. It takes little time at all to realize that this Greek trio are both formidable songwriters, with an almost preternatural talent for crafting hooks while establishing atmosphere, and top-shelf instrumentalists.

And thus it’s with great pleasure that today we present a full stream of the album in advance of its imminent January 28 release by Dying Victims Productions. 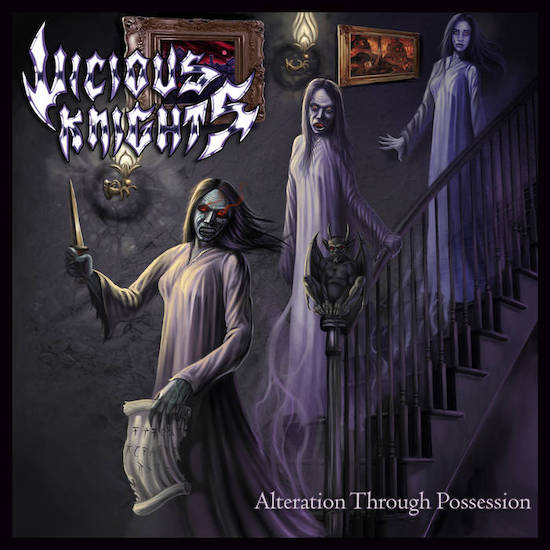 After a short (and horrific) introductory track, the band surge through eight tracks of death/thrashing ferocity and madness. The drums pump like pistons and blast like heavy-caliber automatic weaponry, the bass bubbles like a cauldron, the rapidly buzzing guitars swarm and slash, swirl and soar, and the serrated-edge vocals are rabid and scalding.

The riffs are the key ingredients, and have the strength to spread the music like a contagion against which there is no immunity. They heat up the blood like a fever and they’re immediately infectious. Within each song the band sharply twist and turn them (and vary the drum patterns and tempos as well) generating sensations of occult menace, ruthless evil, and savage ecstasy. Insanity reins in some of the songs, and others raise glorious spectres from their crypts in visions of hideous majesty.

As the song titles themselves forecast, a frightening supernatural aura shrouds the music at all times, whether the band are racing like wolves or lurching like undead golems. The guitar solos are also supernatural — in the sense that they’re often so fast and so berserk in their superheated yet remarkably fluid intensity that they don’t seem to be the work of a mere mortal (check out “Sleep With the Ghouls” for a prime example, but there are many more). But even when the soloing is less crazed and more steeped in misery (as in “They Cast No Shadow”), they’re still spine-tingling.

On the whole, the album will keep your adrenaline levels high, but with enough variations in momentum and mood to keep you on the edge of your seats at the same time, and they also bring to bear a lot of evocative and enticing melodies (as merely one of many examples, we point you to the almost medieval-sounding intro to “Swing From the Grave”). And by the way, don’t miss the chance to get a big smile from the little bass-and-drum duet that pops up in the closing track.

In short, Alteration Through Possession should appeal mightily to any hungry fan of evil old-school thrash, brought forward to the present with exceptional skill and fireball intensity.

Vicious Knights hail from Thessaloniki, Greece, and include the talents of guitarist/vocalist Antonis “Harvester”, drummer Liakos, and bassist Panos.

Dying Victims Productions will release the album on CD and vinyl LP formats, as well as digitally. Pre-orders are available now.