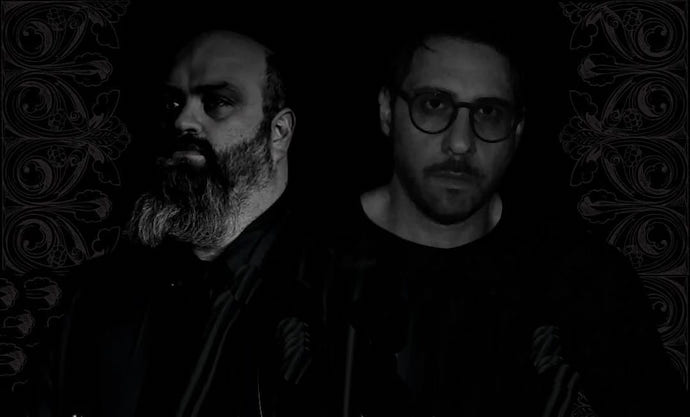 (In this new interview Comrade Aleks had a conversation with John Suffering, vocalist/lyricist of the international doom/death band Forever Falling, and a member of Chalice of Suffering and Solemn Echoes.)

Forever Falling is a virtual project of Italian multi-instrumentlist Tullio Carleo (Gods of Sadness, Voyage Noir) and American vocalist John Suffering (Chalice of Suffering, Laceratory, Solemn Echoes). Tullio is into black and gothic doom stuff, as John registers deep guttural growls and does his best to make doom great again. They found a common ground in death-doom territories naturally, and this common interest led to the creation of Forever Falling and the recording of the album Suspended Over the Immanent.

John told us a few things about this project, as well as about other things he’s occupied with  nowadays.

Hi John! How are you? How productive was 2021 for you? There were two albums released with your participation – by Solemn Echoes and Forever Falling, and that seems like a good result, what do you think?

I am doing well thank you for asking. 2021 was actually pretty active. Busy with a lot of things like creating new music, releasing two albums, and family. I do feel that it was also a good result, because we got some great reviews on both albums.

On the other hand there was no news from your “main band” Chalice of Suffering. What’s its status?

Chalice is now working on our 3rd album. I am very excited about this next one. We have some great musician guests. We will have more bagpipes and I feel this one will be more emotional and deep compared to the other ones. Not sure how it is, but it is just a feeling that I am getting when the lyrics are being written.

Good news! Bagpipes is a huge benefit for doom music! And they fit Chalice of Suffering perfectly. Will this new material keep the direction of Lost Eternally?

Yes it will be kept in that direction. I do feel like it is something that makes us stand out, and plus… I enjoy it. Lol.

John, how were you involved in Forever Falling? I see that Tullio Carleo used to run solo projects, so I’m wondering if he needed special vocals.

Myself and Tullio were partners in this project. Like a 50/50 split on the project. He worked on the instrumentals and I worked on the lyrics. So we both gave each other our creative freedoms. To me it is great ’cause we both feed off of each other.

How did you discuss your role in Suspended Over the Immanent? Did you work over the album’s concept together? How long did you actually work on it?

My role on the album was on the lyrics. I have plenty of songs to pick from that I have on my computer, so I went through them and made some modifications as time goes on. What Tullio and myself did was we picked certain bands that we both really enjoyed and drew some inspiration from each band. Like what guitar tone, drum sound and the vocal styles of each.

We worked on it for about 3-4 months total. I felt that both of us were on the same page when it came to our visions of what we were looking for.

What kinds of bands did inspire both of you during the work on Suspended Over the Immanent?

The bands that inspired us were Paradise Lost and Swallow the Sun.  I think you get the same emotions and atmosphere when you do hear Forever Falling and those other two side-by-side.

How do you see the differences between the work you did for Solemn Echoes’ and Forever Falling’s albums?

For me there are some big differences. Solemn is more drastic when it came to depression and sorrow. For example: Like I can not handle this much crap anymore and my mind and emotions are telling me to do something more drastic to myself.  As to Forever Falling, it is more emotional pain and suffering. Mostly emotional pain, like I feel like I am carrying around my emotions and cannot get out of it.

How natural is it for you to write lyrics in this vein? Do you ever have a lack of enthusiasm or inspiration for this task?

It does come natural for me to write the lyrics. I do suffer from anxiety and depression. I also write things down when a major personal event comes up, like a death of a family member or a loved one. But yes, sometimes I do lack the enthusiasm to write down the lyrics. When that does happen, I try to take a break from writing and do something else. When I get back all refreshed with more of a clear mind, I start writing again.

Did it really work this way? Did involvement in creating down-tuned music help to ease the pressure of down-tuned moods?

Yes it did. Sometimes you just need to take a breather and come back to it. Sometimes I do listen to down-tuned music, but I also do listen to a lot of different styles of music (except rap).

John you have collaborated with members of different bands from different parts of the world. But what about the local scene? Which bands would you recommend as examples of modern US doom death?

Some of the local US doom death bands in my home state that I would recommend are: Witchden, Void Rot, Ulkum, Living Through Ghosts, and not a doom death band Grief Collector.

But other US Doom Death bands I would recommend are: Elusive Travel, Novembers Doom, Temple of Void, and Aequorea. There are plenty of others, just too many to mention.

Thanks! Some new names finally! : ) But… you mentioned sludge and post-oriented bands among others. So what does doom metal mean for you and, let’s say, your surrounding? I know a few different points and all of them are related to different parts of the world. For example, here in Russia historically “doom” meant “doom death” (UK Three, etc.); in Europe “doom” is usually “traditional doom” and only after that “doom death”. We had a kind of disagreement with one guy from Spain who asked me about the “50 most important doom albums” and replied to me then that “Pentagram, Saint Vitus and etc. aren’t doom METAL in Spain because they are more about ROCK”. And in the end I read J.J. Anselmi’s Doomed to Failed book who shows this “American view”, with emphasis on stoner, drone, sludge and post-doom, which are like anathema for real purists. So… well… what did I ask? What do you think about that?

For me I feel that the American view is around what you said. But also include Traditional Doom. Like bands such as Saint Vitus, Trouble, Cathedral, Black Sabbath. I feel those areas are more popular here. Other types of doom are making the rise here like the Doom Death acts. Funeral Doom is big, but not as big as it is in Europe.

I read a USBM book by Daniel Lake, I explored the early US doom underground when I was gathering material for the Doom Metal Lexicanum books. And it seems strange that both black metal and death doom were presented by very few bands in the ’90s when these genres were blooming in Europe. How do you see this situation? Should we blame grunge and alternative music for this?

We can blame grunge for this all. Which I would, lol. But I feel that doom was only exposed to us with Black Sabbath, Trouble, Saint Vitus, Cathedral and Solitude Aeturnus. Of course there were some other acts out there. But that style was not popular or even got a well-deserved push. In the ’90s it was all about image, now people don’t give a shit about it. Lol.

What are your plans for 2022? Are there any other recordings planned?

My plan for 2022 is to get the new Chalice of Suffering album out. Then also to get the new Forever Falling album out there. Since we are working on that one now. Solemn Echoes is starting to record our 2nd album this year. So I feel that this year will be big and also very, very exciting.

Thank you so much.